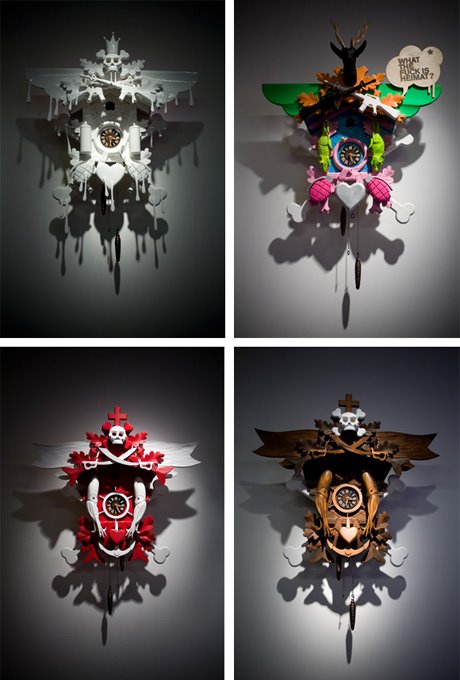 Cuckoo clocks have always been fixtures for a different era, back when wallclocks weren’t in vogue and people didn’t use their cell phones for alarms.  For the most part, they’re just boring and outdated, destined to look severely out of place in many modern homes.

Stefan Strumble just might have the antidote, though, with his new series of clocks that come decked out in busy, edgy and just plain fascinating designs.  Heavily involved in the German street art and graffiti scene, the influence shines through in the oversized creations, which feature artifacts not typically found in traditional timepieces.

In Stefan’s hands, the cuckoo clocks get outfitted in garish and outlandish costumes, ensembles more suited to a graffiti wall than a classic home fixture.  In place of carved wooden panels and bird designs, they end up with an array of objects more attuned to modern youth fascinations, including skulls, crossbones, guns and grenades.  He uses spray paint and silk screen printing for finish, which gives the clocks a pop art feel.

Few of us probably thought we’d ever invite a cuckoo clock up in our wall, much less call it hip.  These things, however, are just way too cool not to drool over.   According the Stefan, even The German Cuckoo Clock Association supports his work.

Check out these Cool Clocks available on web now.