Stompy Is A Giant, Six-Legged Robot You Can Operate 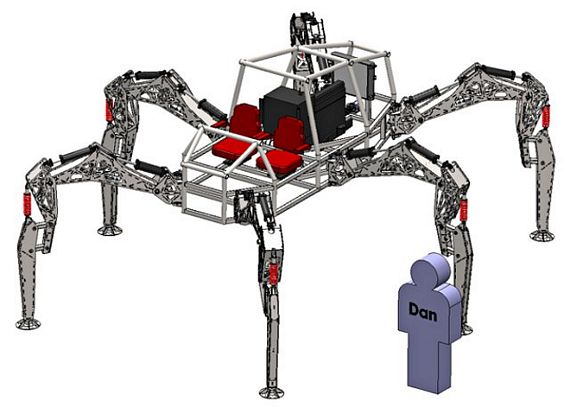 In case you missed the news, you can now buy your own giant robot.  If you don’t quite have the stacks of money such a purchase requires, then riding a giant robot doesn’t sound so bad of an experience to settle for.  The Stompy’s creators are offering just that — a ride atop a 6-legged monster bot just like a proper supervillain.

Designed by a crew of robot builders from Massachusets called Project Hexapod, it’s a large-scale robot that you can commandeer just like a car. Instead of rolling on wheels, though, it moves using six spider-like limbs, allowing the mechanical beast to travel over rugged terrain while crushing puny obstacles in its path.

The Stompy is an engine-powered hydraulic walking robot that can ride two people atop its open-air cabin.   Since robots are more fun when they’re big, it obliges, measuring 18 feet wide and weighing 4,000 pounds.  Movement is slow, though — it can only travel at 3 mph max.  While the group (who work out of Artisan’s Asylum) have already built various parts of the machine, they are still in the process of doing more and have turned to Kickstarter to speed up the project’s funding.

What is it for?  From what we can tell, they want to take it to maker festivals and the like as a giant robot ride, which is almost guaranteed to make it a hit.  However, it has utilitarian purposes, too — it can carry loads up to 4,000 pounds (although that much weight will slow it down to 1 mph) even over difficult terrain, potentially making it useful for rescue missions and numerous offsite industrial applications.

More interestingly, though, the group is developing it as an open tech.  Once finished, all plans and designs will be made publicly available, allowing third parties to develop similar robots to ensure hexapods become part of our seemingly imminent robot-infested future.

Since this is an expensive giant robot, offering to sell Stompies isn’t quite the most sound plan to lure investors in, so they settled on various “sponsorship” levels instead.  Depending on what you pay, you can opt to have a hand in decorating the robot, get a business logo on there or even test it out for a ride once it’s done.  Oh yeah, you can reserve yourself one giant Stompy, too, but you’ll need to make a $300,000 pledge (not so bad, considering how much that other giant robot costs).