Play Like You’re In 1980s Hawkins, Indiana With The Stranger Things Arcade Game 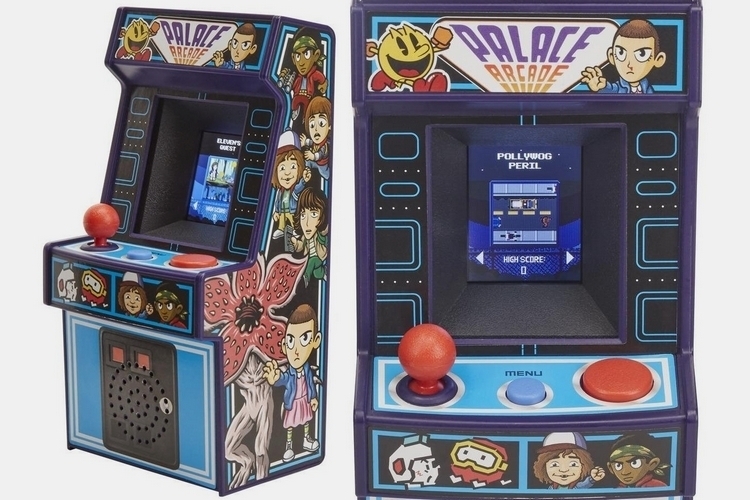 Netflix has plenty of original shows. And they have plenty of shows we watch. No matter which one you consider your favorite, though, you have to admit there’s no Netflix original that brings more hype than that 80s-style sci-fi show set in Hawkins, Indiana. And if you’ve got serious jonesing for the upcoming season, you could calm down the nerves with some classic arcade gameplay on the Stranger Things Palace Arcade Handheld Game instead.

A handheld toy, it’s a miniature arcade cabinet that can be set down on a table for old-school button mashing or carried in your hand for some old-school gaming on-the-go containing some of the games you’d be playing with the kids if you ever run into them at an arcade back in the 80s. Whether you want to chase ghosts in Pac-Man, burrow tunnels in Dig Dug, or play any of the other preloaded games, this thing lets you do that with a Stranger Things twist. 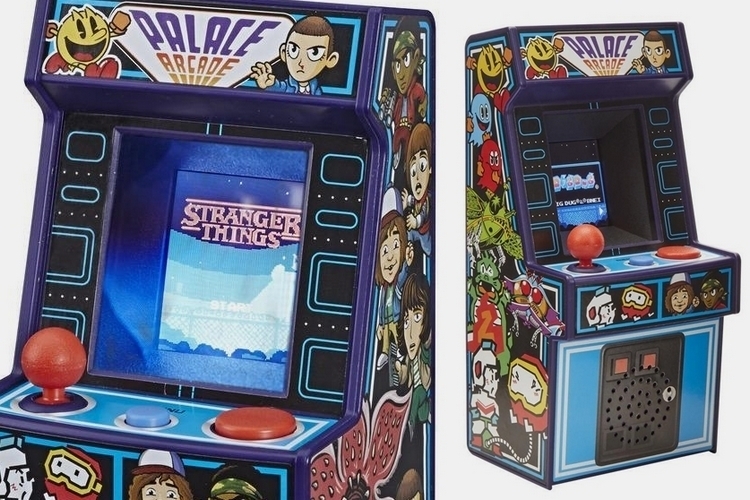 The Stranger Things Palace Arcade Handheld Game is, pretty much, a regular mini-arcade, with a tiny vertical-oriented screen, a joystick, an action button, and, of course, a power button for switching it on and off. It takes on the appearance of traditional arcade rigs, complete with coin slots at the bottom half, detailed cabinet artwork, and that unforgettable classic shape, except in a size that’s small enough that you can cradle it in your hands for handheld gameplay.

Being a licensed toy from the Netflix show, the cabinet is covered in Stranger Things livery, complete with a graphic of Eleven conjuring her magical abilities while blood drips slowly down her nose right next to a Pac-Man on the run. The rest of the cabinet puts the spotlight on the main figures of the show on the left side, with Mike, Dustin, Lucas, and Will adorning its walls right next to Eleven and the evil Demogorgon, and classic retro gaming characters on the right. 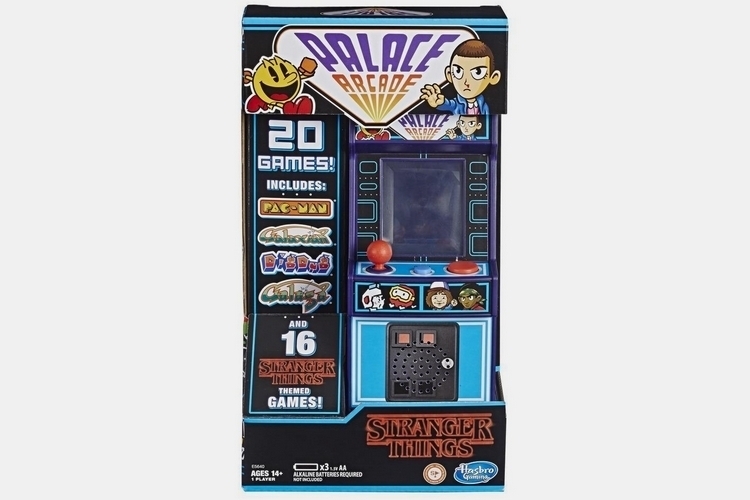 The Stranger Things Palace Arcade Handheld Game is preloaded with 20 games, including four licensed titles from the 80s, namely Pac-Man, Dig-Dug, Galaxian, and Galaga for all the retro enthusiasts looking to get to get their classic gaming fix. Joining it are 16 new titles based on 80s-era gameplay mechanics, each one done up with a Stranger Things theme, so you can play maze runners, stationary shooters, and puzzles reminiscent of the strange occurrences in Hawkins, Indiana while waiting for Netflix to finally drop the show’s newest season.

A full-color screen allows you to enjoy the games in modern colors, while an integrated speaker at the bottom half of the cabinet provides all the bleeping-and-blooping audio accompaniment. Since the coin slots aren’t functional (and won’t fit actual coins anyway), you keep the games going with a steady stream of 1.5-volt AA batteries, three of which will need to be ensconced in the battery slot at all times.

Whether you’re a big fan of the show, an arcade gaming diehard, or just some dude who likes their old-school games with a modern pop culture twist, the Stranger Things Palace Arcade Handheld Game should make for some fun times. It’s available now, priced at $29.99.