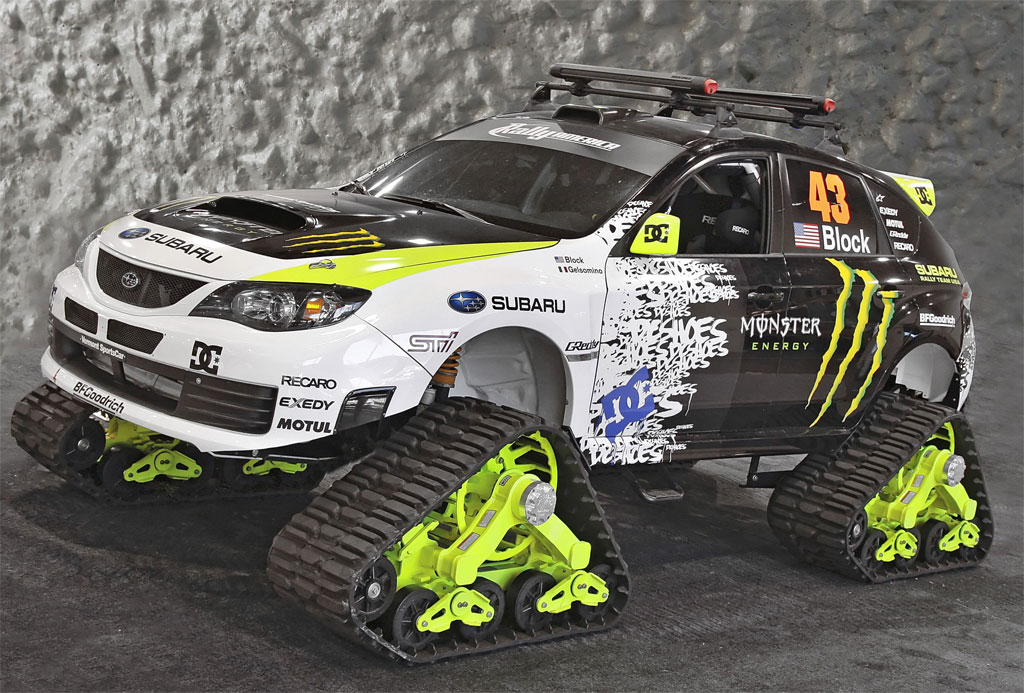 “To heck with snow tires, I want to plow through the friggin’ snow!” That must be what SRT USA driver Ken Block screamed in order to get this baby: the Subaru WRX STI TRAX, which comes equipped with a crazy-ass snow tracks system.

Shown off at SEMA 2009, the winter warrior was built by Vermont Sports Car, who based it on the #43 SRT USA competition STI that Block also drove. The team began with a stock WRX STI, gutted the cabin, threw in RECARO SPA ProRacer competition sport seats, lightened the shell (including using carbon-fiber door panels), seam-welded it for added strength and installed a protective steel roll cage.

The TRAX uses a turbocharged 2.5-liter four-cylinder engine, producing 400 hp and 400 lb/ft of torque. A Mattracks 105M1-A1 rubber track system has been put in place of the wheels, which plays quite nicely with the vehicle’s five-speed ‘dog-engagement’ gearbox, a programmable all-wheel drive system and competition rally dampers.

If that’s not enough to cause mayhem on the snow, the ride includes a custom carbon-fiber sleigh, which it can tug along to carry an extra four passengers. It runs on steel skis and a torsion bar suspension, along with heated leather seats, a marine-grade stereo system, a LED lighting setup and two Viosport POV.1 camera systems (so you can shoot the action both inside and outside the sleigh).

What’s the point other than the fact that it looks insanely fun? The Subaru WRX STI TRAX can carry folks and supplies to snowed-in areas that traditional vehicles and regular ski lifts can never reach. Not that we’ll actually use it for such useful deeds, but it really could. No word on how much such a conversion actually costs, but you can imagine the expense.