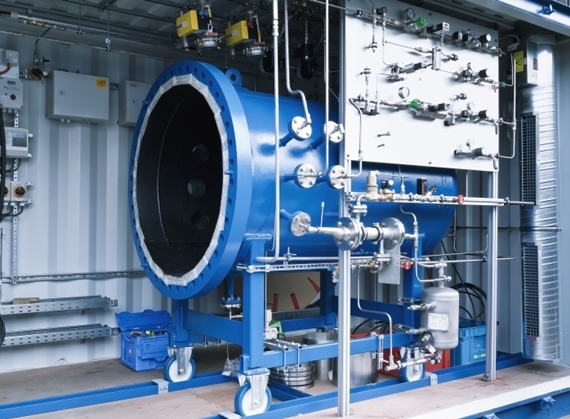 One of the big motivations for exploring alternative forms of energy is the eventual scarcity of hydrocarbon fuels. Simply put, the well will probably dry up at some point. What do we do then? A German company called Sunfire claims to have developed a process that will allow them to manufacture hydrocarbon fuels using just water and carbon dioxide.

The Dresden-based operation recently unveiled a machine that uses its “Power to Liquid” technology, which performs the conversion through a combination of the Fischer-Tropsch process and solid electrolyzer cells. Under this system, water is turned to steam using electricity from renewable sources (e.g. solar, wind, tides), which is then treated to remove oxygen and produce hydrogen gas.

With hydrogen now isolated, Sunfire’s machine will then proceed to harvest carbon dioxide gas from the atmosphere, which it distills into carbon monoxide. The two resultant gases are then synthesized into high-purity fuel using the aforementioned Fischer-Tropsch process, allowing the machine to create very specific hydrocarbon molecules that, when suspended in water, can transform into gasoline and diesel. Any excess heat generated by the machine is put back to produce even more steam, giving the machine an efficiency rate of 70 percent.

At this stage, the machine Sunfire created, paid for in part by Germany’s Federal Ministry of Education and Research, is only for demonstration and feasibility purposes. While it does work, production is limited to a barrel of fuel per day, a far cry from an average oil rig, which can crank out 200 to 300 barrels within the same period of time.

You can learn more about Sunfire from the link below.