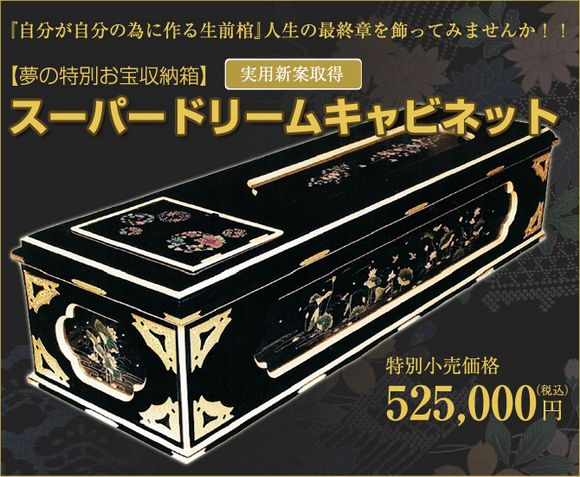 If you’re in Japan, as it turns out, you can have your luxury cabinet and die in it too. At least, that’s what you’ll get if your buy the Super Dream Cabinet, a large decorated chest that’s supposed to be well-suited for burying dead people in too.

While Japan admittedly has weird tastes, this one is likely a marketing stunt from a coffin-maker who has a little too much inventory of expensive units. I mean, if I thought there was going to be an increase in deaths and invested my money in stylishly detailed coffins only to find out the Japanese suddenly developed longer life expectancies, I’ll wrack my head trying to come up with a gimmick to move them too.

Sold by Japanese company Hitugiya, the cabinet-cum-coffin is available in numerous designs, each piece being exquisitely detailed with unmistakably Japanese art across its body. Boasting of the Super Dream’s durability, the company proudly professes the container’s ability to resist the ravages of earthquakes – though they did not mention whether it can survive large falling debris that results from the calamity. Each one is made from pine, with 1,850 × 560 × 440 cm dimensions.

Honestly, though, I think this is a great idea, if you can bear the thought of having a coffin inside your room. Coffin prices have continued to rise over the years – buying one now should be a good investment for something you’ll surely be needing anyway at some point in the future. This way, you’ll even be able to use it well before your demise.

Sold exclusively in Japan, the Super Dream Cabinet is available now for around $5,500.