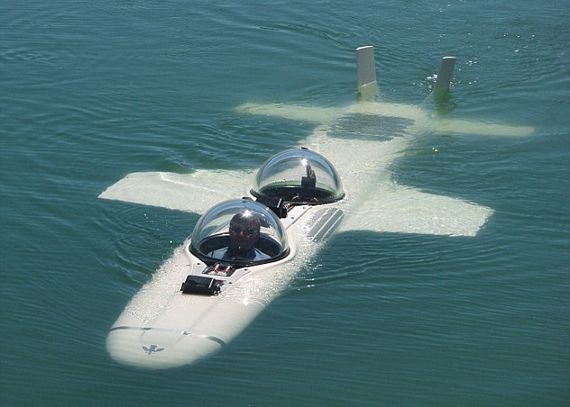 Picture a vehicle called Super Falcon and you’ll likely be invoking visions of a modern aircraft.  At the least, it’s probably a car or a motorcycle that can burn the road so fast it’s almost soaring when it rides.  Oddly enough, it’s neither of those choices.  Instead, the Super Falcon is a modern consumer submersible with wings.

“It is advanced enough to go barrel-rolling with dolphins, spy-hopping with whales or searching for sunken galleons,” according to its inventor, Graham Hawkes of Hawkes Ocean Technologies.  While not quite as advanced as a military submarine, it can fly beneath the waves and allow its passengers to “drive” under the deep sea.

The Super Falcon features a carbon fiber hull, housing two cockpits with dual flight controls.  The actual control mechanism, along with the instrumentation, were based on military aircrafts and should offer a familiar environment to Air Force pilots.  Controls are facilitated using “fly by wire,” which means it operates on electrical signals instead of a mechanical setup (cables and rods).  It can move through a 360-degree axis or a near-silent horizontal path.

A bona fide ocean exploration vehicle, the winged submersible can hit depths of up to 1500 feet, “fly” at speeds of up to six knots and travel a distance of up to 25 nautical miles on its battery charge.  It is capable of descending 200 feet every minute, while returning to the surface at a 400 feet per minute pace.  That definitely sounds more comforting than the pedal-powered submarine we saw some time ago.

Hawkes claims that the Super Falcon is the culmination of four generations of experimental prototypes and is completely safe.  Cabin pressure, for instance, remains at one atmosphere during the whole time you’re inside.  If any type of trouble occurs, the watercraft will rise up to the surface all on its own. It also comes with 24 hours of life support.

Pimped as the “Lear Jet” of the seas, there are currently two Super Falcons in existence, with the first one sold to venture capitalist Tom Perkins in 2008.  Sadly, there are currently no plans to sell commercial versions of the vehicle, although Hawkes will be opening a “flight school” tour for the craft later in the year, where regular folks can experience it first hand.  Price for the planned tour is not yet set, but they’re estimating it to be between £3,300 and £9,900.