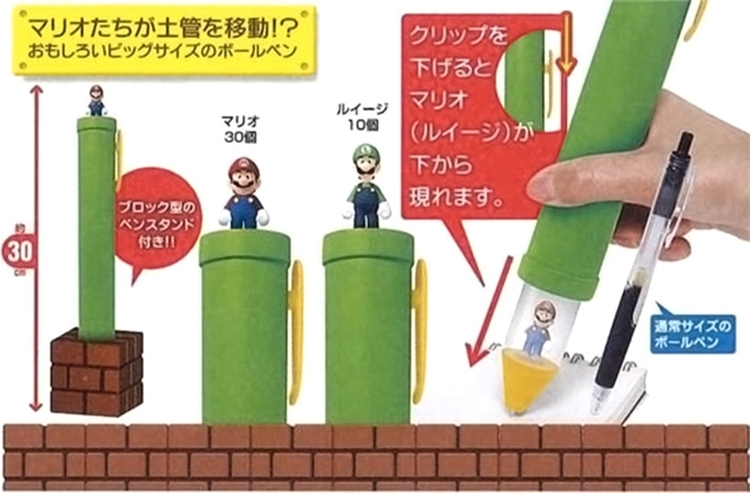 While they’re no longer as ubiquitous as they were decades back, giant novelty pens are still a staple in every gift shop around the world. And while most of them are good for a chuckle or two, this Super Mario Big Ballpoint Pen makes a definite case for your pocket change by being simply impossible to ignore.

Seriously, how can you not pay a second glance to an adorable figure of Mario or Luigi standing on a giant warp pipe atop a brick block? That’s, like, sniper-aimed to trigger nostalgic memories out of anyone who ever played the game at some point in their lives.

Even better, the brick block is actually the pen holder, with the writing instrument clad in the form of the giant green pipe. Take out the Super Mario Big Ballpoint Pen from its stand and the figure on top will automatically drop down on the pipe, with a printed image of the same character popping out at the bottom, right above the pen tip. And, yes, the figure pops back up again after you push the pen back into the holder, so you can have Mario and Luigi pop in and out of the warp pipe over and over until you’ve had your fill of amusement to last you the rest of the day. The whole thing measures over one foot tall.

The Super Mario Big Ballpoint Pen is available for preorder with a June ship date, priced at $19.90. Pair it with this Super Mario Bros Alarm Clock and you’ll probably feel like you’re 10 again.