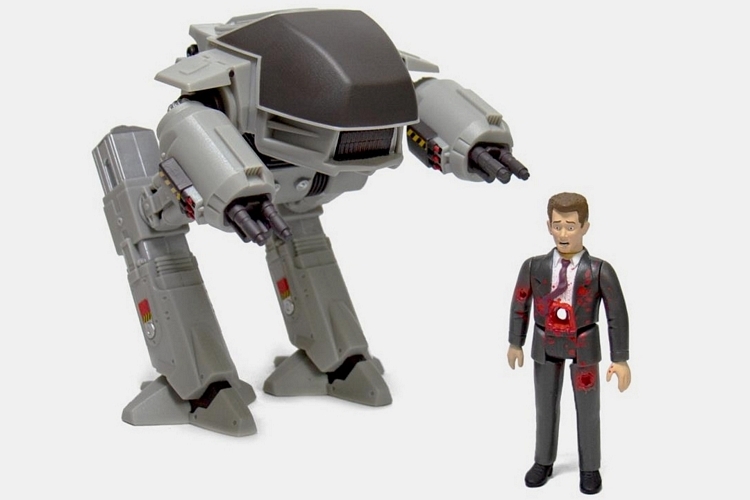 We’re big fans of Super7’s ReAction series, which casts pop culture figures in the form of 3.75-inch articulated action figures. We adore the line. We’re especially excited whenever they add non-human characters, as they take on bigger statures than their usual small form factor characters. Such is the case with the Super7 RoboCop ED-209 & Mr. Kinney ReAction Figure Set, which puts the not-quite-finished future of law enforcement with one of his first unwitting victims.

To the unfamiliar, ED-209 (Enforcement Droid Series 209) was an urban pacification droid that was being pitched to police forces and military units alike. Unlike RoboCop who was a cyborg, this was a total robot, which needed to be programmed correctly, in order to do its intended functions. During a demonstration of an unfinished version of the robot, Mr. Kinney was tasked with acting as an armed assailant, which the robot then proceeded to arrest. While Kinney put the gun down as the ED-209 commanded, the robot didn’t recognize this, causing it to treat the hapless executive as a hostile subject. The result is a dead dude in a suit with a bullet-ridden body. It was quite the cool scene. 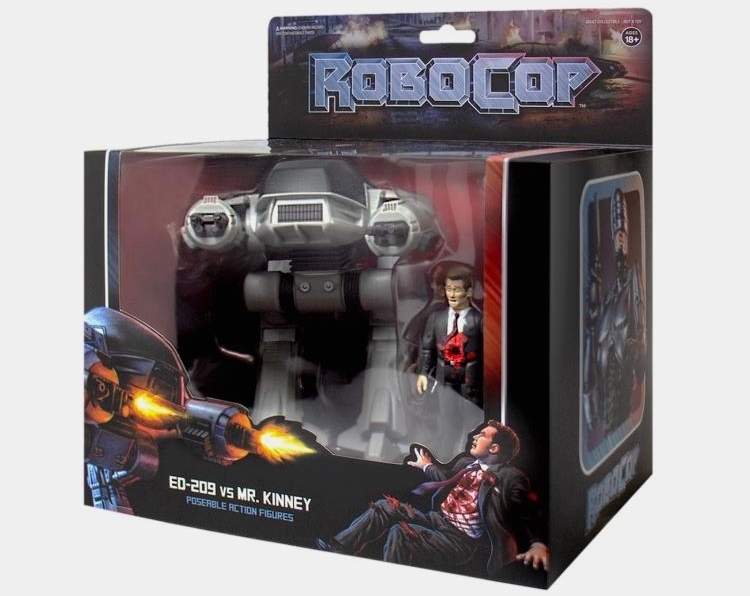 The Super7 RoboCop ED-209 and Mr. Kinney ReAction Figure Set comes with two figures: a 3.75-inch Mr. Kinney and a 6-inch ED-209. The 3.75-inch Kinney is similar to the standard ReAction figures, bringing points of articulation in the shoulders, neck, and legs, allowing it some limited movement. This isn’t Kinney at the start of the scene, either, but after he already got blasted by the robot a few times, so there’s a massive hole in his belly, along with a few bullet holes around his body, making it quite the unique action figure. And yes, it gets worse for the character in the movie, as the robot proceeds to unload an armory’s worth of ammunition on his already lifeless body.

The ED-209 droid, on the other hand, gets four points of articulation, allowing it to walk towards a suspect and move its blaster arms to aim right at them. It looks badass, with a decent amount of detail that recreates the likeness of the droids from the movie. There are no light-up parts, sound effects, or functional ammunition whatsoever, so it’s just one big hunk of plastic with a few moving parts. Still, at half a foot tall, this thing can terrorize any of your 3.75-inch Super7 ReAction figures, making it an absolutely horrifying beast to add to any collection. Sure, it sucks that it can’t actually shoot any of your action figures, but you can always make it trample them like a normal robot probably will. That sounds just as fun.

The Super7 RoboCop ED-209 and Mr. Kinney ReAction Figure Set should be a great addition to the already existing line of RoboCop ReAction figures, making this a must-cop for any fan of the 80s franchise. It’s now available for preorder with a scheduled second quarter ship date, priced at $34.99.