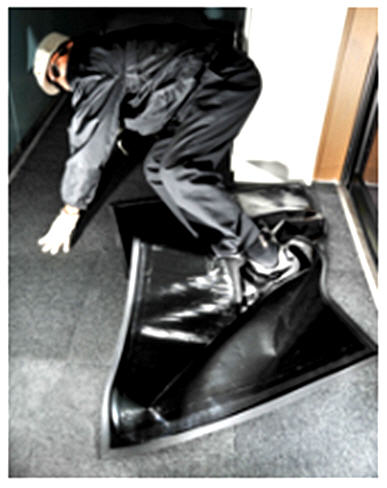 I’ve long been a big fan of the sticky rat-trapping mat, which catches smaller rodents when they attempt to walk past it, only to find themselves glued on the sticky surface. This Anti-Burglar Mat takes the same concept, balloons up the size of the sheet and applies it to potential robbers.

Developed by rat trap-maker Shimada, the theft-deterrent is actually an extra large adhesive doormat. Measuring 1 x 1.5 meters, the entire upturned side is coated with a layer of sticky material, allowing it to latch on to unwelcome intruders.

The way the rat trap variation works is by placing it right in areas where vermin are expected to frequently pass thru. As such, you’re supposed to arrange this sneaky thief variation around the areas that are the most prone to break-ins, whether that be your front door, your kitchen window or the attic.  Simply leave it by the spot and let it do the job.

According to Shimada, the idea came from the Japanese police, who are looking for new ways to help homeowners deter home invasions. While the mat isn’t meant to trap burglars permanently, it is hoped that the “adhesive doormat” will catch them by surprise, cause them to panic and hurry out of the house.

I can totally see this thing working as a short-term solution. Once burglars get wind of the tactic, though, they are less prone to panic and are more likely to just proceed robbing the house as planned. Still, how cool would it be to catch home burglars like you’re collecting rats? The mats are said to be scheduled for release in Japan, sometime in the Fall.

Expect this to be used for pulling practical jokes, rather than catching any real criminals, though.