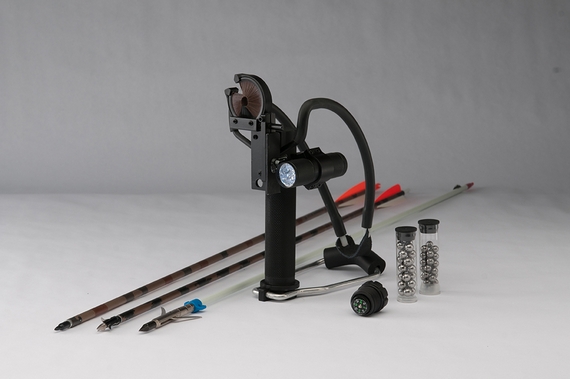 I think I’ve found my zombie apocalypse weapon of choice. While I’ve always been partial to axes and swords, I have a feeling this Survival Slingshot Archer will prove more efficient for thriving in a post-apocalypse landscape.

Like regular slingshots, it can hurl balls at high speeds, allowing you to hunt birds and other small game for food. Unlike them, it has been modified to also shoot arrows, allowing you to Katniss your way out of any predicament without an actual bow in tow.

The Survival Slingshot Archer uses a mounted Trophy Ridge Whisker Biscuit to aid with arrow accuracy, which can fold out of the way if you’re using the weapon to shoot slingshot ammo instead. It comes with stock bands that boast 25 pounds of pull strength, allowing it to shoot regular arrows with ease, making for a perfect companion when hunting boars, bowing fish, or shooting a zombie who stumbled its way into your camp right between the eyes. It comes with mounting points along the body where you can attach optional accessories like a tactical flashlight, a compass, or a waterproof storage box.

Granted, a slingshot is probably nowhere near as intimidating nor as efficient as Daryl Dixon’s crossbow for letting those arrows fly into the brains of zombie hostiles, but it sure as heck is more portable, apart from the allowing you to use random stones when you run out of ammo. The Survival Slingshot Archer is available now, priced at $139.95. Arrows not included, by the way, so better get a separate set for that.