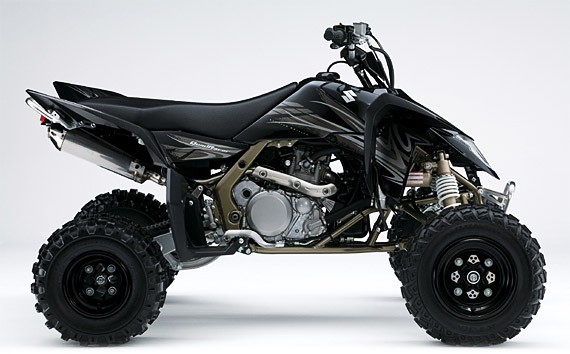 Why settle for a random sporty quad bike when you can get your paws on a full-fledged ATV racing champion?  The 2009 Suzuki QuadRacer R450 Limited Edition, which recently won the AMA/ATVA National MX Championships, should prove a more powerful choice, giving you a motocross-tested off-roader built entirely for speed.

Design to conquer the toughest tracks without losing an inch in performance, the race-ready quad brandishes awesome looks to match its wanton power.  Suzuki pegs it as “indisputably, the hottest four-wheeler on the track” and it’s tough to argue.

Forget taking a stock ATV and tacking on a bunch of aftermarket parts.  The Suzuki QuadRacer R450 Limited Edition is geared to roll into difficult tracks right out of the showroom floor.  With a low, wide stance and stunning styling, it’s the surest way to stand out from the ATV pack.  Prices start at $8,199.