Flying drones is definitely fun. You know what’s more fun, though? Actually flying yourself. But when all you have access to is a garage full of drone parts, what do you do, then? Well, this guy built the Swarm, a 54-rotor flying machine made using consumer drone parts.

That’s right, someone finally decided to combine dozens of tiny drone rotors to create a manned aircraft capable of carrying a grown man. We’re not sure how safe it is, how stable it is, or how bad of an accident you can get riding this thing. What we do know is, it’s absolutely glorious in every single way. 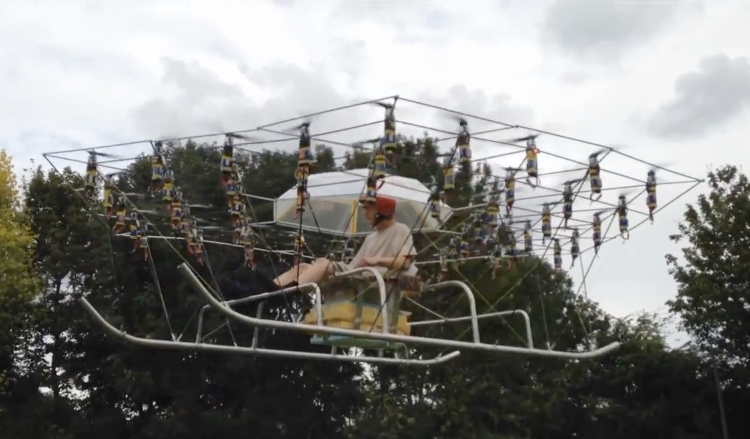 The Swarm consists of a metal frame, affixed to what looks like a lawn chair and an umbrella serving as the roof. Seriously. Surrounding the umbrella roof is an assembly of 54 counter-rotation propellers, running on six grouped control channels with Hobbyking stabilization. It’s got some serious lift, too, with a claimed maximum weight of 320+ pounds, so even superheavyweights can lift a few feet off the ground on this thing. We’re not sure how much the guy doing the flight testing weighs, but it looks like he managed to get up to around 12 feet (maybe more). Steering, of course, seems another matter entirely, as it totally looks like he’s at the mercy of whichever direction the wind is blowing. It can run for around 10 minutes on a single charge.

We have no other details on the guy behind Swarm, but you can subscribe to his YouTube channel if you want to be on the loop for further videos.