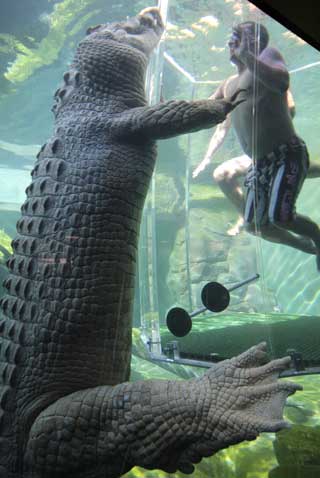 For the serious adrenaline junkie, or if you think you’ve seen and done it all, Australia’s Crocosaurus Cove might just be the perfect destination for your next action packed  vacation.
Newly opened in Darwin, the newest animal park in Australia is just a few months old but it is already attracting world wide attention.
Apart from the impressive collection of reptiles, which claims to include the largest collection of poisonous snakes in the world, it is the scarily named Cage of Death attraction that is causing all the buzz. (Not that hundreds of venomous creepies are anything to scoff at.)
So what on earth is the Cage of Death you ask? Certainly not an attraction for the faint of heart, that is for certain. Basically, paying customers are invited to step into a nine foot high clear acrylic cage. This is then lowered into an enclosed pool, which just happens to be the home of a certain gentleman named Choppa, an eighteen foot seawater crocodile. Choppa will happily swim around the lucky patrons in their cage, who are separated from his attentions by plastic that is just 1.5” thick. He must be a tame crocodile right? Not quite. Choppa is missing both of his front feet as a result of violent fights with other crocs when he still lived in the wild, and he still apparently has a lot of fight left in him. He will press his grinning face right up against the cage for you, just so you can get a better look at his charming features.

Customers are allowed fifteen minutes underwater with their scaly new friend, but one has to wonder how many people have lasted that long. Plastic or no plastic, you are still face to face with one of the most ferocious beasts on the planet. Who let’s face it, probably spends his entire day fanaticizing about having a juicy human or two for a mid day snack.
For those not quite ready for the Cage of Death, Crocosaurus Cove has another option available for the reptile curious.  Next to one of the other seven crocodile enclosures, the park has constructed a “swimming area” adjacent to a large viewing window, so park goers can get a sense of “swimming with the crocs” without actually having to interact with them Steve Irwin style.
On a related celebrity note, Crocosaurus Cove is also home to Burt, who had a starring role in the Eighties classic “Crocodile Dundee”.