Switch, A Salt And Pepper Shaker That Lets You “Turn On” The Flavor 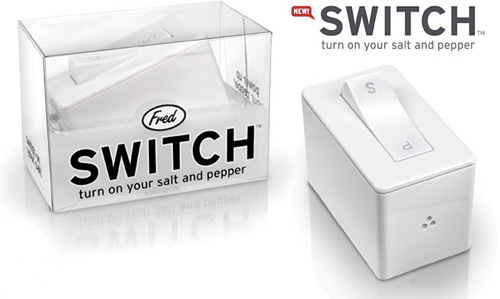 We have no idea about the fascination with salt and pepper shakers, but people sure do love designing around them.  Here’s a new one that’s decidedly quirky: the Switch, a cute little shaker that looks like a real two-way switch for turning on the lights.

Dreamed up by nerdy home accessories purveyor, Fred & Friends, the contraption really looks like an honest-to-goodness switch box.  I mean, you can set it up over a couple of wires that do nothing and people will be wondering what it’s supposed to be turning on.

The Switch is a two-in-one shaker with separate compartments for holding the salt and pepper, respectively (or some other ground spice you may want to put in).  Put the switch on “P” and it activates the pepper dispenser; turn it to “S” and it draws from the salt compartment.  Both spices exit from the same three holes on top.

While you probably don’t need another salt and pepper shaker, necessity isn’t the reason you buy things like this.  Instead, it’s pure unmitigated novelty — and this kitchen accessory brings that in spades.  It’s the kind of impulse aww..shucks purchase that makes you want to kill yourself.

No word on pricing yet, but the Switch will be part of Fred & Friends’ 2011 catalog.  Expect it soon.