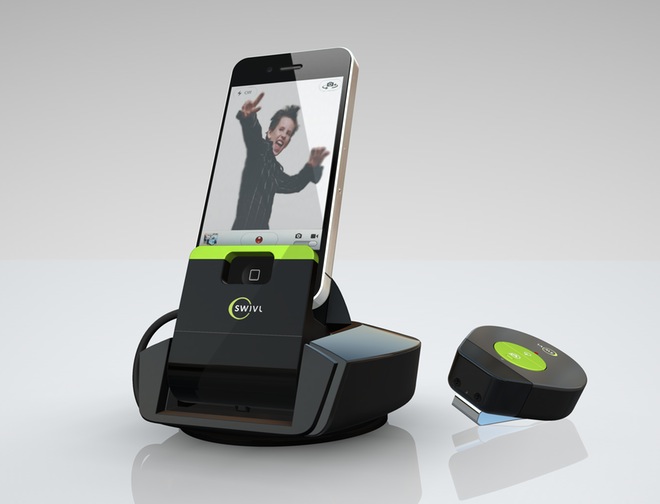 Ever wished you can broadcast on Ustream without having to move your webcam around every time you want show something in the room?   Get a cameraman.  If you can’t afford an employee for your web show yet, here’s an electronic solution: the Swivl Camera Stand.

Compatible with any camera device that has a tripod mount, the contraption can work with anything from your iPhone to your pocket cam to your 3D point and shoot.  Instead of just propping up your motion capture gadget of choice, though, it will follow you around the room, turning the camera so you’re always in the center of the shot.

The Swivl Camera Stand is a motorized accessory that turns its base both left and right to keep you constantly in the frame.  Each stand pairs with a marker that you’ll have to either carry in hand or clip to a part of your clothing.  The sensors on the base will actually follow the marker, so you can make the camera follow your dog or your RC truck or your pet Leprechaun around the room if you feel like it.

While this is obviously handy for video chats and amateur webcasts, makers Satarii actually have bigger plans for the motorized camera stand.  According to the company, they’re looking to build apps that both improve real-time video capture and extend its uses for deployment in other fields.  In fact, there are already extras if you use it with an iPhone, such as being able to start and stop video capture using the marker.

Funded earlier this year through Indiegogo, the Swivl Camera Stand is set for release next year, priced at $160.