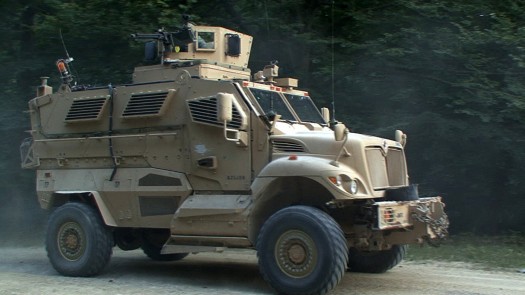 Airbags make awesome protection inside car cabins.  Who knew they could help protect vehicles from the outside, too?  That’s what the Tactical RPG Airbag Protection (TRAP) system does, adding an extra layer of armor using airbags to keep enemy warheads at bay.

Currently a prototype under development by Textron, the system will involve both airbags and a radar that can detect incoming RPGs.  Once it recognizes a threat, armored airbags will be deployed on the side of the vehicle to both catch the explosives and keep them from exploding.

Countermeasures against RPGs have been among the most sought-after military solutions, as armoring up simply hasn’t kept vehicles safe from their onslaught.  One hit and a lone warhead can immediately take a Humvee or MRAP vehicle without having to do much else.

The TRAP system’s most impressive ability is being able to render the RPGs inert, an act that removes both exploding shrapnel and blast danger that current anti-RPG systems aren’t able to avoid.  Not to mention that it should prove considerably lighter than the current favored solution of using roll cages to keep blasts within a safer distance.

So far, Textron has been running successful tests using Humvees.  According to the company, there’s no reason why the same technology can’t be fitted into other military vehicles, such as MRAPs and tanks.  Yep, airbags for defense against RPGs – who would have thought?