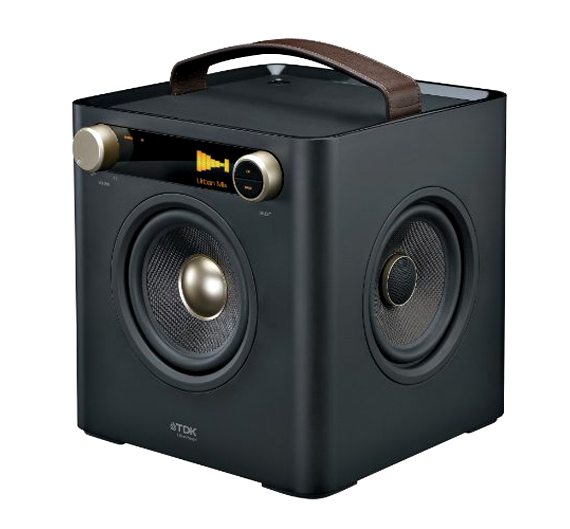 As awesome as the reimagined TDK boomboxes are, modern times deserve an even more compact  speaker solution.  Don’t start me on those crappy desktop units either — we’re thinking something more like this TDK Life on Record Sound Cube.

While this isn’t likely to be your speaker system of choice for a crowded outdoor party, it should do more than its share of spreading awesome tunes inside a more confined space.  Measuring an even 9.8 inches on all sides,  the form factor will make it easier to move around compared to traditional boombox systems, too.

The TDK Life on Record Sound Cube is a portable stereo speaker system that pumps out 20-watts RMS of music on all four sides.  While it looks like there are four speakers, there are actually only two 5.25-inch coaxial drivers  — the other two simulate the sound of a subwoofer and a crossover circuit in a neat effect.

Two rotary dials flanking an equalizer display allow you to control the music source, tone and volume.  A variety of inputs sit on the body, including USB, 3.5mm and several auxiliary ports, allowing you to plug in a mic or a guitar for jamming with your favorite songs.