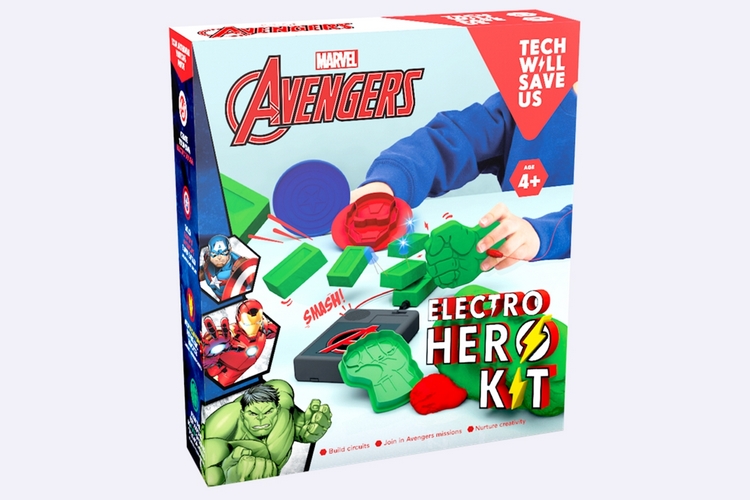 Yes, having kids make video games and build toy robots is a great way to get them into science and technology. Problem is, coding and robotics just isn’t fun for every kid. You know what’s fun for every kid? Roleplaying and storytelling. That’s exactly what Tech Will Save Us brings with their Marvel Electro Hero Kit.

To the unfamiliar, the outfit creates toys that revolve around conductive dough, allowing kids to easily build objects that they can power without messing with any types of circuits. They do the same thing here, of course, except with a twist involving Marvel’s rich roster of superhero characters.

The Marvel Electro Hero Kit revolves around three Avengers: Captain America, Iron Man, and the Hulk. The story component, available from the companion app, will prompt kids to build various objects designed to help each superhero achieve a variety of goals. Basically, your kids are supposed to roleplay as tech support of sorts for the Avengers, as they go on their crime fighting missions, battling the worst supervillains the Marvel universe can bring their way. All objects that kids are asked to build are integrated into the story, which should help make the writing code or building a robot a bit more exciting compared to just being told to do them with nothing at stake.

The set comes with a generous supply of conductive though, along with a variety of molds that should help make building likenesses of various items (e.g. Iron Man’s arc reactor or Hulk’s fist) just a little easier. There’s also an assortment of electronic parts, such as LEDs, speakers, and batteries, which they will need to build the different projects required in the game.

According to Tech Will Save Us, the Marvel Electro Hero Kit doesn’t end with the missions available in the app during launch. Instead, they’re already planning future expansions with more missions and additional content, so this could prove a great STEM investment for kids who enjoy superhero narratives and involving themselves in them.