This Ted Plush Teddy Bear Will Talk Dirty To You 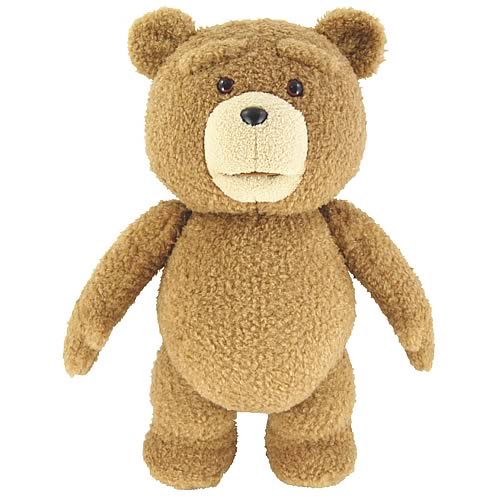 I haven’t watched the Ted movie yet, but I did see the trailer and I have been on the lookout for a real-life version of that animated teddy bear.  And here it is: the Ted Talking Plush.

Available in 8-inch, 16-inch and 24-inch versions, you can buy a small one for your toddler, a mid-sized one for the bigger kid and a large one for you.  And, yes, you’ll probably like one, too.  In particular, you’d like the 24-inch R-rated version, which spouts off Ted’s dirty lines from the movie, such as, “Well you never should’ve trusted me, I’m on drugs!”

The Clean version of the Ted Talking Plush can speak 12 different phrases from the movie.  While the lines are meant to be funny, I have a feeling you’ll need to be at least a teen to get most of the jokes, especially with lines like “You know what I’d like to do to her: something I call the dirty Fozzie” and “I didn’t know you had a baby.  Is it alive?” included in the mix.  The R-rated version only comes with five lines, though, since most of them are long tirades filled with expletives and dirty ideas.

Each doll faithfully recreates the appearance of the crazy-talking, innocent-looking bear from the movie.  Unlike the CG-animated movie version, though, the doll is inanimate, although the 16-inch is listed as being able to move its mouth (not the 24-inch, however).