Teddy Bear Guns – Now Even A Pacifist Can Pack Heat 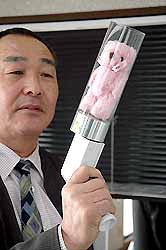 There is apparently a tradition at Japanese weddings in which small pink teddy bears are thrown at the bride and groom instead of confetti or rice.
The Japanese, being the guys who brought the world Godzilla and Mothra , decided that was well ..lame. What on earth can be fun about throwing a little pink stuffed toy? Better idea, fire them out of a gun. Now that’s more like it (ask any seven year old boy.)

Unfortunately for the aforementioned boys the teddies once fired , albeit at high velocity, have tiny teddy parachutes strapped to their backs to ensure they land safely. After all, a teddy bear massacre just might put a damper on any well planned nuptial ceremony (unless it’s one of those very sensible ceremonies from which small children are barred, in which case it could be a whole lot of fun.)

But why stop at weddings? What better way to diffuse a tense police stand off than for the boys in blue to shoot off a couple of rounds of pink teddies? Or in this day and age when everyone is up in arms about video game violence have Nico from Grand Theft Auto take on his enemies with a teddy pistol instead of that boring old AK-47? The world would be such a better place. Perhaps even 007 could give it a try, let’s face it, Bond movies have always been slightly camp anyway.   And it would of course be the perfect Christmas Gift for the seven year old boy, provided he does not have a little sister with a large collection of small stuffed toys. In that scenario the emotional scars could perhaps  be devastating.