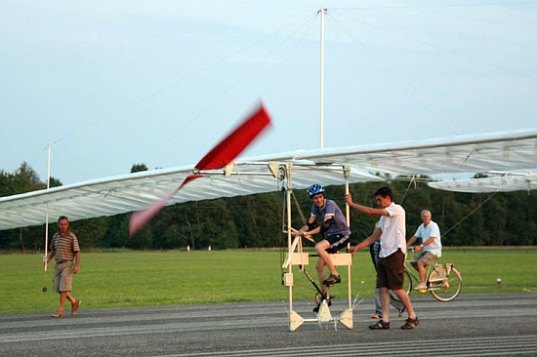 Whoever cautioned about reinventing the wheel probably never tried it.  Nineteen-year old Jesse van Kuijk did something others have done before him – fly using a pedal-powered aircraft he built himself – but it sure seemed no less thrilling.

The adventurous young man, who studied flight by researching other human-powered planes (such as the Mufli, the Gossamer Condor and the Gossamer Albatross), took his labor of love to a small airport 10 minutes from their home, in a provincial Dutch town called Budel.  The attempt only managed to net a modest five feet of elevation and a 35 feet distance, as the bike chain running the rotor eventually slipped off its cog.  Yet, the short but mildly successful run was undoubtedly worth the three years he spent fashioning the ride.

How DIY is this thing?  The entire creation was built using lightweight balsa wood, rip-resistant foil and polyurethane wrap, along with the necessary mechanical components.   It features a wingspan of 85 feet and a 10-foot long red propeller, powered by a bike chain attached to the aircraft’s pedals.  Yep, that was it. 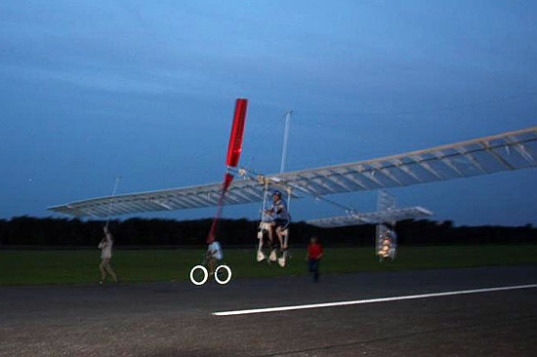 Jesse wore a bike helmet and elbow pads during the attempted flight, as if that was supposed to save him if the thing really took off to where only the birds roam.   He will likely be more prepared in the future, as he plans to pursue further development on the aircraft.

Let’s see…balsa wood, plastic wrap and foil, plus lots of Physics lessons, plus lots of time otherwise spent drinking and playing videogames, equals awesome creation.  So, what have you been up to the last three years?