Wait, So Telekinesis Isn’t Real? – Must Watch Video Of The Day 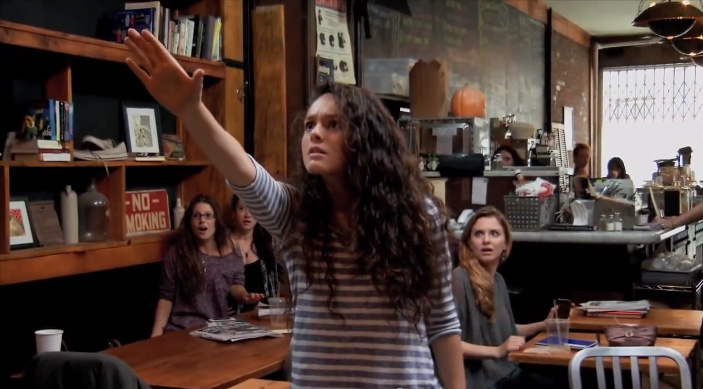 Deep down, we all want to believe in magic.  That’s why we stare in awe every time we see something magical happening in front of us.  Well, that or we freak out similar to how many onlookers did while watching this staged publicity stunt of a girl with telekinetic powers unleashing her wrath inside a coffee shop.

A viral video stunt promoting the upcoming Chloe-Grace Moretz remake of Carrie, it starts out with an otherwise familiar coffee shop scene, where some clumsy dude knocks over another patron’s table and an argument ensues.  Instead of simply degrading into a loud and annoying shouting match (as coffee house arguments normally do), things take a surprising twist when the girl reveals terrifying telekinetic powers as she bursts into anger.

The entire scene, of course, is nothing but a staged prank designed to freak out unwitting customers standing by the counter.  Every single one of the sitting patrons and the coffee shop workers is in on the joke, so they pretend to act all shocked and surprised at the ensuing events.  To create the telekinetic effects, they use quite the elaborate setup — fake walls, hidden pulleys that levitate the customer, spring-loaded bookshelves, remote control tables and more.

Customer reactions, of course, play a big part in the video, which showed folks either freaking out mildly or backing off in utter shock.   Well played, guys, well played.  Now, if only the actual movie can be this good, we’ll be satisfied.