Tentacle Mustache Disguises You As A Burt Reynolds Cthulhu 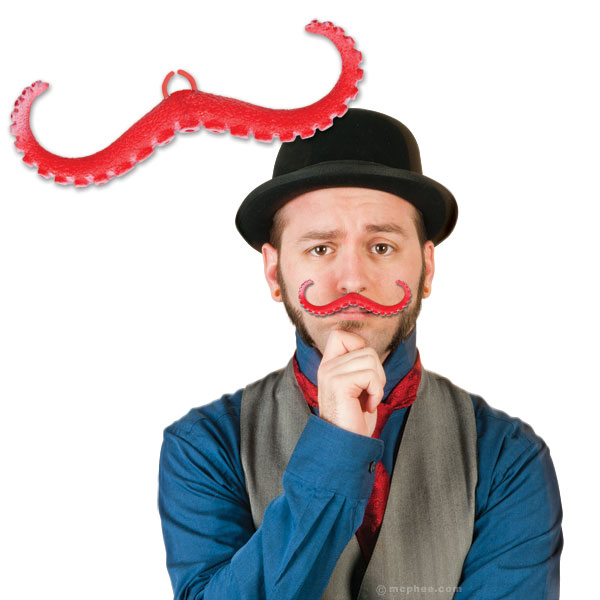 Ages ago, before homo sapiens ruled the earth, our cave-dwelling human ancestors snorted hallucinogenic baby octopuses in order to get high.  And some of those baby octopuses matured inside their skulls, eventually growing long tentacles that came out of their noses.  You can look like those beloved ancestors with the Tentacle Mustache.

A wonderful addition to your disguise wardrobe, this upper lip accessory clips under your nose, giving you facial hair clad as a cephalopod’s tentacles.   That way, people will look at you and marvel at the octopus living inside your nose:  “How the heck did it get in there?”  Voodoo magic, you tell ’em.

The Tentacle Mustache is made from soft vinyl, so you can make it squiggle a tad if you’re up to the task.  Granted, a single moustache isn’t likely to help you camouflage yourself as Kraken from Pirates of the Carribean, but it’s a good first step.  Plus, tentacles over your upper lip is a guaranteed way to conceal your identity, so you can totally use it the next time you’re robbing a bank.

According to the product page, the accessory should make you look like “a cross between a sophisticated gentleman and a squid.”  We suggest ordering for one, since all the ladies love them dapper calamari men (just kidding — nobody does).

Whether you’re trying to look like Kraken, Chthulhu or those tentacle-faced aliens from District 9, the Tentacle Mustache should make a nice addition to your outfit.  McPhee has it listed at $4.02 a pop, but ship date won’t be until August.