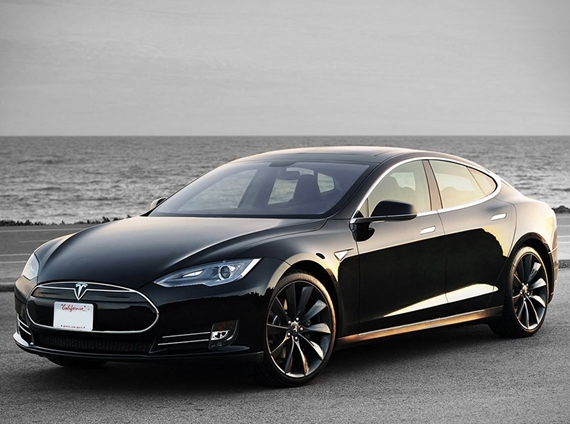 Contrary to what some had hoped, Tesla’s new car isn’t a next-generation model.  Instead, it’s a souped-up version of the current Model S.  Called the Tesla Model S P85D, the new vehicle is designed to match, if not surpass, what the current crop of luxury cars can do.

It comes with a new 691-horsepower dual-motor setup: the same 470-horsepower from the standard P85 in the back and a smaller 221-horsepower unit out in front.  Combined, they manage to put out 687 pound-feet of torque, which translates to a 0 to 60 of 3.2 seconds, a full second faster than the single-motor P85.  Top speed is 155 mph.

Beyond the power, the Tesla Model S P85D will also feature a suite of Tesla autopilot autonomous driving technologies.  The system consists of a forward-looking long-range radar, a camera with built-in image recognition (it can read traffic signs, identify other cars, and recognize pedestrians), and a total of 12 sensors that see 16 feet in every direction, all of which integrates into the vehicle’s GPS and navigation system.  Simply put, the car is capable of operating in a semi-autonomous manner, performing things like lane changes (as soon as you press the turn signal stalk), parking, and cruise control all on its own (kinda like a half-done version of a self-driving car).  Tesla Motors CEO Elon Musk claims that the P85D “will have the most sophisticated driver assistant functions of any vehicle on the road.”