In Case You Run Into Aliens, Let The Arecibo Scarf Break The Ice 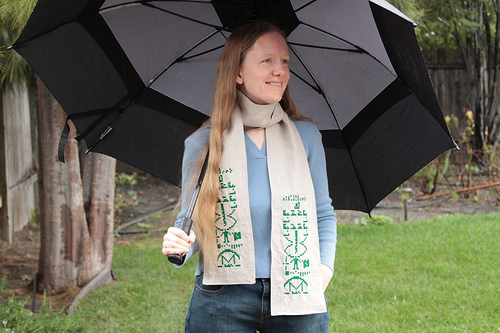 Running into Aliens could be cool experience or scary too.  You never know what they’re gonna do once you actually stand across from one, so your best chance at fostering good will is to communicate first.  That’s why the Arecibo Scarf will make an excellent icebreaker, allowing you to make first contact with a benign message intended for extra-terrestrial visitors.  Of course, it’s best to cross your fingers and hope they understand what the drawings say, lest end up probed in that part of your body where the sun doesn’t shine.  Yikes.

The Arecibo is one of SETI’s most famous messages.  According to Evil Mad Scientist, it loosely translates to “Hi! We’re intelligent! We’re made of meat! Here’s where we live!”  Embroiders supposedly love similar pixel-based patterns because it lends itself well to stitching on various items.  We don’t know if aliens love them too, because even as an Earthling, I don’t exactly read the same meaning from that message.  In fact, when I decipher the code, it comes out as “We will kill you, put you in a cage and usurp all your resources.”  But that’s just me. 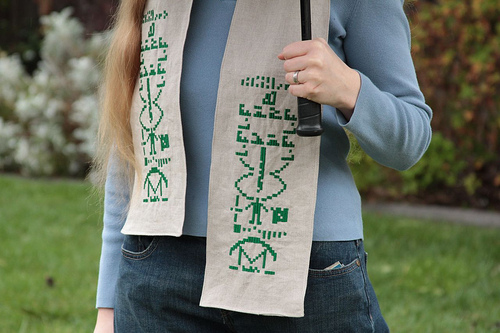 A 14 x 76 inch piece of linen was turned into the resulting edge-stitched scarf, which was sewn together on the back and at the ends, then turned inside out.  The embroidered pixels measured 3.5 x 11.5 inches and were implemented as satin-stitched columns in a single color, to more tightly reflect the SETI original.

Want to embroider your own Arecibo Message?  They’ve made the pattern available as DST and PES files for those with machines that can read them, as well as a PDF for those who do their stitching old-school style.   Whatever garment you add the design to, it should make an excellent gift for any friend who like to spend afternoons watching UFO Hunters and X-Files on DVD.  For those who’ve already been probed, though, my sincere sympathies.  That must have hurt like hell.