Shoot To Switch: The BANG! Lamp 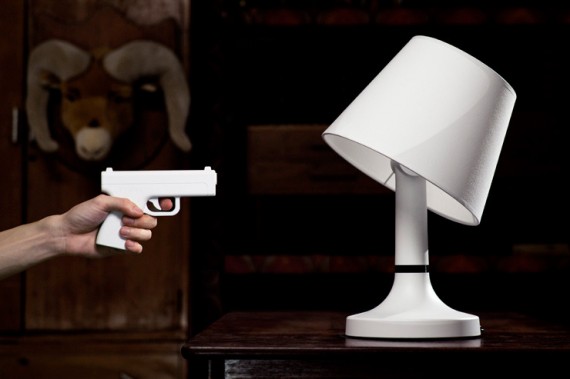 Remote controls make everything better — even pillows.  But what makes remote controls better?  Turns out they become more awesome when the remote comes in the shape of a gun.  Proof: the Bang! Lamp.

Made by Bitplay, it’s a novelty desk lamp that you turn on and off using a pistol-shaped remote control.  Aim the gun, pull the trigger and the lamp turns on; do it again and it switches off.  Basically, it’s like a cooler, more awesome version of a clapper, letting you play shootout in the living room instead of just slapping your hands together.

The BANG! Lamp doesn’t just switch on and off when you shoot at it — the shade tilts to the other side like it’s been hit by an invisible projectile, so the entire shooting sequence feels authentic.  You can fire the gun from a distance as far back as 49 feet, so long as the nozzle’s aimed straight at the lamp.  The styling and design are pretty conventional, so it looks just like any regular desk lighting furniture, too.  Except, of course, that the shade’s knocked over to the side, which is kind of like how you wear your snapbacks, so it’s still pretty normal.

We’re not exactly sure what’s the best place to buy the Bang! Lamp, but they do list a bunch of distributors across numerous countries right on the website.  Price is $299.  Now, if only there’s a way to make the gun remote do pew-pew sounds every time you shoot, it’s all we’ll need to make life complete.