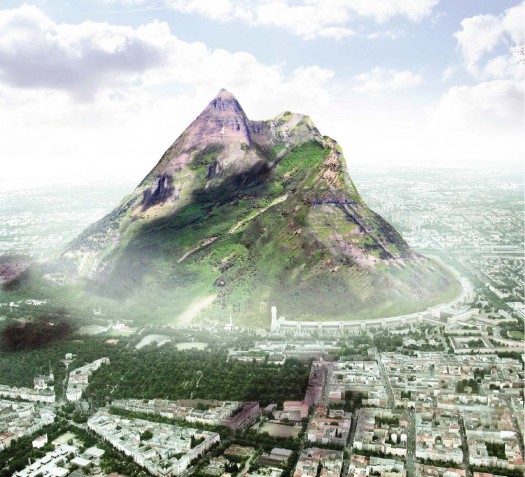 No real mountain where you think one should be?  Let’s go build it.  That’s what German architect Jakob Tigges probably thought when he came up with the idea for “The Berg,” a proposed artificial mountain that’s set to be the largest in the world.

The pinnacle of landscape architecture or a ridiculously insane vision that can upset the local geography?  Both claims sound valid.  Regardless of your own leanings, there’s no denying how awesome it would be to erect a real mountain and fill it with a teeming ecosystem, rather than slapping up another towering skyscraper.

Current plans have The Berg rising on the spot of the now-defunct Tempelhof Airport, a massive pre-WWII structure that sits in the middle of the German capital, Berlin.  When built, it will look like a real mountain at 1,000 meters high, complete with fully-planned slopes, trails and all the necessary habitat to sustain wildlife.

How will they build it?  I have no idea.  I imagine building a functional mountain won’t require the same kinds of materials as your run-of-the-mill, sky-high office tower.  Seriously, it sounds insane enough that  it may require slave labor (you know, the same one that built the pyramids and the Great Wall) to pull it off.

Can you imagine the amount of tourist attention the Berg will end up getting, though?