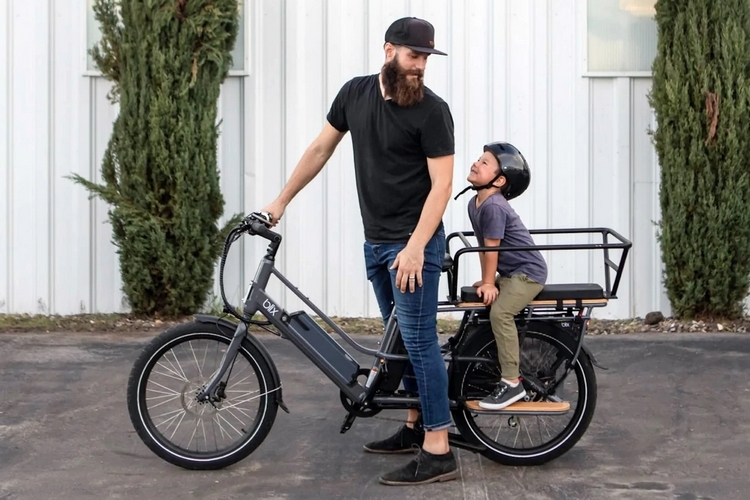 Commuting on an ebike is great, but as soon as you need to transport furniture, renovation supplies, or even just a few weeks’ stock of groceries, it turns into a much less viable option. Time to take the car out of the garage for that.

If you still want to find further ways to minimize your reliance on cars, though, an electric cargo bike for transporting heavy items is a sensible way to go.  Like regular electric bicycles, it gets you around with minimal physical exertion, all while allowing you to transport reasonably heavy cargo. Sure, it still won’t let you haul everything you can with a car or a truck (that two-door fridge probably won’t even fit), but it should be able to handle smaller appliances, flat pack furniture, and containers upon containers of various supplies easily enough.

These are the best cargo ebikes to help you transport heavy loads with zero emissions and minimal footprint. 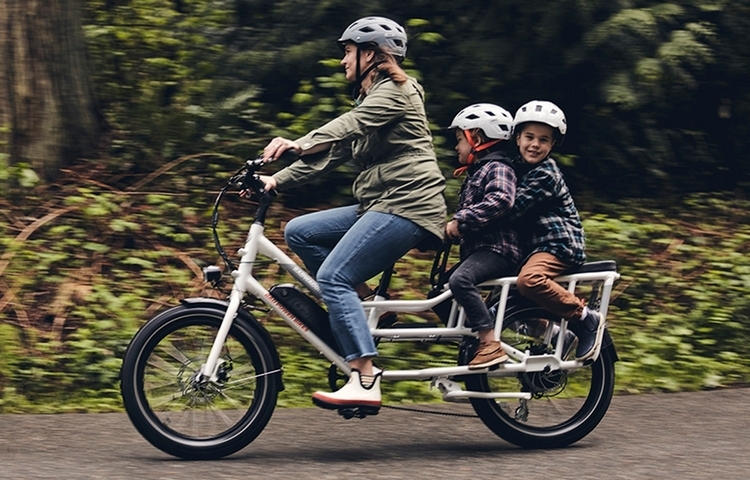 If you’re simply looking for a way to carry groceries, small appliances, or a box of supplies at a time, Rad Power Bikes has a cargo ebike designed specifically for that. And it’s long been one of the more popular options in the category, with its combination of affordable price, payload capacity, and apartment-friendly form factor. It runs on a 750W motor with a battery rated for up to 45 miles between charges, all while hitting top speeds of 20 mph, which is available both from pedal assistance or via the throttle. The maximum payload is 350 pounds, which includes the driver, so you can still load up a hundred or so pounds’ worth of cargo in the rear rack, depending on how much you weigh. While we love most everything about it, including the custom 22 x 3 inch tires, those tires can be a pain to replace, since it’s an uncommon size that you just can’t just find anywhere, so make sure you keep replacements on hand, just in case it’s needed. 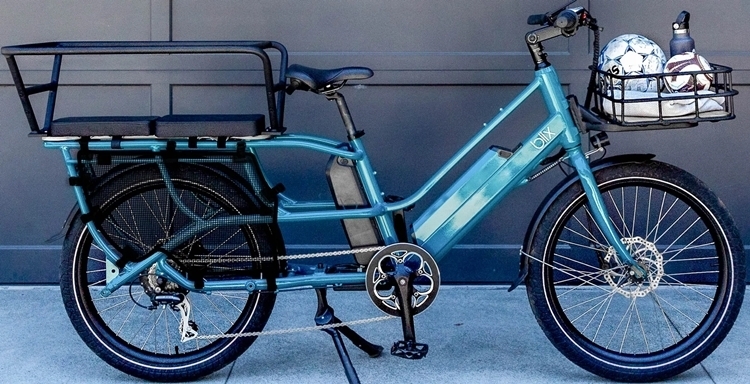 This electric cargo bike uses a rear rack to let you load any cargo you need, while a selection of modular accessories allow you to outfit that storage area in any number of ways. It even has an option for a front rack, in case you want maximum cargo capabilities, although you will, of course, have to spend extra for anything on top of the rear cargo rack. The bike can support total payloads of up to 400 pounds, including the rider.

The design is very similar to the RadWagon 4, albeit with the battery mounted behind the seatpost instead of the downtube. It also supports a dual battery setup, which is what we’d recommend you get, since it gives the darn thing a whopping 80 miles of range, which will really come in handy when you’re transporting heavy loads that can put a strain on your charge. Performance is pretty admirable, with the powerful 750W motor, excellent stability, and hydraulic disc brakes. You also get a seven-speed gear shifter that really comes in handy when maneuvering through steep hills, a throttle for putting all the power of that motor on tap, and puncture resistant tires. 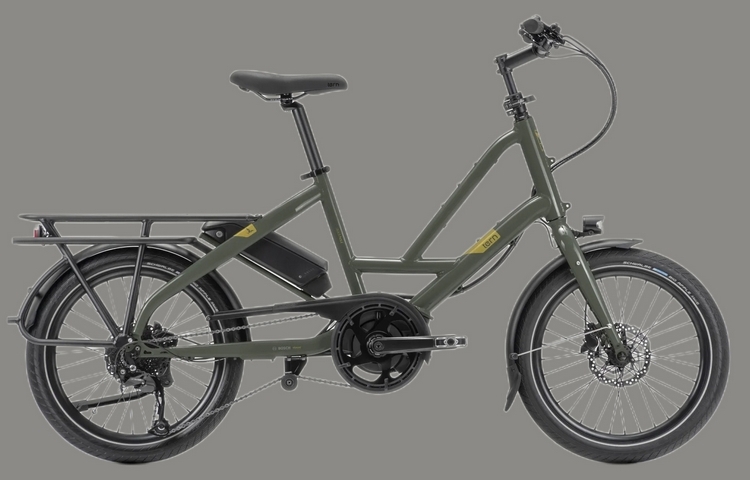 If you want the most compact electric cargo bike you can get, this Tern model is probably the best you’re going to find. The whole thing stretches just less than six feet in length, making it around the size of a bigger road bike, all while offering plenty of cargo room in the rear rack. It’s collapsible, allowing it to fold in a compact size that should make it easy to bring inside buildings and trains, although it is still pretty big compared to standard folding ebikes (the long rack and non-folding front fork both leave it a tad bigger). Despite those, if you want a cargo bike that can pull double duty as a daily commuter, this offers your best chance at doing that. It’s powered by Bosch Performance Sport motor, with a nine-speed Shimano groupset and a Bosch PowerPack 400 battery, a combo that allows it to hit top speeds of up to 28 mph and up to 62 miles of range. 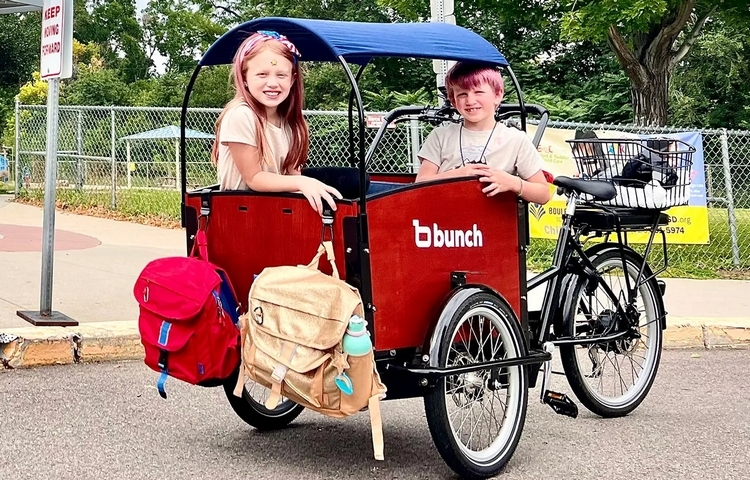 Wider than your typical ebike, this electric cargo trike puts two wheels out front to keep its large cargo box stable. How large is it? Well, it comes with two benches on either end that will allow it to fit up to four kids at a time. If you’d rather use it for non-human cargo, the interior of the box measures 35.75 x 24 x 18.5 inches (length x width x height), so it can accommodate a whole load of different items, with both benches also sporting under-the-seat compartments for smaller cargo you want to stash with extra protection.

It’s powered by a 500W hub motor and a 13.6Ah battery module, a combo that should allow it to cruise at decent speeds, all while providing a range of up to 35 miles. While there are a lot of strange things about it, from that giant box and the trike form factor to the rail-like handlebars, this is an incredibly fun ride, especially if you want an ebike that can carry as much heavy cargo as possible. 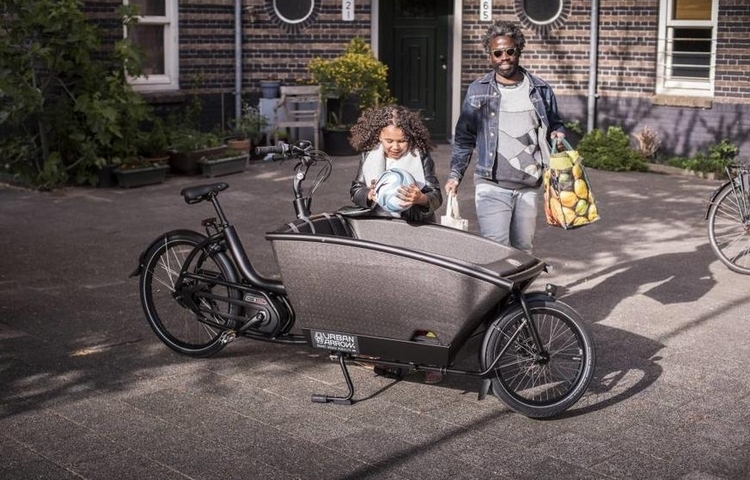 It’s not the sleekest-looking with that large tub of a cargo bay sitting right below the handlebars.  Anytime you want to ferry heavy stuff on a bicycle, though, this will do the trick, as that front storage can handle up 275 pounds of cargo all on its own. Because the cargo box is situated so low, it gets a lower center of gravity that makes it easier to steer even when you’re hauling a big load, while stepless gear shifting allows you to tackle uphill climbs with relative ease. It’s powered by 250W Bosch Gen 3 mid-drive motor hooked up to a 500Wh battery module, a combo that lets it run on pedal assist up to just over 15mph at maximum distances of 31 miles between charges (less if you’re going fast and carrying heavy loads).

Having a long cargo box out front can take some getting used to, but it surprisingly feels natural to ride after a short period. Do note, this is strictly for nicer city roads, as the bike will prove challenging to handle if you live in a city with rough, damaged streets.