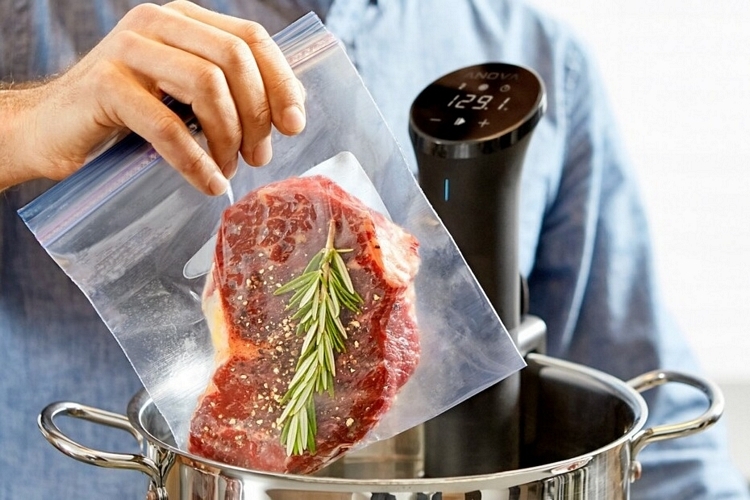 Before the 2000s, sous vide was nothing more than an exotic technique practiced by select chefs and large commercial kitchens. By the 2000s, it was common enough to find in some restaurant kitchens, which used specialty immersion circulation machines costing several thousand dollars. In 2009, the Sous Vide Supreme water oven launched at a price point of under $500, finally giving a suitable option for residential consumers. Nowadays, you can find immersion circulators selling for under $100, making sous vide machines as accessible as many small kitchen appliances.

Of course, just because you can get one doesn’t mean you need one. Between your stovetop and your smart oven to the smokeless indoor grill and more, you probably have enough ways to cook food at home. However, if you like to experiment with different cooking styles in the kitchen to keep your nightly dinners exciting, we can’t imagine a better tool to change things up than an immersion circulator. Preparing your food in a sous vide water bath allows for extremely even cooking that’s not really possible using any other kitchen device, with the machine itself handling the time and temperature precisely, making it extremely easy, provided you know the proper settings for whatever dish you’re making. It also produces some of the tastiest meals around, since your vacuum-sealed food is able to retain all its moisture and flavor the entire time it’s cooking.

These are the best immersion circulators to bring sous vide to your kitchen. 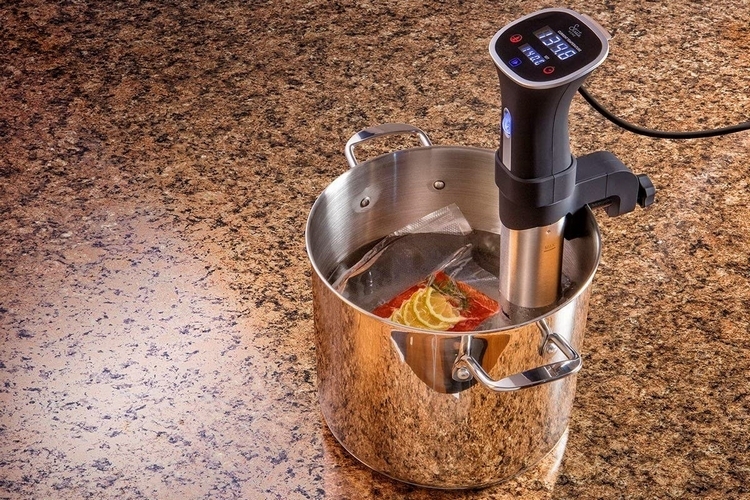 At just 800W, you expect this to be a lot less capable than other immersion circulators in this list. In practice, though, it managed to heat up water to sous vide temperatures at roughly the same pace as the 1000W Anova model below, all white keeping it the desired temperatures (anywhere between 41 degrees to 212 degrees Fahrenheit) in a capable manner.  The outfit recommends using it with no more than four gallons of water, which is plenty enough to let you cook a family-sized meal. Do note, this thing is loud, so it will make a bit more noise compared to all other models in this list.

It has onboard display and controls that let you dial in the time and temperature right on the device, so you can just punch in the settings as soon as you clip it to the pot (it has an adjustable clamp). There’s no wireless connectivity, so you can’t fiddle with the settings on your phone, which, truth be told, makes it a lot simpler to use. The biggest appeal with this model is the price, as it lets you get a proper immersion circulator at well under 100 bucks. 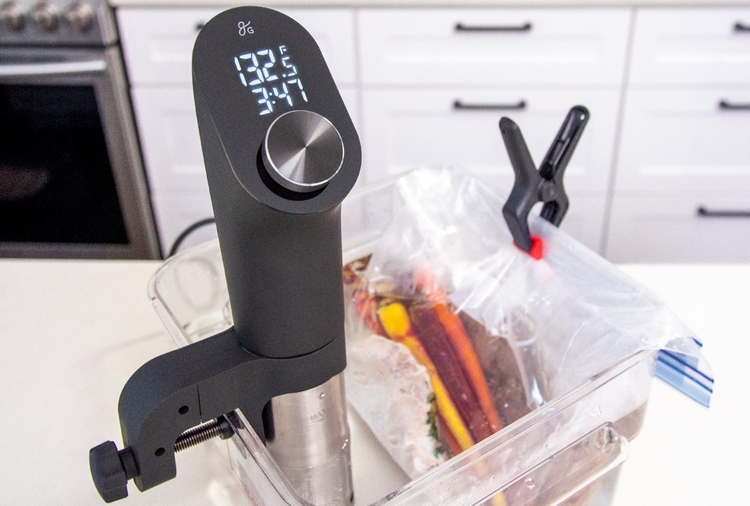 If you want to stay under $100, but want something more powerful than the Monoprice’s 800W, check out this 1100W model from Greater Goods. Similar to that, this one has no wireless connectivity, instead giving you a LED display and control knob on top to manually set time and temperature. We found the control knob a particularly nice touch, by the way, as it just feels a lot more elegant to use than the capacitive buttons you’ll typically find today.

It heats up at an average pace, all while maintaining temperatures really well. If you’re a stickler for precision, you can also recalibrate the device’s temperature pretty easily by pressing the dial for six seconds. Features include a clamp for securing on the edge of your water vessel, a temperature range of 68 degrees to 203 degrees Fahrenheit, and a stainless steel cover that you can throw in the dishwasher. 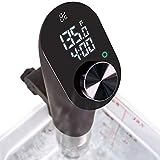 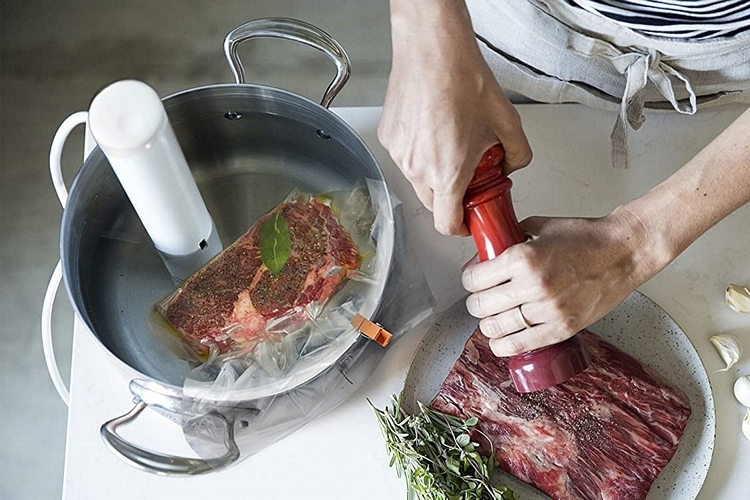 At just 11 inches tall, it’s easily one of the smallest immersion circulators available, all while being arguably one of the fastest-heating, with its 1100-watts allowing it to reach any sous vide cooking temperature in 20 minutes or less. It offers the same impressive accuracy as other models in this list, allowing you to cook any recipes without worries, with a wide available temperature range of 20 degrees to 208 degrees Fahrenheit. Even better, it has a magnetic base and a clip, giving you options in securing it to whatever vessel you’re cooking in. If you use a stainless steel pot, for instance, you can simply snap it to the base of the pot, which should let you use less water and make preheating time even faster than usual.

There are no onboard controls, so you’ll have to manage the machine directly from the app. You can connect to it via Bluetooth or Wi-Fi (it has both), which is nice, although we would still prefer to have an option to bypass the phone entirely. Oh yeah, you can use Amazon Alexa voice commands, but onboard controls will still be nice. However, if you can live with that, it’s one of the better sous vide options out there. 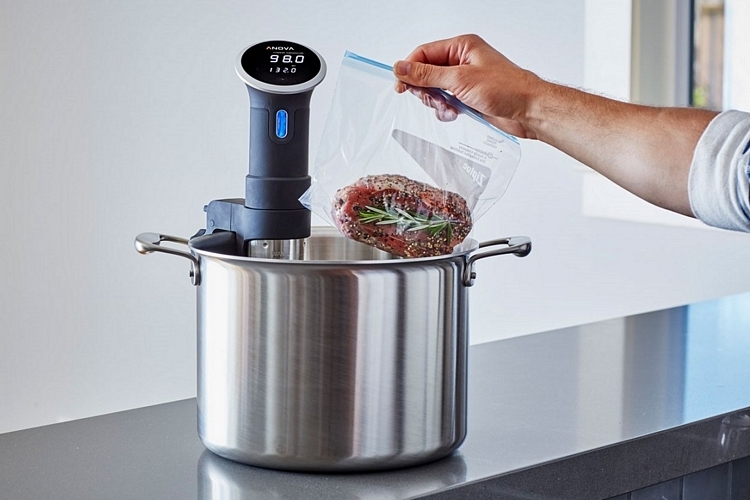 This 1000-watt immersion circulator can heat up your water bath to desired temperatures at an average rate (around 20 to 25 minutes, depending on exact temperature), all while being powerful enough to cook a family-sized meal in one go (up to eight people, according to the outfit). It has an onboard display and controls, where you can set the time and temperature either manually or using preset recipes, with impressive precision keeping the water at exact temperatures (anywhere between 77 degrees to 210 degrees Fahrenheit) the entire time. Built-in wi-fi allows you to connect it to your home network, too, so you can control the device from a smartphone anywhere you are.

A removable clamp allows you to easily secure it along the edge of any cooking pot or food-safe plastic container, complete with the ability to adjust in width, so it can fit any vessels up to 1.2 inches thick. While it’s not the fastest-heating option, we do appreciate the onboard controls, since, let’s be honest, who wants to pull out their phone every time they’re going to cook something? 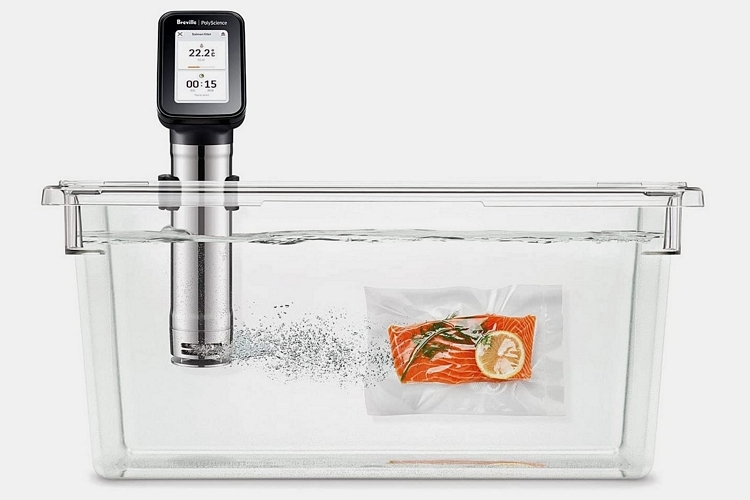 Oftentimes, when an immersion circulator gets a “Pro” label, it only means it can handle more water, heat up faster, or cook larger meals. Basically, there’s more power than its non-pro counterparts. That’s not the case with this pro-grade sous vide machine from Breville, which improves the sous vide function in a variety of ways.

For instance, it has a 1,450-watt heating element that can go through up to 17 liters of water per minute, allowing it to heat up your water bath a whole lot faster. There are also three speed settings, so it can slow down the heating if it’s a little too fast for your liking. If small 1 to 2 degree variations in temperature is your pet peeve with cheaper immersion circulators, that won’t be an issue here, as it also never seems to veer from whatever temperature you set (seriously, it’s crazy accurate). It also has a “Sous Vide Toolbox,” which can calculate cooking times and temperature on the fly, depending on your food’s various parameters (fresh or frozen, thickness, toughness, shape, doneness level), so you’re not simply restricted to standard presets like most circulators. More impressively, its calculations are impeccable, yielding impressive results each time out.

Instead of LED screen and buttons for controls, it has a full-fledged color touchscreen right on the device, where you can put in precise settings instead of dialing up and down. There’s no wireless connectivity, by the way, so you don’t get access to apps and recipes, which, we guess, is because this is largely aimed at pros who already know what they’re doing in the kitchen. However, if you want pro-grade functions for your home sous vide, this is arguably the best tool for the job.