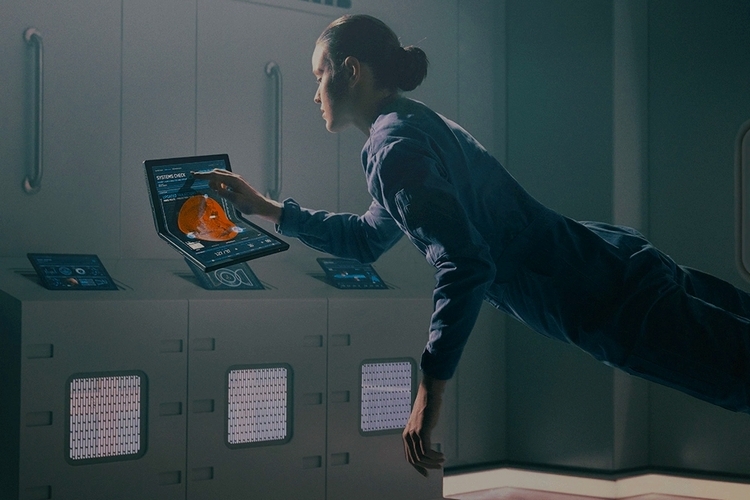 We don’t blame you if you weren’t paying attention to tech gadgets in 2020. Many of us had our minds on other things, after all, with it being a year unlike any other in our collective lifetimes. Despite all the struggles the unexpected pandemic presented, though, we were still treated to an impressive lineup of tech products and consumer electronics that will rival those of previous years.

Out of everything that came out, these are our picks for the best new tech gadgets of the year. 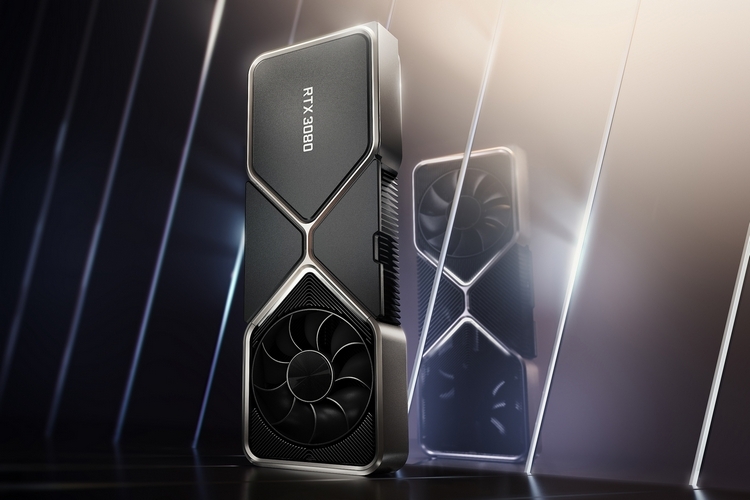 This is a crucial year for GPUs, with 4K gaming becoming the most important consideration going forward. Nvidia did not disappoint with the RTX 3080, which brings more than double the power of its predecessor, allowing it to deliver the kind of high-FPS 4K gaming that would have brought the RTX 2080 Super to its knees. More significantly, though, it came at two-thirds the price of that predecessor at launch, making it an even more attractive purchase for the vast majority of PC gamers.

With a redesigned architecture, smaller computing cores that enabled more than double than that on its predecessor, and 10GB of G6X RAM, it brings enough muscle to enable 4K gaming at a consistent 60 fps or higher, VR gaming at 120 fps, and video rendering at a rate that’s at least 20 percent faster. It also boasts an overhauled cooling system that boasts 55 percent more airflow, 30 percent more efficiency, and three times quieter operation, leading to an all-around better graphics card. Suffice to say, this GPU made a massive leap from last year’s flagship, all while coming in at a more affordable price.

The bad news? Good luck finding one, as it runs out as soon as shelves get stocked. 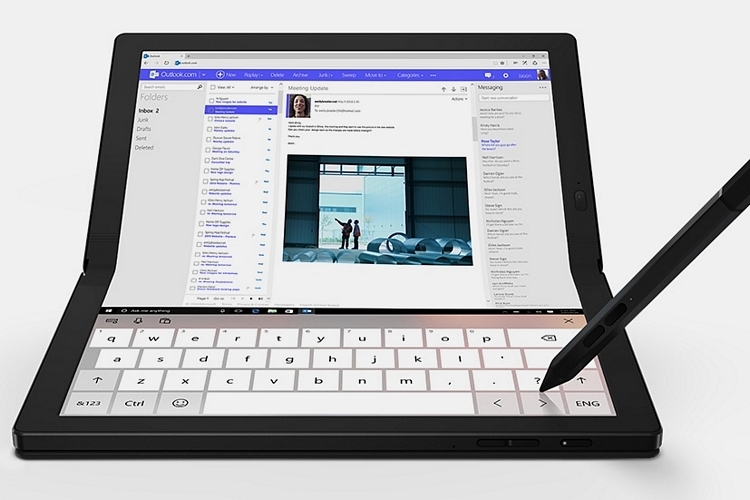 Lenovo calls it “the world’s first foldable PC,” which makes absolutely no sense since folding is exactly what laptops do. The Thinkpad X1 Fold, on the other hand, is a 13.3-inch Windows tablet that you can use like any oversized tablet PC, albeit with the option to fold in half for whatever applications will work best that way. When folded laptop-style, you can snap in the included magnetic keyboard on top, so you can feel like you’re typing on a tiny laptop, as well as run different applications on the top and bottom halves. You can see your Zoom call on the top screen, for instance, while browsing through charts at the bottom, so you can pretend you have an idea what they’re talking about in the meeting. You can also fold it similar to a book, so you can write down notes on one side while having your browser open on the other. Basically, it opens up new ways for people to use their PCs on the go.

Won’t that screen break? According to Lenovo, their OLED panel has been tested to safely open and close over 30,000 times, so this should hold up to regular use. It runs Windows 10 Pro with Lenovo’s own software solutions for the dual-screen setup and, for now, will likely be the only one of its kind in the market until Microsoft finally wraps up their dual-screen operating system, Windows 10X. 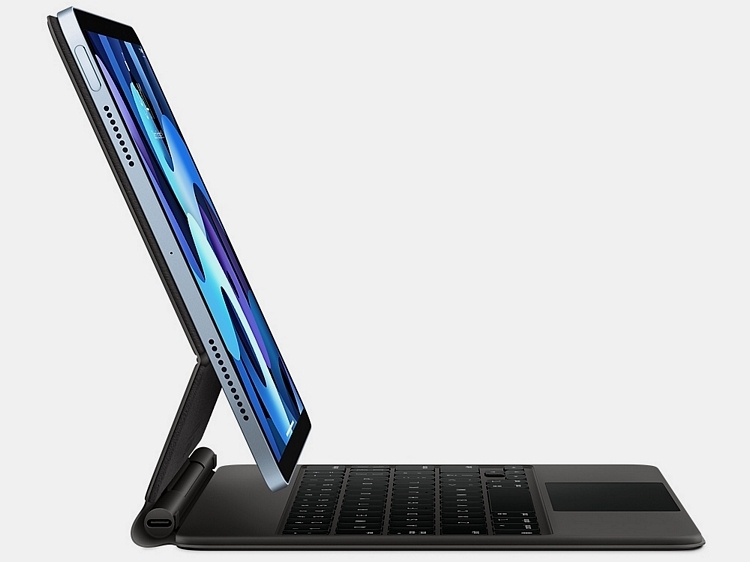 Truth be told, we’ll probably never replace our laptops with a tablet. A full-fledged PC is just so much more flexible about the things it can do. If you’ve long been interested in making the change, however, the Apple Magic Keyboard gives you an even better shot at doing it.

While it’s far from the first keyboard solution for the iPad Pro, the cantilevered arm’s ability to hold the tablet stable at any angle and the scissor switch mechanism underneath each key come together to offer possibly the best typing experience you can ask for in a tablet. Seriously, working on the iPad feels like being on a proper laptop with the Magic Keyboard in tow. 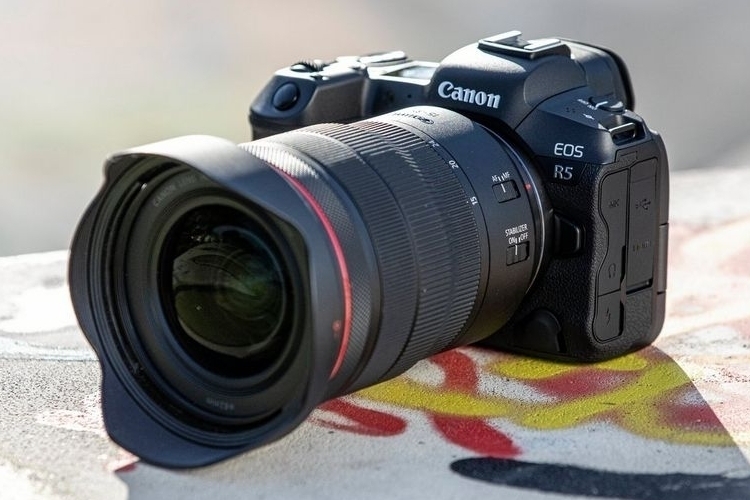 Just when you thought 4K will continue to be the buzzword this year, Canon drops their new full-frame mirrorless camera that can record 8K video at 30 fps. Sure, it heats up a lot when shooting in 8K and requires a bit of cool-down in between shoots. That, however, doesn’t change the fact that it shoots in glorious 8K while being attainable enough for DLSR and mirrorless camera users. And if 8K doesn’t float your boat, it also shoots 4K DCI at 60 fps, complete with the option to shoot in 4K at a whopping 120 fps for slow-motion action shots. 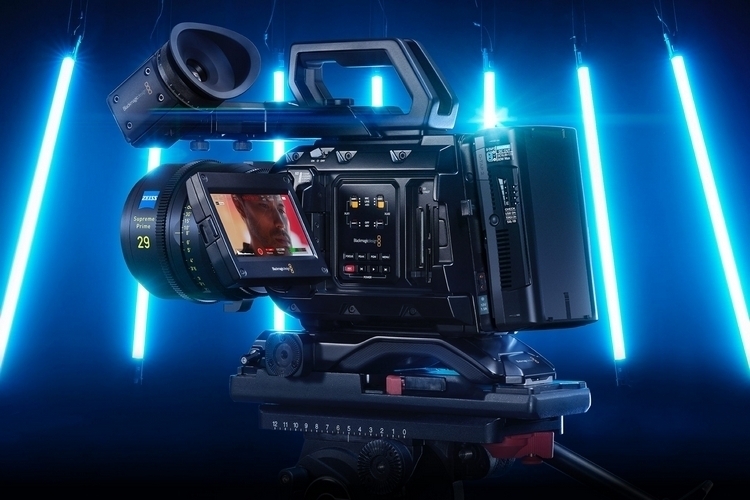 Shortly after Canon announced their 8K mirrorless camera, Blackmagic went ahead and dropped the Ursa Mini Pro 12K, a cinema camera that will let you capture even more stunning 12K video. That’s 12,288 x 6,480 resolution, by the way, which, we’re guessing, none of the TVs or monitors in your house will have a native way of playing. It can capture 12K at 60 fps, 8K at 110 fps, and 4K Super 16 at 220 fps, so this is as ridiculous a camera you can purchase unless you’re running a professional studio. Equally as impressive is the outfit’s compression algorithm, which is able to shrink that 12K footage enough that you won’t need to invest in a full-fledged workstation PC to work on it in post-production, as a regular high-end laptop is supposed to be able to handle it just fine. 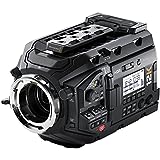 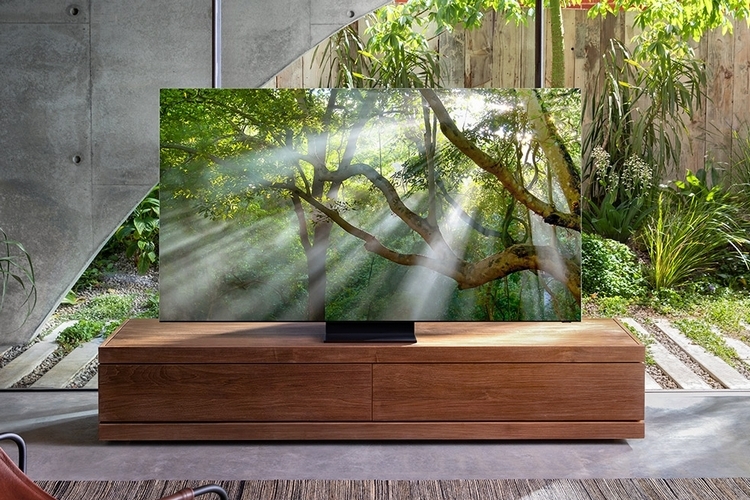 No, we don’t expect you to go out and get yourself one of these things. Chances are, you won’t need (or even want) an 8K TV until a few years down the line. It is, however, an absolute engineering marvel as far as TVs go this year, complete with one of the most impressive upscaling algorithms around that can make even lower-quality sources look good in its 33-million pixel screen. That stunning picture is accompanied by equally glorious sound, courtesy of eight drivers, 70 watts of total power, and Samsung’s OTS+ audio technology that aligns its horizontal and vertical cinematic surround sound to the exact position of the screen. 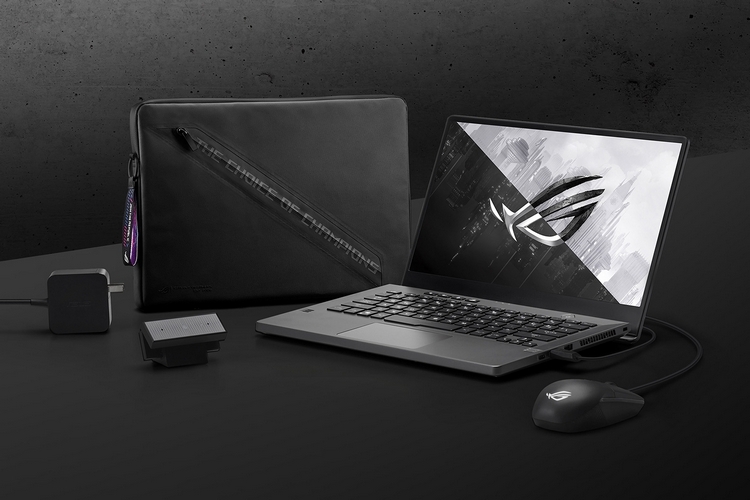 Billed as the “most powerful 14-inch Windows 10 Pro gaming laptop,” the ROG Zephyrus G14 is the first laptop with the new eight-core AMD Ryzen 9 4900HS CPU, which it pairs with an RTX 2060 GPU and a 120Hz display. Yes, 14 inches feels like a weird size for gaming, but the slightly smaller size (gaming laptops usually start at 15 inches) could be one of the main reasons for its admittedly great price-to-specs ratio, not to mention better portability. It even manages to eke out nine hours of battery life, albeit only for everyday tasks (not for gaming), but that does make it quite a well-rounded machine with serious gaming muscle you can call on when needed. 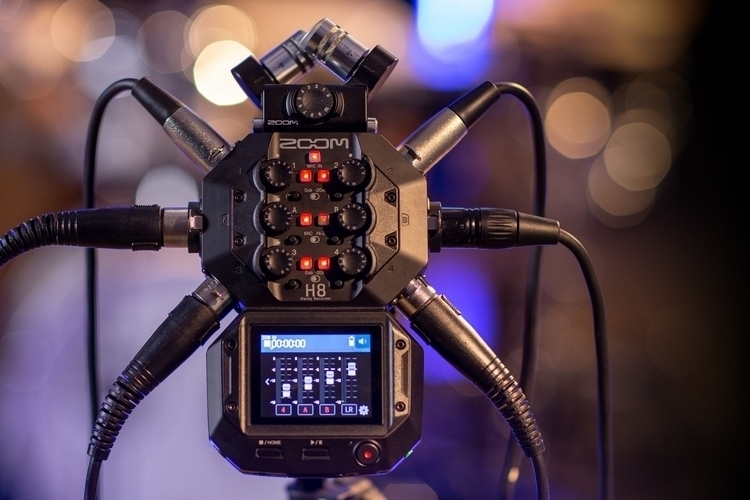 A multi-functional recording device, the Zoom H8 boasts 10-input audio recording, 12-track audio processing, and built-in individual apps for podcasting, music production, and location recording, each of which can be easily accessed from the onboard touchscreen display. It’s portable enough to be held in hand, attached to a tripod (or mic stand), or mounted to a camera, making it easy to integrate as a sound recording tool for any kind of production, while being compatible with an array of capsules for more specialized recording projects (e.g. 360-degree audio recording). Sure, it looks downright weird and intimidating, but this thing can streamline the audio for plenty of productions while being powered by nothing more than four AA batteries. 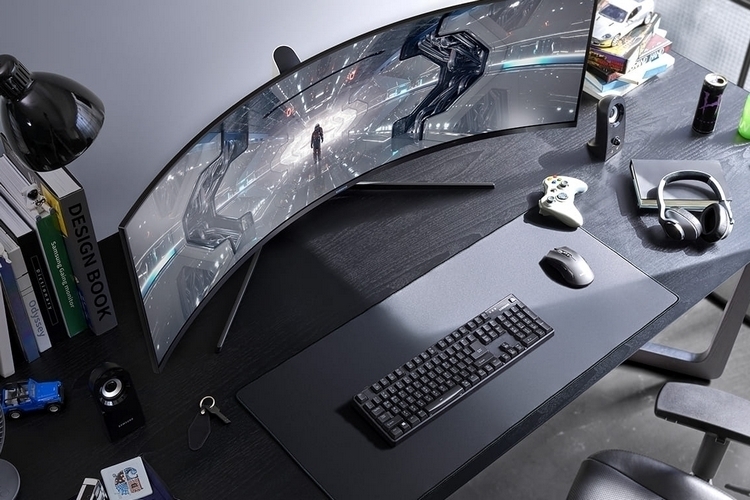 Unlike many other curved monitors, the 49-inch Odyssey G9 has a 1000R curvature – a shape that’s supposed to better match the shape of the human eye, allowing it to better fill a player’s field of view without having them strain to see the edges. The QLED panel also boasts a 240Hz refresh rate, which, let’s be honest, you probably wouldn’t be able to maximize unless you’re playing a 15 year old game on a high-end gaming PC, along with a 5120 x 1440 resolution and a 32:9 aspect ratio, making it the equivalent of two 27-inch wide screens. They even threw in ambient lighting in the back, which it will reflect on the wall behind the monitor, essentially expanding the color visuals beyond the borders of the screen. Sadly, there’s been a lot of stuff online about issues (seems mostly quality control) faced by users who bought the monitor, so might be a good idea to check those out before plunking down cash on this. Hopefully, they can get that fixed because this is an absolute marvel of a gaming display if they can just get the production right. 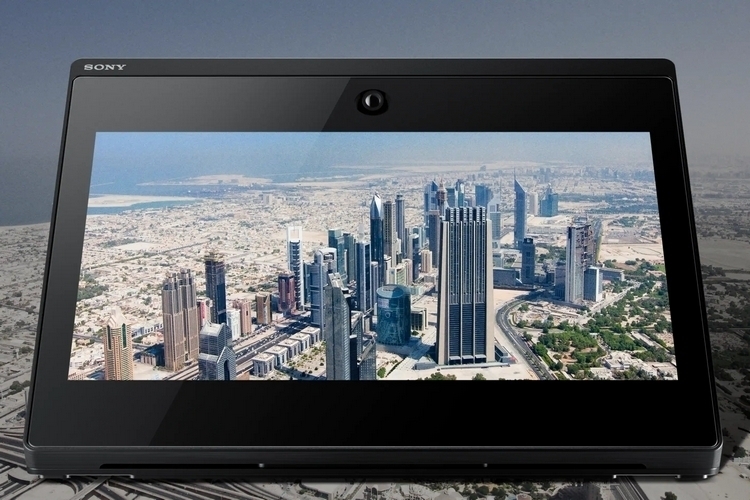 Yes, you can use a VR headset to interact with 3D models in a very intuitive manner. Problem is, that still requires you to wear a computer on your face. Most creatives who design 3D models and VR scenes will probably appreciate not having to put on a large computer every time they want to preview something they’re working on. That’s where this 3D display from Sony comes in.

Designed to give users a holographic 3D view using the naked eye, it uses a 15.6-inch 4K screen with a micro-optical lens that divides it for your left eye and your right eye, showing different perspectives for each one to create the stereoscopic effect. Eye-tracking cameras detect the position of your pupils in real time, which it uses to adjust the displayed image and sustain the 3D effect continuously. Granted, viewing angle is limited to 20 degrees upwards, 40 degrees downwards, and 25 degrees on the sides, although being a first generation product, there’s plenty of room to improve going forward.