The Best Toys Of The 2022 Holiday Season 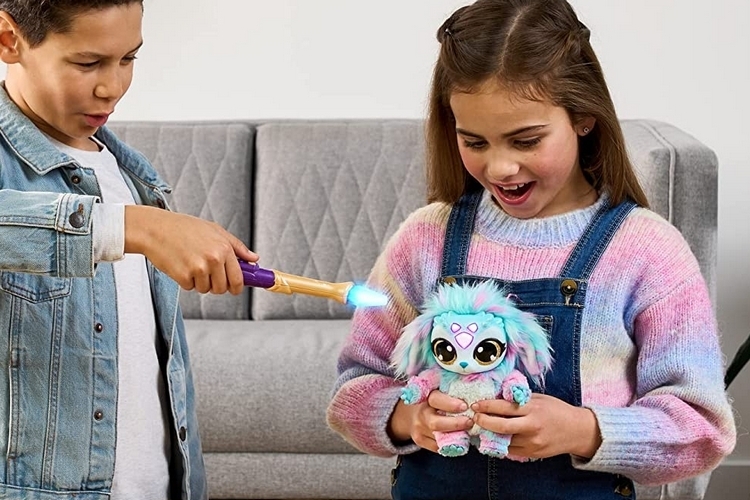 The holidays may be a celebration for everyone, but anyone who has young children in the family knows it’s all about the kids. And nothing brings a smile to those young faces than waking up to new toys on a cheery holiday morning.

As has been tradition for many decades now, finding the hottest toys isn’t the easiest thing to do the closer the holidays get. Those things have a way of flying off the shelves, especially in crunch time, so getting your toy shopping done early is always the winning play.

Want to know which toys are trending to be the most popular this 2022 holiday season? So far, these toys are looking set to be the ones most kids will be clamoring to find inside their wrapped presents under the tree. 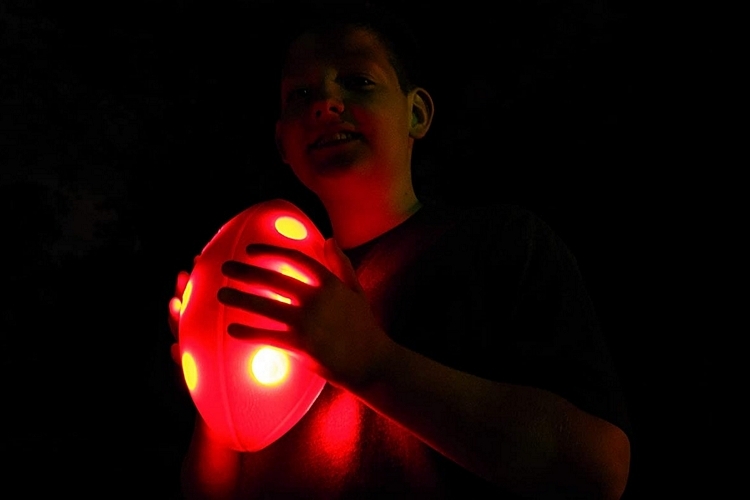 For football-loving kids, this ball throws much like any foam football, so they can step outside and use it for toss-and-catch play at a whim. Unlike your Nerf foam football, though, it comes with a light stick that you can insert into the center of the ball, while holes along the body let the light out, making the whole thing glow like an alien ship streaking through the air. The selling point here is the ability to play in the dark, so you can keep the toss-and-catch going well into the night. 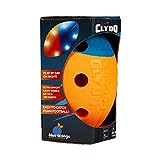 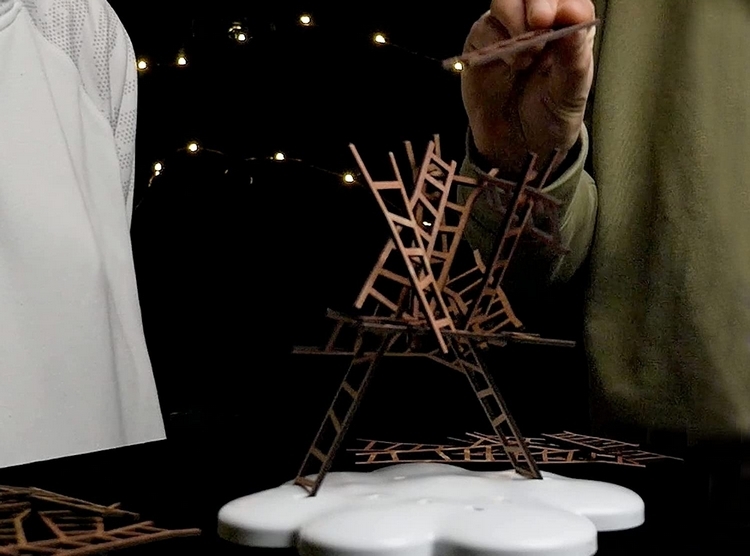 This tabletop game for one to six players combines Jenga balancing with dice rolling, with each face of the dice showing you a diagram of a specific ladder position. When you roll the dice, you need to add a ladder that replicates that exact position. If your ladder falls or topples the stack, you take a raindrop from the cloud. Once all raindrops are gone, players compare the amount of raindrops they have, with the one holding the least amount declared as the winner. It’s a fun game for young children who enjoy tabletop play with family and friends. Oh yeah, it may seem like a game for really small kids, but this really plays best for kids seven and older who have the dexterity to muster that gentle touch. 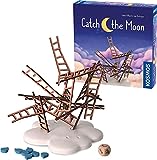 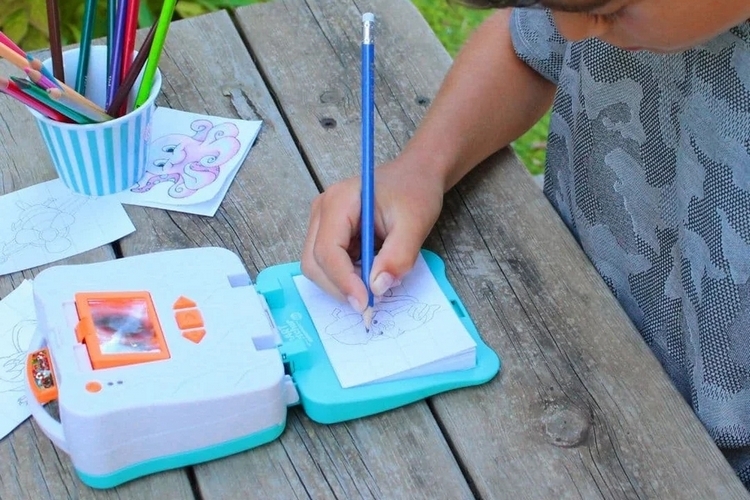 Just like the original smart Sketcher, this toy helps children draw by providing guides that they can follow. Unlike it, this one ditches the projector, instead coming in a more compact size that kids can bring anywhere they go. Kids get a pad with a 4 x 5 inch grid that’s replicated in a small screen where the image they’re copying is shown. Basically, all kids have to do is to replicate the image on the small screen by using the grid as guidelines. They can also upload images to that screen via the companion app, so they can get help drawing any image they fancy. 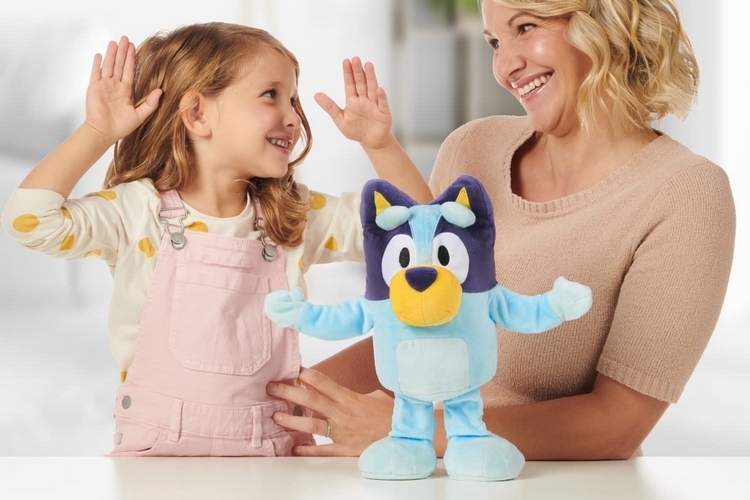 While it’s not the first dancing plush your child has probably seen, any preschooler is bound to be mesmerized by this adorable doll. This female Blue Heller, who stars in the animated show Bluey, brings a special charm as she flails her arms, bends her knees, and balances herself hopping on one foot while playing one of four prerecorded songs. She just looks absolutely adorable. Standing 14 inches tall, she’s the perfect size for cuddling, too, with a super-soft body, deluxe fabrics, and embroidered details. It’s also got 55 prerecorded phrases, all lifted from the show, making this a real treat for kids who enjoy the program. 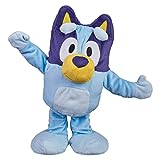 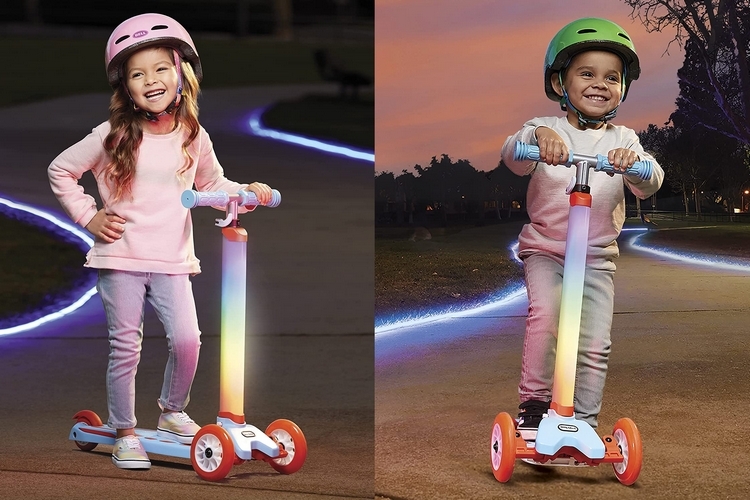 Designed for preschoolers, this colorful kick scooter has a LED-equipped handlebar column that lights up in colorful patterns as they ride faster, allowing them to enjoy a pulsating light show while cruising through the playground. The stable three-wheel design should make it easy for smaller children to master, while a rocking axle on the front wheel allows for more balanced turns. The handlebar is height-adjustable, too, so they can still keep riding it even when they start growing, all while supporting kids up to 125 pounds. 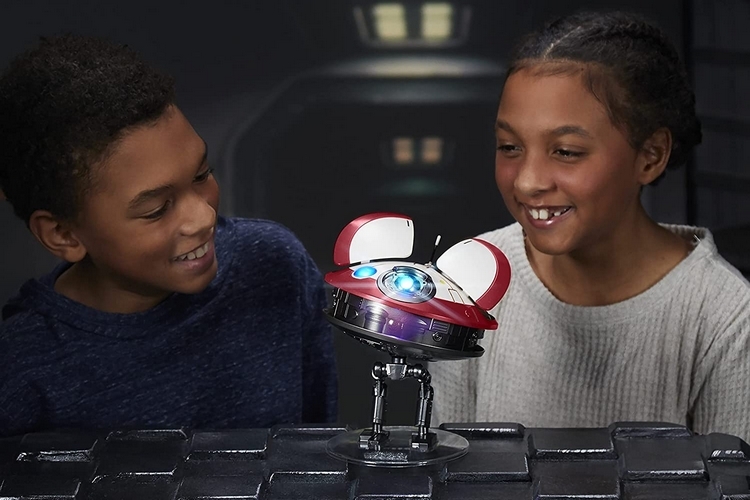 It’s been seven years since the Sphero BB-8 put a Star Wars droid in everyone’s holiday shopping list. Yep, it’s been far too long. While it doesn’t quite have the same buzz as the spherical droid from The Force Awakens, the L0-LA59 from Obi-Wan Kenobi should find a place in a number of children’s wish lists this season. An animatronic, the toy droid with feminine programming can open and close its mouth, as well as move the panels on the top of its head and tilt its head from side to side, all while playing droid noises and putting on a light show. It’s interactive, too, as it’s able to respond to head touches and background noises. 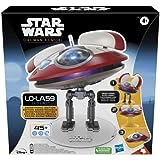 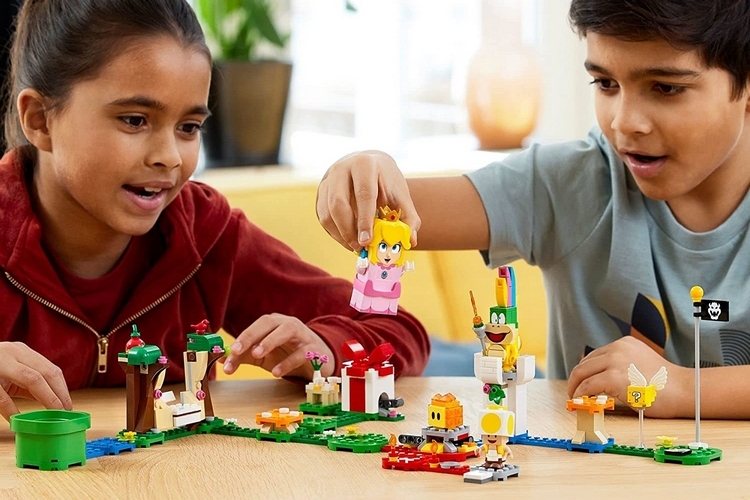 Although Princess Peach has had her own games before, let’s be honest, those titles came out way back in 1990 and 2005, so it’s probably high time we got the ruler of the Mushroom Kingdom to feature in a modern title. While we wait for Nintendo to get around to it, maybe your Mario-loving kids can appreciate Peach Toadstool in her own LEGO set instead, which lets you build a LEGO Peach figure, along with an entire course filled with familiar items for the castle-dwelling princess to explore. Like other characters in the LEGO Super Mario Adventures series, the Peach figure is interactive, with a color sensor, LCD screen for her face, and built-in speaker. 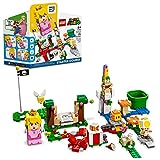 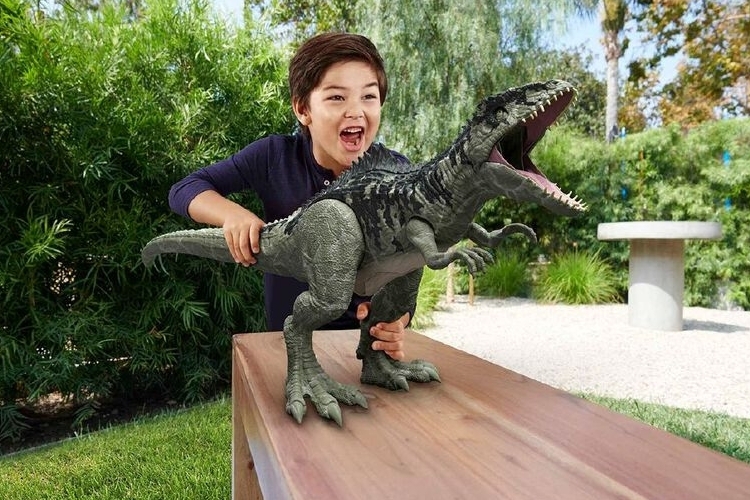 The merchandising cycle for Jurassic World is pretty straightforward. Make a new movie, introduce a new prehistoric star attraction, and release it as a gigantic dinosaur toy. For the latest movie, that honor belongs to the Giganotosaurus, which, we’ll be honest, we’ve never even heard about until the movie introduced it as “the biggest carnivore the world has ever seen.” The action figure version of the tyrant lizard measures 14 inches tall and 39 inches long, with a large mouth that opens wide to feast on smaller minifigures it encounters along the way. Yes, it can swallow those minifigures, too, although you can easily retrieve them by unlatching its stomach, where they end up falling into. It’s got plenty of articulation, too, so you can pose it in a whole lot of different ways. 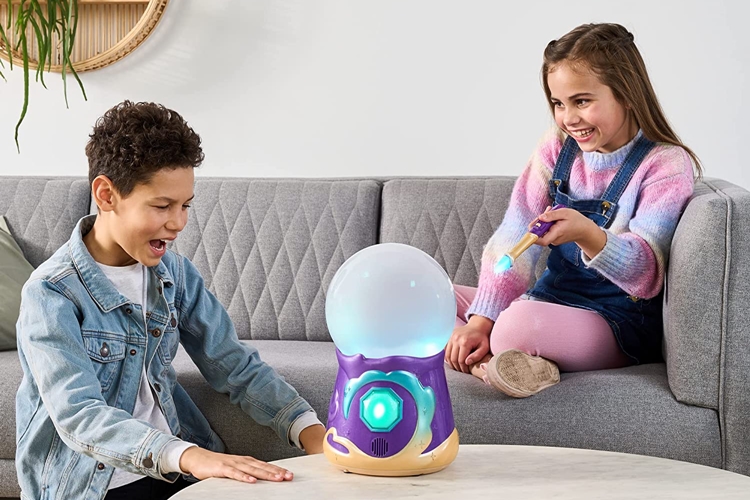 Last year, Magic Mixies dominated Christmas lists with their misting cauldron, which allowed kids to “magically” spawn an adorable plush doll creature using a mix of wand work and mystical potions. It was really cool. This year, they’re looking set to replicate the feat with the Magical Crystal Ball, which swaps out the witching cauldron for the fortune telling staple. The crystal ball is paired with a magic wand, both of which come with synchronized LEDs that you can use to create a stunning light show while you perform spells of scrying and divination. There’s also a mist that forms inside the ball to give it that mystical appearance, while an onboard speaker produces over 80 types of sound effects designed to match whatever spell you’re casting.

Even better, one series of spells will allow you to “conjure” a plush doll, which will magically appear inside the crystal ball. More than a simple plush, the doll, which came from inside the ball, actually contains the LEDs and speaker, so you can perform various interactions directly with it using the wand. If you prefer doing fortune telling work, you can simply put the doll back into the crystal ball and have it perform its magic from there. Do note, the mist effect inside the ball is produced using a compound, which you’ll have to refill when it does run out. 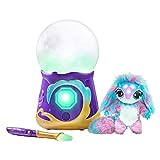 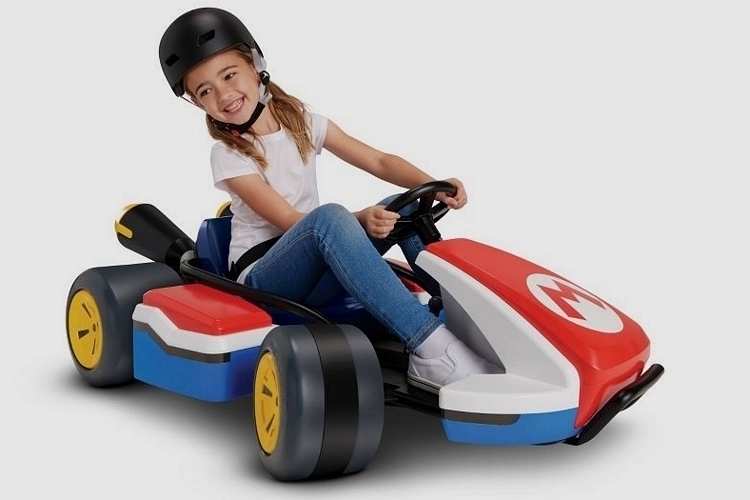 If your kid wants a ride-on car, it’s hard to go wrong with this replica of Mario’s Standard Kart from the franchise, allowing kids to bring Nintendo racing to the neighborhood streets. It’s a pretty faithful recreation of the in-game ride, albeit without actual antigravity boosts, so you don’t have to worry about your kids flying off. Equipped with a 24V battery, the ride-on can be driven at speeds of up to 8 mph, with three speed settings and a reverse, so kids can easily back up when they miss a turn. It comes with engine and item sounds lifted directly from the games, oversized rear wheels that allow it to drift during sudden braking, and a maximum supported weight of 81 pounds, so Dad will, sadly, not be able to live out his childhood fantasies on this thing.