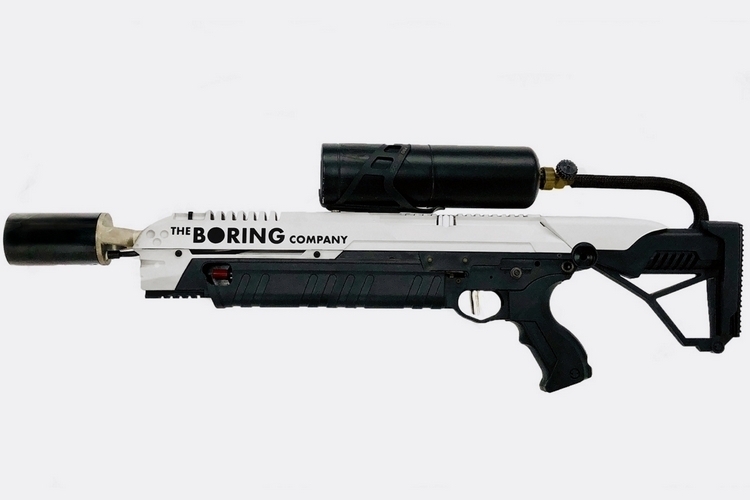 Elon Musk’s Boring Company has one of the most ambitious goals in the business world right now, with their plans to create an all-new, high-speed transportation network several levels under the earth. With the company preferring to avoid outside investments, though, they’re going to need a lot of money to get there. Hence, the outfit’s penchant for raising funds using unusual avenues, such as that time last year when they sold 50,000 hats. This time around, the company is reprising the trick, but with a different product: the Boring Company Flamethrower.

That’s right, Musk went ahead and built a Boring-branded flamethrower that you can use to light up the way when exploring one of Elon’s future tunnels. No, this isn’t the type you will use to burn entire fields. Instead, it’s the sort that spits out a relatively small frame around a foot or so long, so it looks cool while not being entirely useful for industrial applications. Basically, it’s a toy flamethrower. Sure, you can burn a house down with the darn thing, but it’s a toy all the same.

The Boring Company Flamethrower comes in a form factor resembling a rifle, making it look like a knockoff Nerf blaster that you can use to shoot foam darts at everyone in sight. Except, instead of setting off foam projectiles, the darn thing shoots a full-bodied flame that you can use to fire up the grill, roast the marshmallows, and battle that friend of yours who unleashes hadoukens using a Pyro Mini.

Unlike traditional flamethrowers that require hooking up to a large gas tank, this thing uses what appears to be a small propane canister situated on top of the rig, powering the flame-throwing action without having to be tethered to something large and heavy. Yes, that means it’s absolutely incapable of creating flames as big as traditional flamethrowers, with a function that’s probably a lot closer to small torch guns fueled from a propane canister, albeit with a more satisfying flame.

To use the Boring Company Flamethrower, simply point it up in the air and pull the trigger to unleash the flame. From the brief clip available on the product page, it looks like the flame keeps going as long as you keep the trigger pressed, similar to a traditional flamethrower. Of course, with nothing but a small canister of propane providing fuel for a flame of about a foot or so long, we have no idea how long it can keep the flame going. We’re guessing this is going to use up a whole lot of gas if you decide to play around with it at any point.

Is it legal? As it turns out, it actually is. According to Musk, it is, as the Bureau of Alcohol, Tobacco, and Firearms allows the ownership of devices with flames shorter than 10 feet. Since the flame on this thing doesn’t exceed two feet, it does seem to clear every imaginable hurdle. Whether your wife, mom, or roommate will appreciate you actually having one in the house, though, is another matter entirely.

The Boring Company Flamethrower is now available for preorder, priced at $500.