No, the Consumer Electronics Show (CES) is not a motor show. However, with the increasing amount of electronics making their way into our cars, the transport category has become a prominent fixture of the trade show in recent years. This year is no different, with big names like BMW, Volkswagen, and Honda having a strong presence at the event alongside upstart companies looking to make their mark in the future of consumer transport.

These are the coolest cars and vehicle tech at CES 2023. 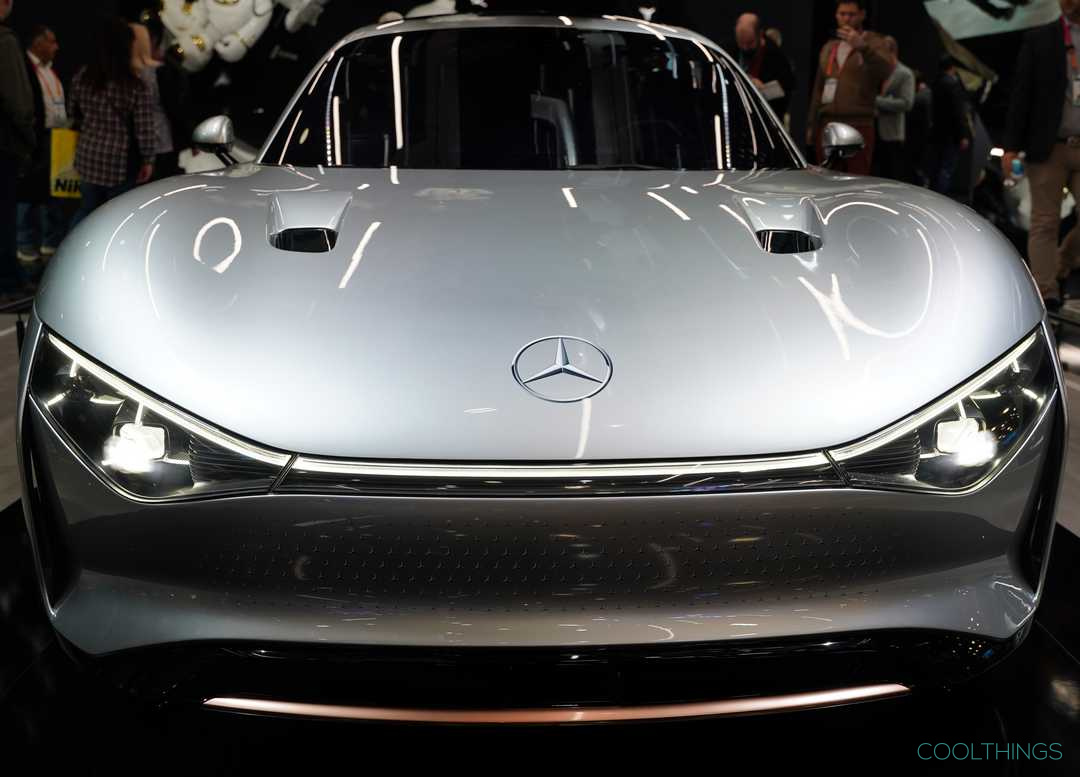 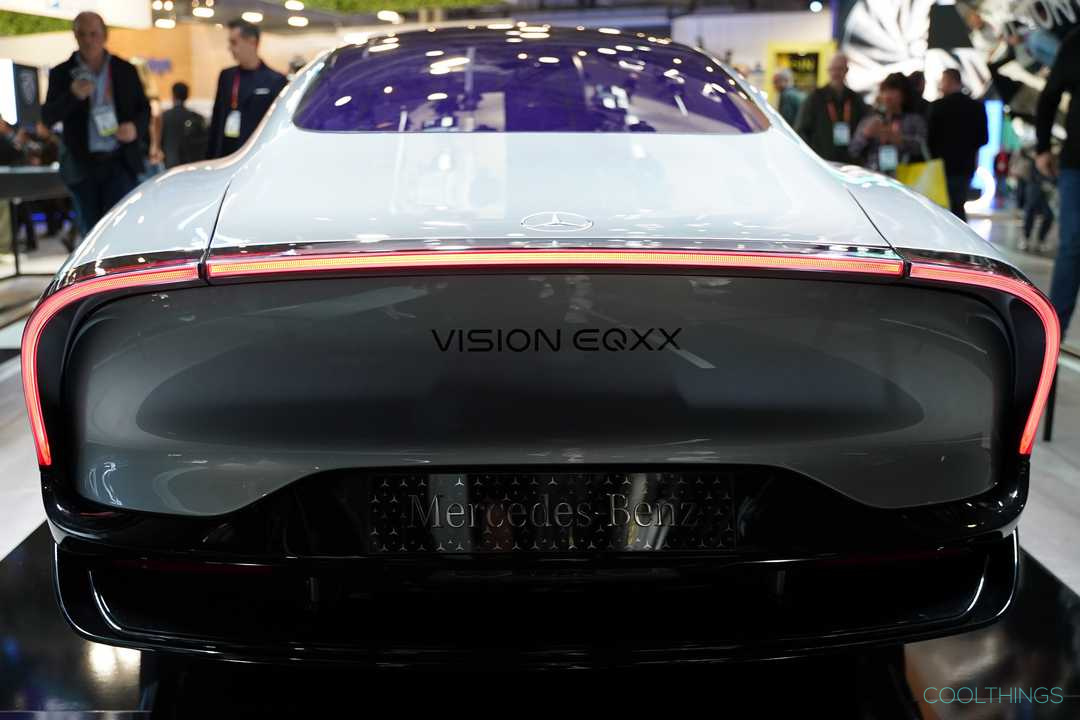 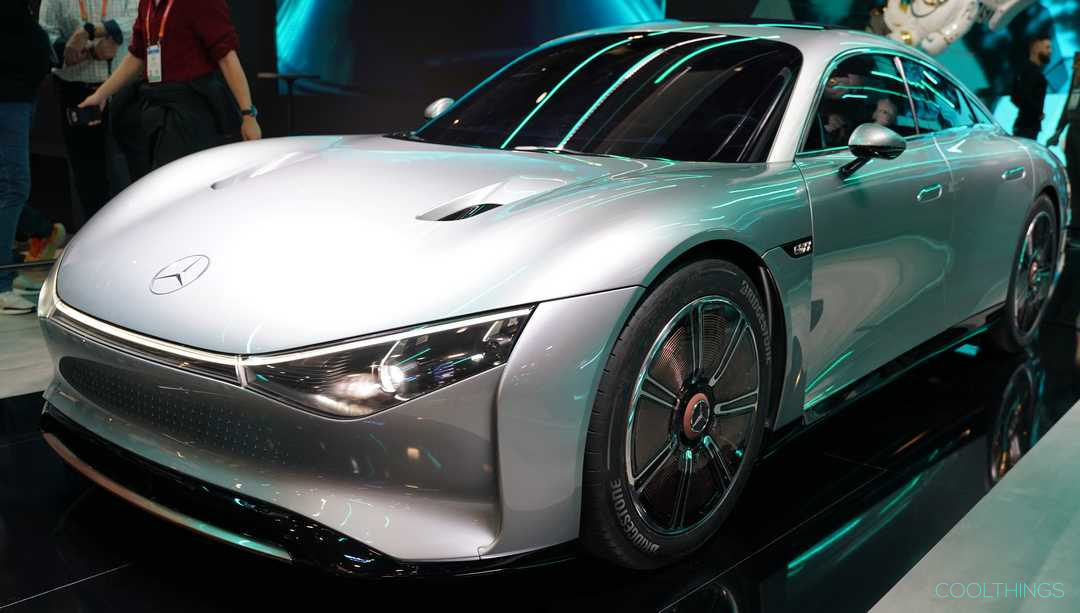 Touted as the most efficient Mercedes-Benz ever, this concept EV originally introduced last year is also on hand at CES. How efficient is it? On multiple occasions last year, the luxury automaker showed off its mettle by driving the car over 620 miles on a single charge, even going a whopping 745 miles once on a Germany to England trip without recharging. That’s right, this EV holds enough charge to get you through very long drives and back.

Do note, it’s a technology demonstrator, so it’s a showcase vehicle for whatever EV tech the outfit is likely to put in their future cars. That tech includes a series of solar panels on the roof and rear window areas, which power the various 12V systems in the car, all while maintaining an impressive 0.17 coefficient of drag (in comparison, Mercedes’ own EQS registers at 0.20). It also uses a 920-volt battery system in favor of the 400V used in most EVs, which allowed the car to shave off some weight, as engineers were able to use thinner wiring.

Along with showing off the car, the company also announced plans for the rollout of their own 400-hub high-power charging network across North America, which is scheduled to finish in 2027. 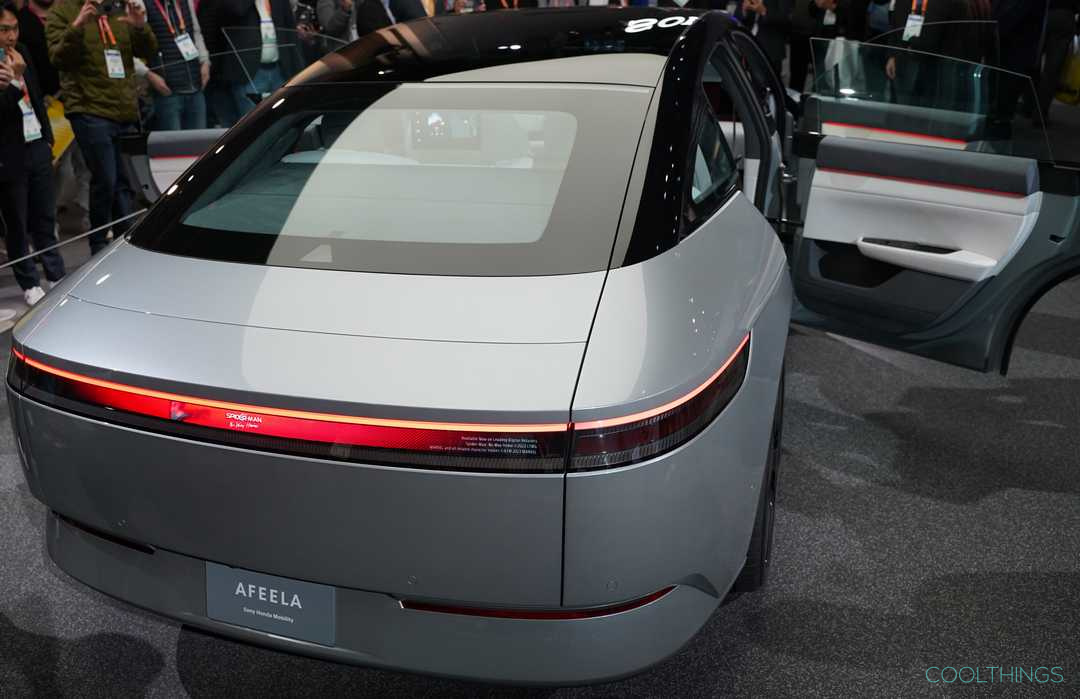 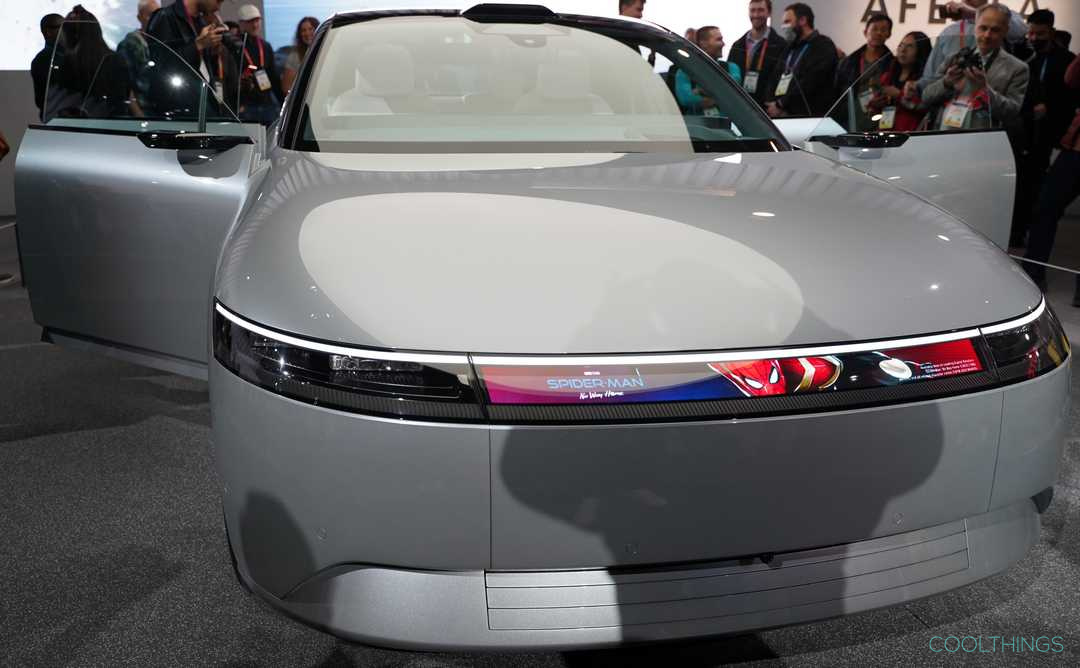 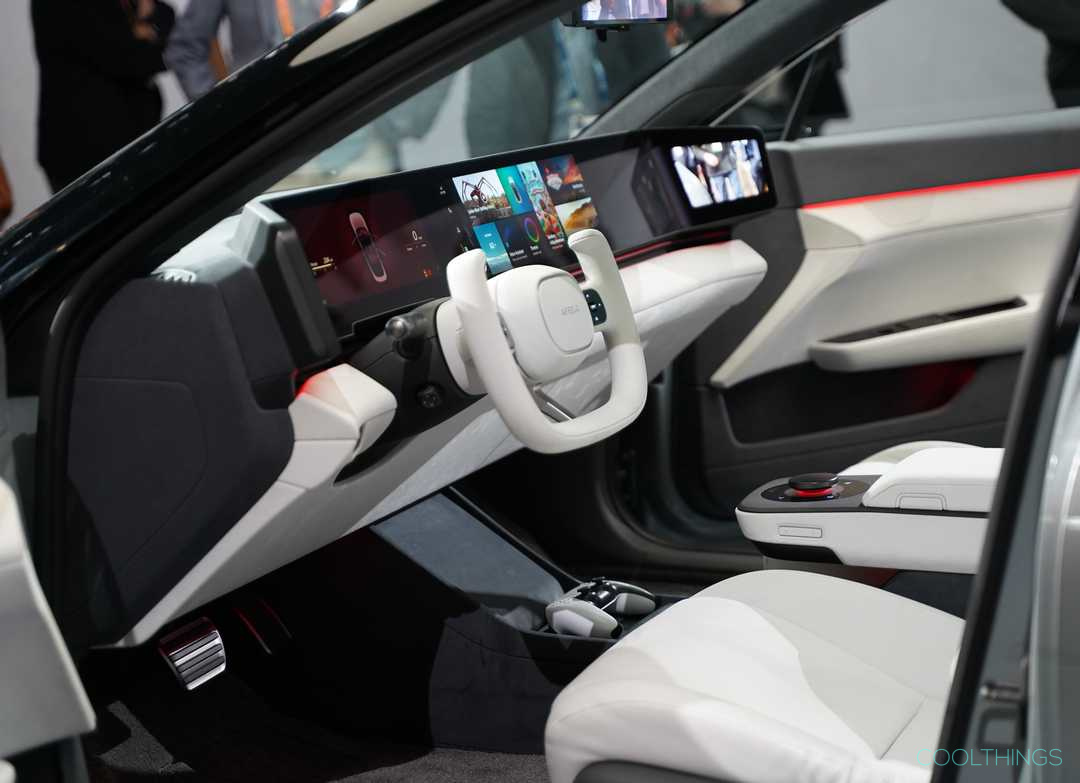 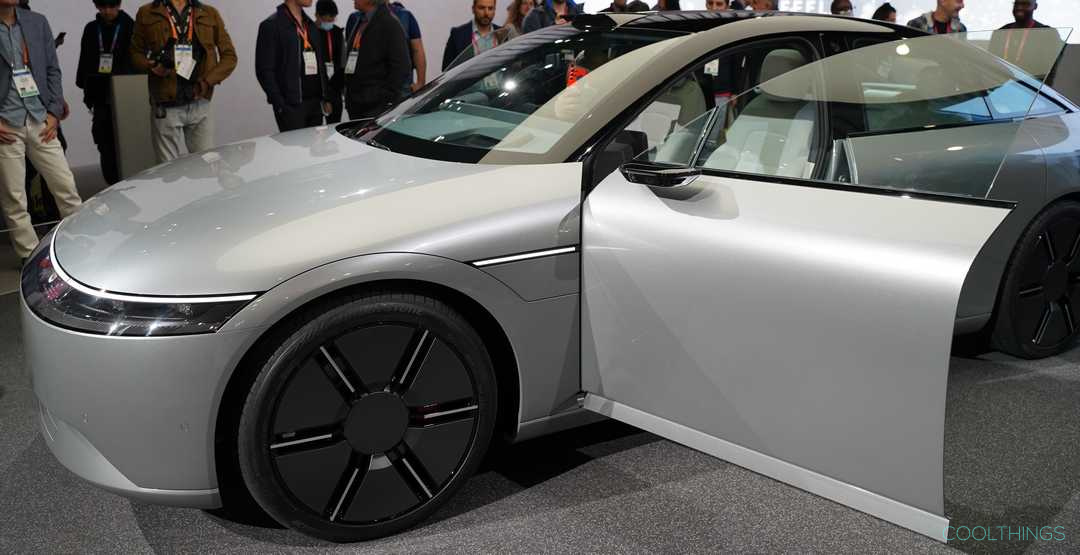 Sony and Honda have, apparently, teamed up on a new automotive venture called Sony Honda Mobility, with the Afeela sedan being their inaugural prototype. A tech-heavy vehicle, the electric car comes with 45 sensors distributed throughout its interior and exterior, allowing it to monitor a gaggle of data to inform it of your driving performance in real-time. It’s built on Qualcomm’s Digital Chassis platform, which aims to help automakers produce intelligent, cloud-connected vehicles. From what we can tell, it’s still a long way out from any actual production, so this is probably a work-in-progress we’ll see more of at next year’s show. 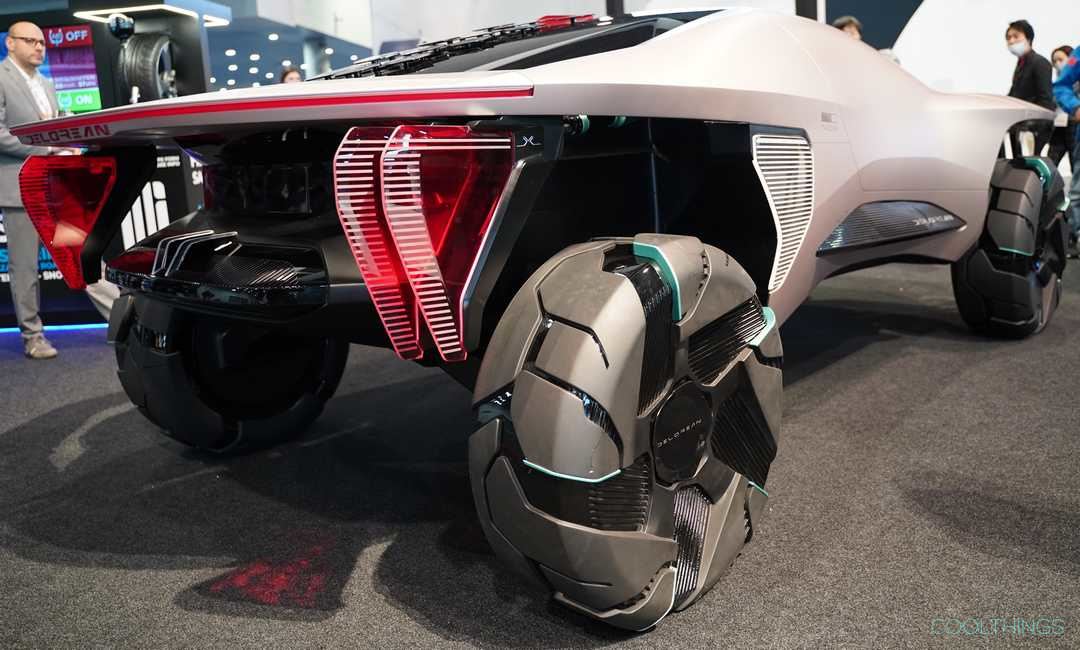 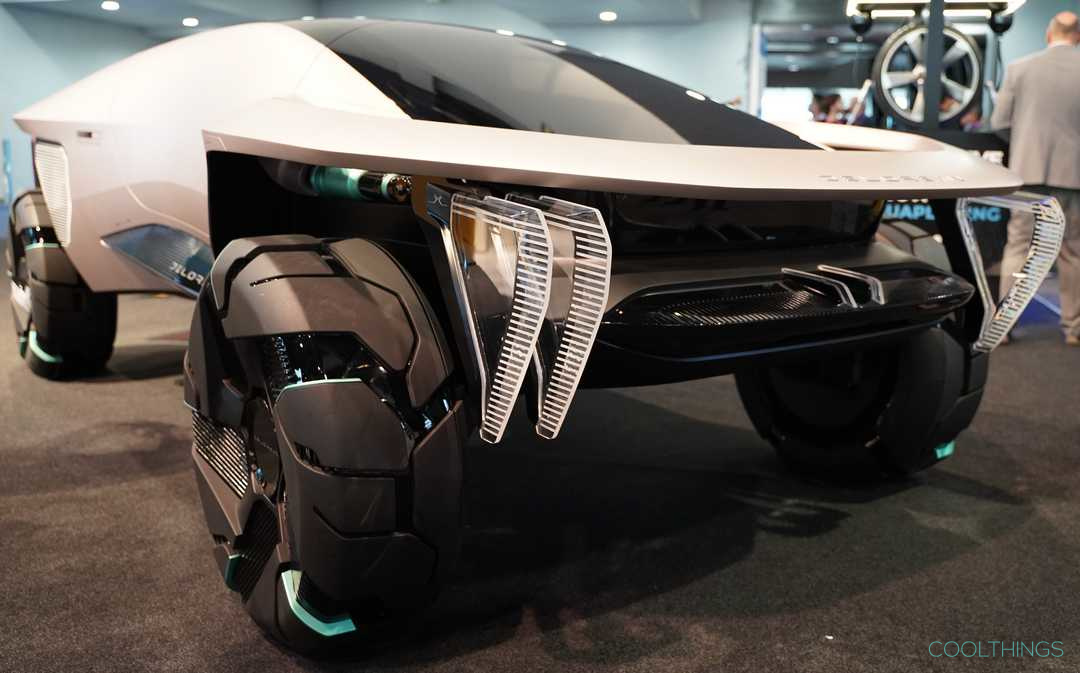 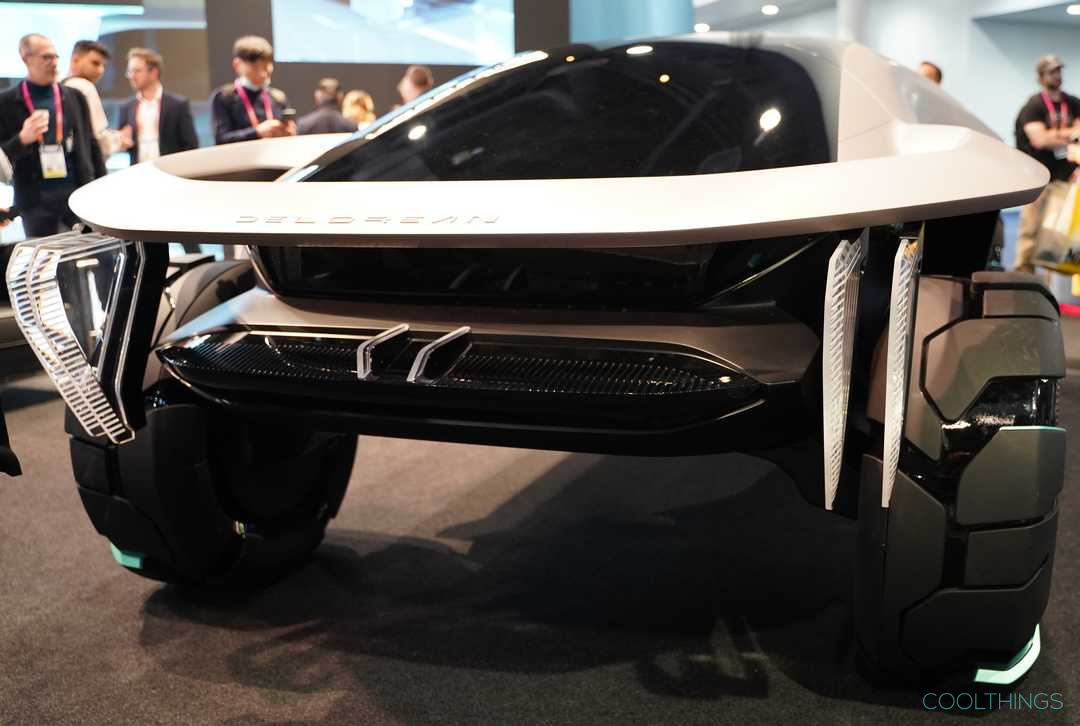 No, this isn’t the same Alpha5 that DeLorean released in concept photos early last year. Instead, it looks more like the Baja-themed Omega concept that they showed in renders just a few months ago. Why does it look so futuristic? Well, the Omega was billed as a complete departure from contemporary car design since it’s a concept designed to imagine what an autonomous vehicle will look by the time the year 2040 rolls around.

Now that they built this prototype, we’re actually hoping they won’t wait till 2040 to make this a production vehicle, since we’re definitely curious how this wild-looking car will actually drive. If they do make this now, we imagine it will produce comparable performance to the outfit’s upcoming Alpha5, which hits an estimated top speed of 155 mph, goes from standstill to 60 mph in under three seconds, and posts a reasonable 300 miles of range on a single charge. Of course, given that they’re priming this as a 2040 concept, they undoubtedly have loftier goals in mind for the car’s eventual performance numbers. 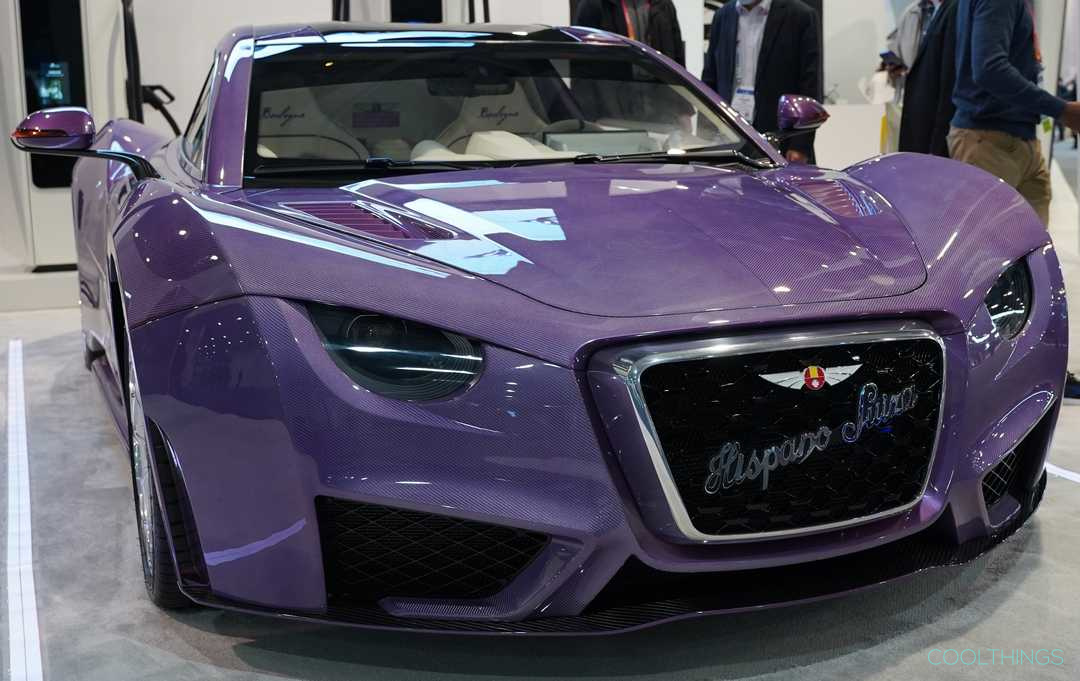 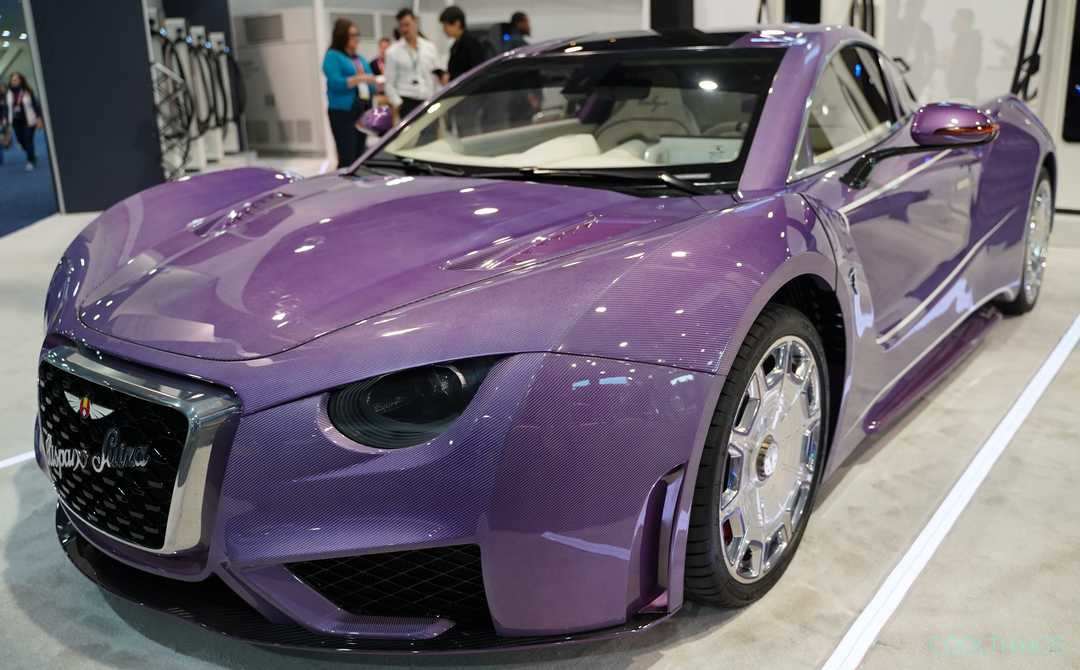 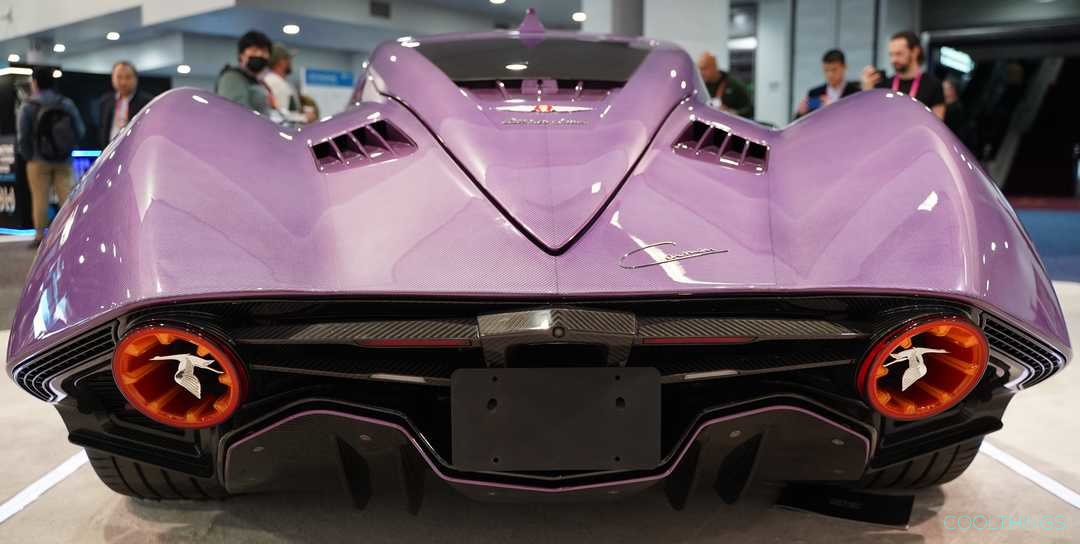 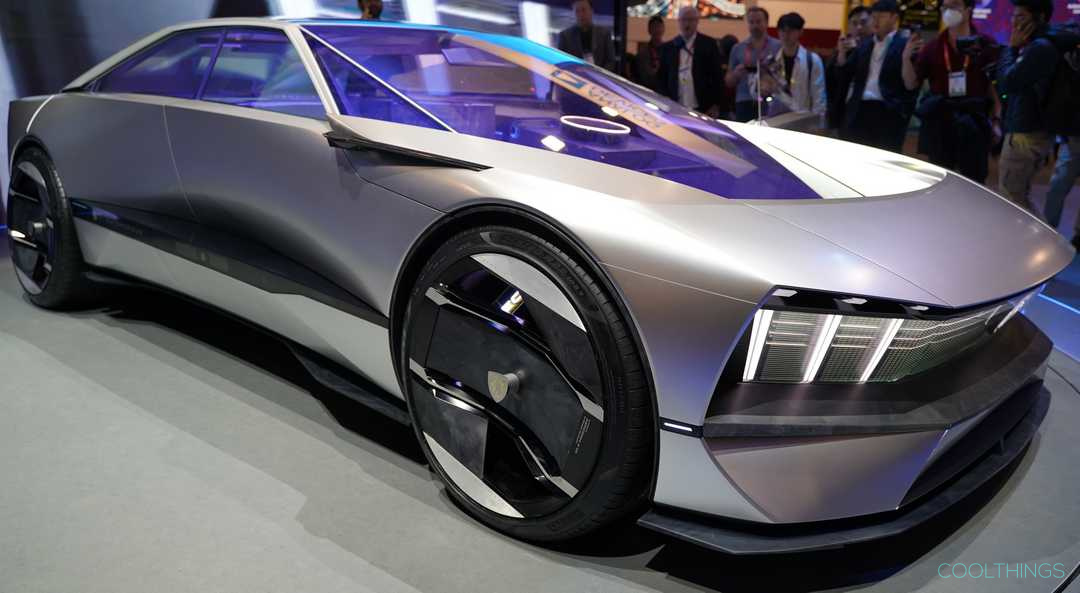 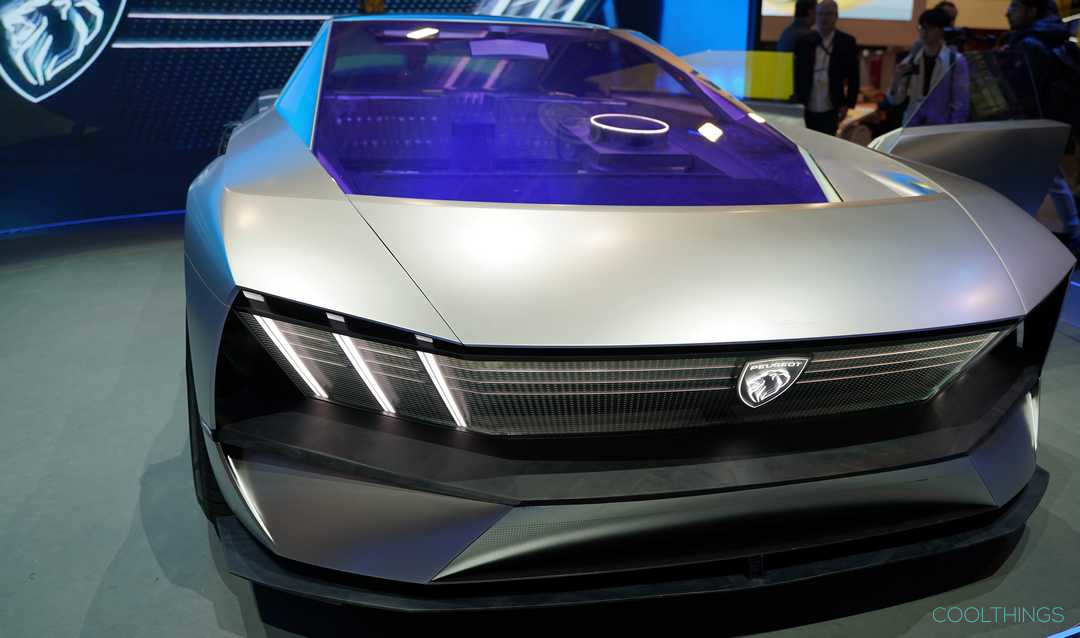 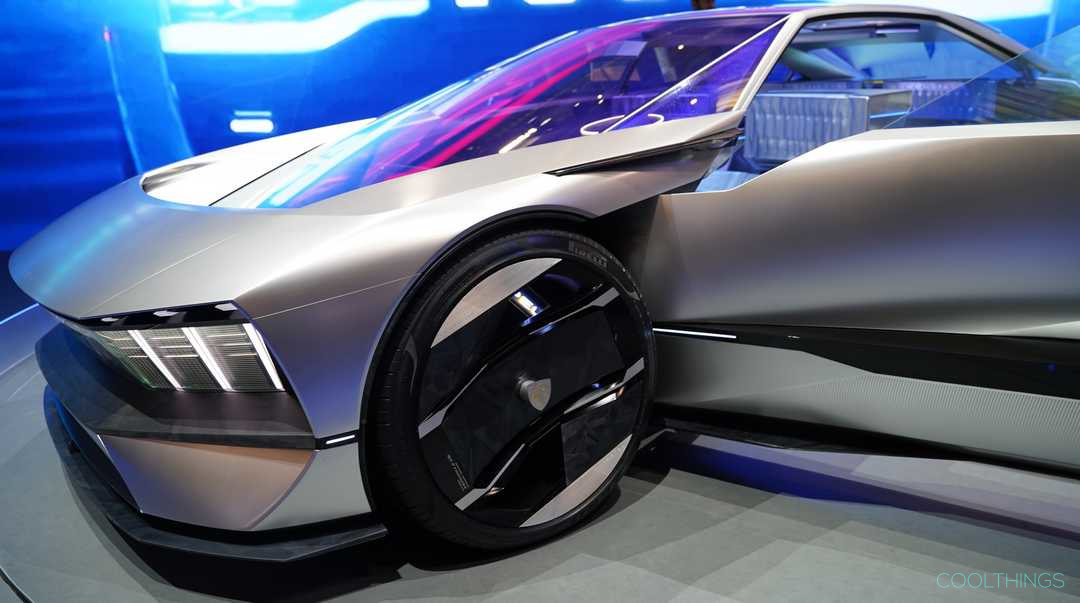 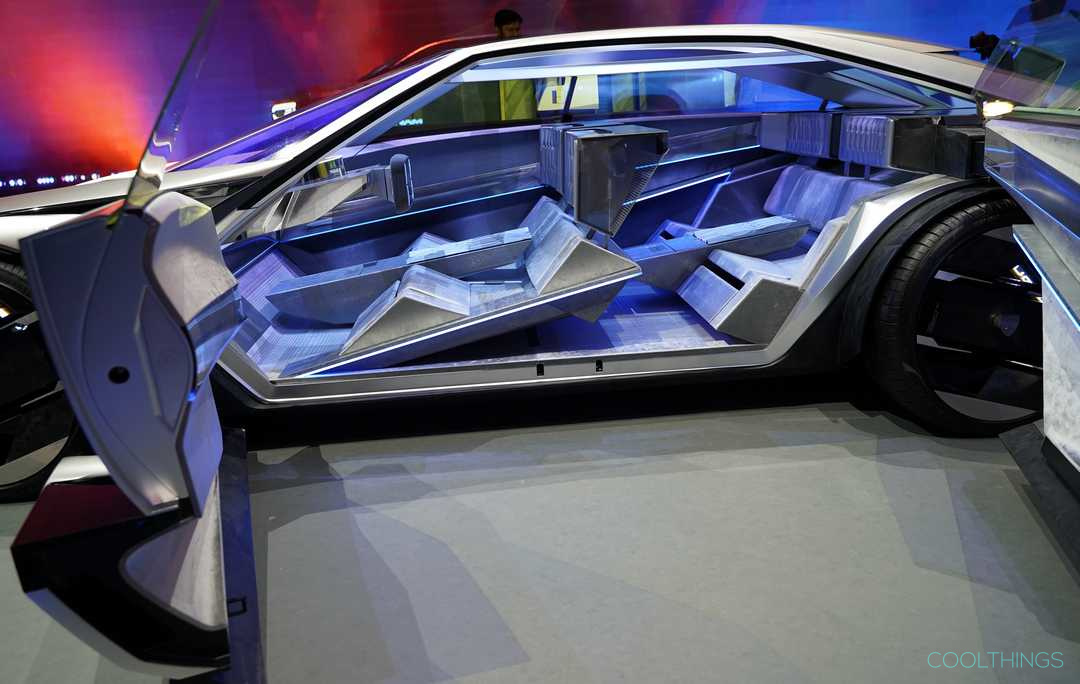 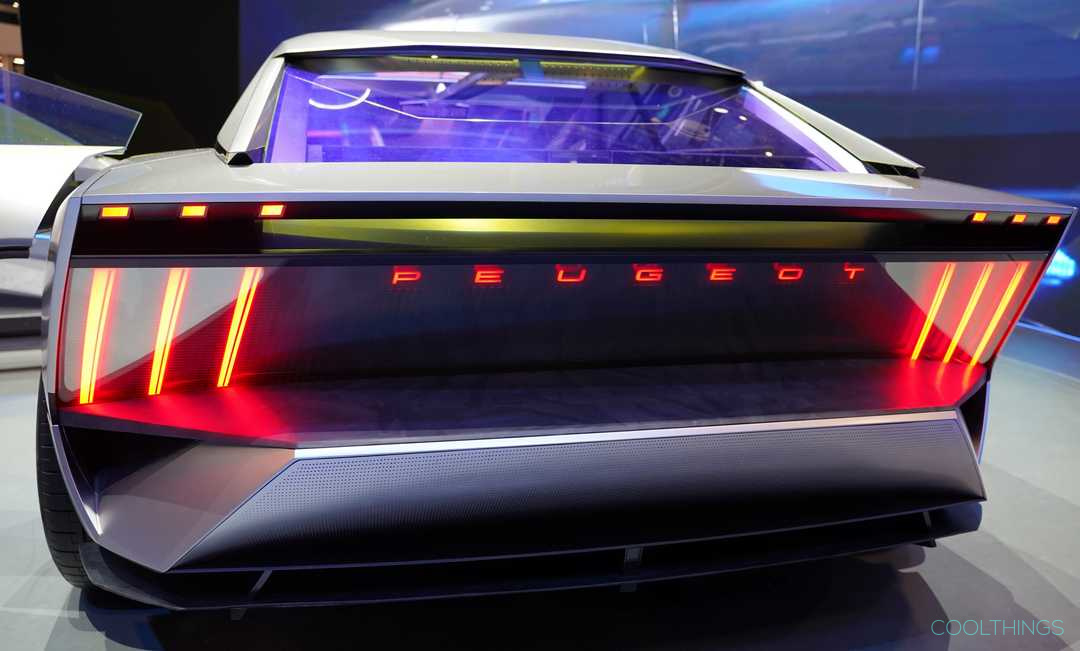 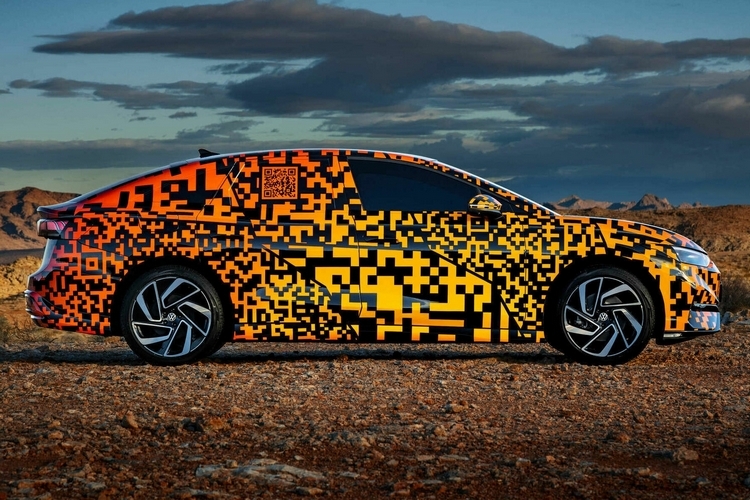 Volkswagen’s newest electric sedan was on hand at the show floor with a model covered in a colorful digital camo paint job that can light up at the driver’s command and even sync with whatever’s blaring in the car’s sound system. That’s right, this car’s paint job doubles as a light show, giving new meaning to the concept of a “party car.” According to VW, a total of 40 layers of paint have been applied to the car, some of which are conductive while others have insulating properties. As a result, 22 different areas of the vehicle’s paint job can be controlled individually, allowing for some really cool light effects. The car, by the way, is based on the outfit’s previously-revealed Aero3 concept, which is expected to have a 435-mile range and an augmented reality HUD. 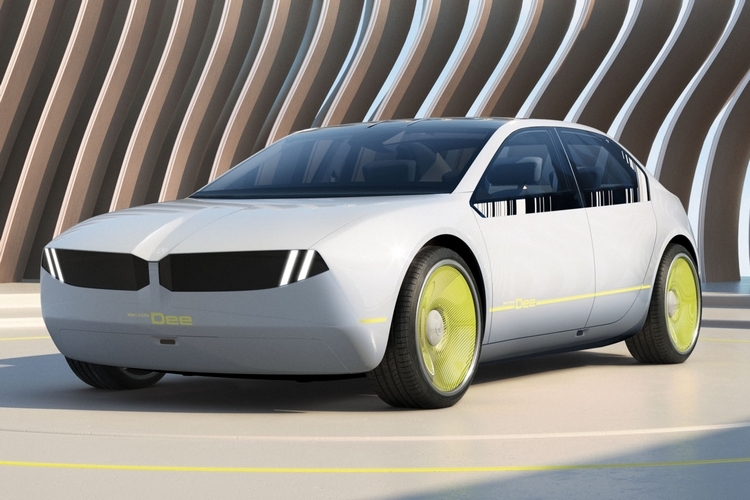 DEE stands for Digital Emotional Experience, which refers to the way this sporty electric vehicle can interact with its driver. No, the car won’t be talking to you like the car from that 80s TV show. We’re not quite sure how that interaction happens, but we’ll let them cook it out before we judge.

What’s really interesting about the car, though, is the exterior, which has been fitted with 240 fully-customizable E-Ink panels, each of which can display 32 different colors. Not only can you use those panels to change the color of your car, you can also use them to display all sorts of custom graphics, allowing for some crazy customization. It also gets a HUD that encompasses the entire width of the windshield, which, we’re guessing, is where most of the aforementioned interaction will take place. 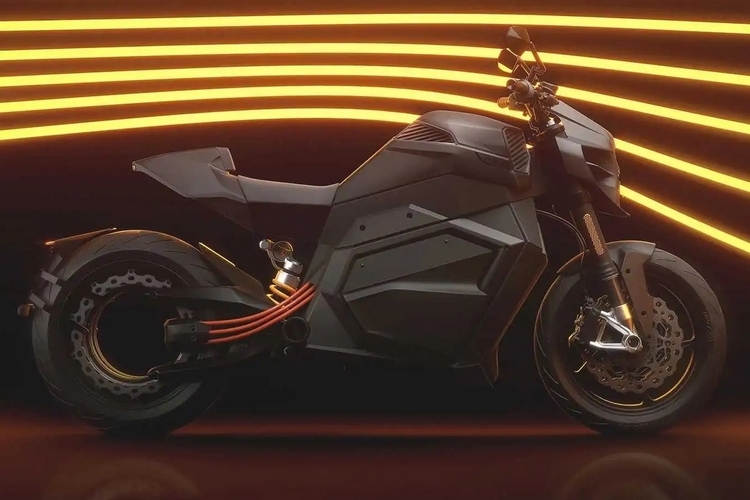 Arguably the coolest two-wheel vehicle on the entire CES floor, this electric motorcycle is fitted with an electric motor that puts out a whopping 201 horsepower and 885 pound-feet of torque. Yes, that’s a heck of a lot of power, allowing the bike to go from standstill to 60 mph in 2.5 seconds and hit top speeds of 124 mph, while the onboard battery keeps it running for up to 233 miles between charges.

It has striking lines that look just as aggressive as the sportiest bikes available today, but the hubless rear wheel is easily the coolest part of the whole thing. Even more impressive, the rim on that hubless rear wheel actually houses the motor, giving the bike a lower center of gravity while leaving a lot of room in the frame to accommodate a generously-sized battery. This is the flagship model of the outfit’s TS line, by the way, so if the $44,900 price tag is a bit too rich for your blood, you can check out two other more affordable models (TS and TS Pro). 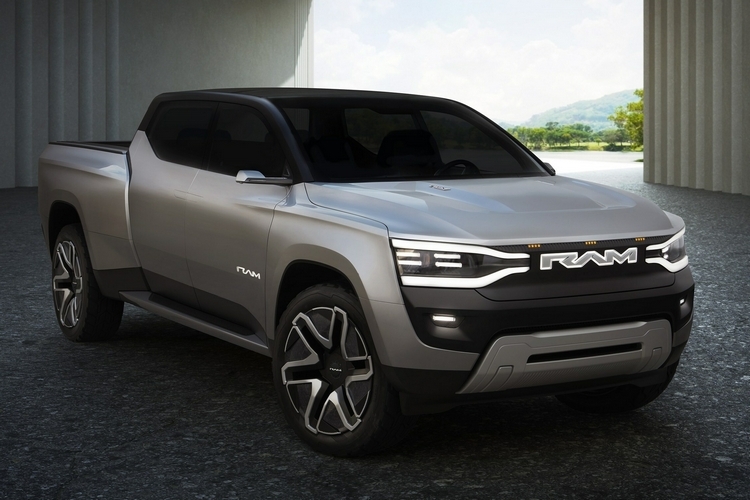 If you thought about getting an EV, but can’t find one that satisfies your need for a big and burly pickup truck, maybe this vehicle will be the one to get you over the hump. A full-size electric pickup, the ride brings the long wheelbase, chunky tires, and hulking size most people look for in their trucks, albeit with an unspecified dual-motor powertrain feeding its all-wheel drive. No word on range, either, but from looking at this thing, it just might be the perfect first electric vehicle for all the hootin’, tootin’ truck devotees out there. 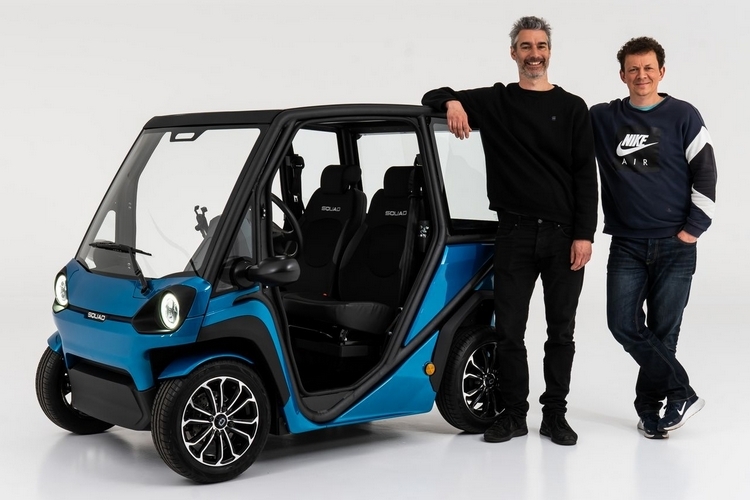 Yes, it looks like a golf cart, but the Squad actually appears to fall under the category of mopeds. That means you can drive and park it anywhere mopeds are allowed, making it a viable transport option for city commutes. The “car” is powered by a pair of two-kilowatt in-wheel motors that power it to top speeds of 28 mph. So yeah… it’s a golf cart that you can drive on the road. It uses 1.6kWh battery modules, up to four of which can be fitted inside the vehicle. It can get 31 miles’ worth of range with two batteries onboard and 62 miles if you max out all four slots. The batteries are hot-swappable, too, so you can keep backups in tow if you plan to be on the road for a bit. As you probably guessed, this is designed for the EU, but with plans to expand to other countries shortly after. 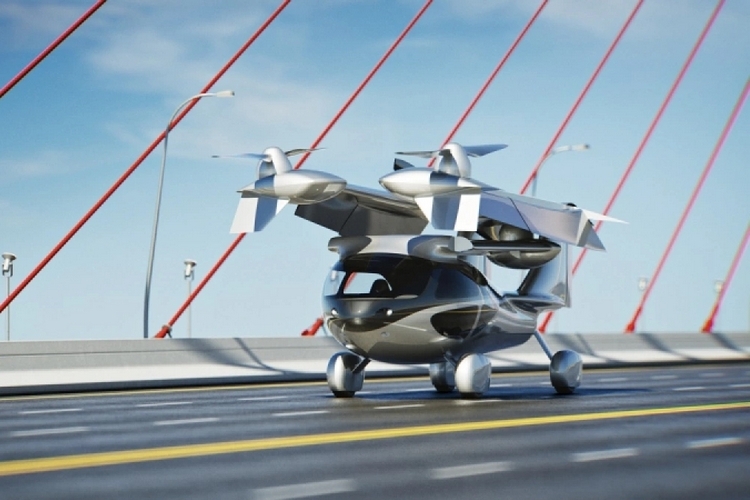 Every few years, we’d hear about a flying car startup that makes it sound like they’re just a short while away from going to production. Then, we’d never hear about them again. Of course, CES 2023 has a flying car in the show in the form of the Aska A5, a four-seat EV that can drive on the road and fly across the skies with equal aplomb. In car mode, the wings fold in on top of the vehicle, allowing it to fit inside a single driving lane; in flight mode, the wings deploy to each side, freeing the four propellers to power the car for a vertical takeoff. According to the outfit, it can fly at a maximum speed of 150 mph and travel 250 miles on a single charge. The flying car is slated to cost $789,000, with a planned 2026 release date. 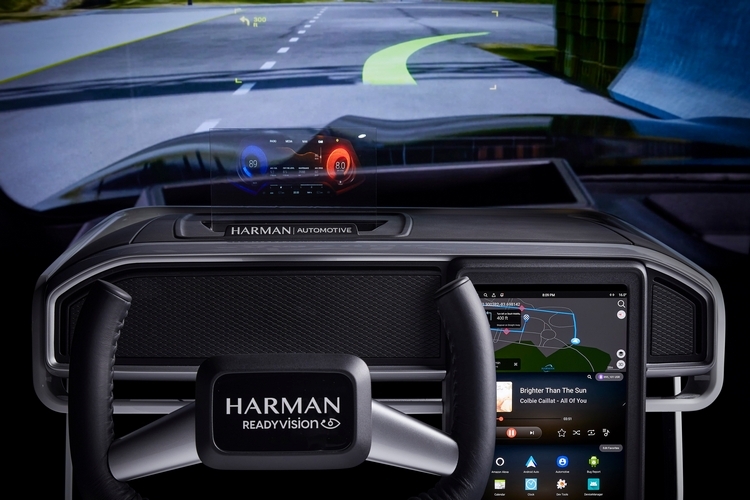 Why put multiple screens in your car when you can use the windshield as a giant screen? That’s the idea behind many HUD solutions being primed for future vehicles and that’s definitely what Harman is doing with this Augmented Reality HUD. The device, basically, projects images onto the windshield from its position on top of the dash, allowing you to see turn-by-turn instructions, vehicle warnings, and other important information without taking your eyes off the road. The device will go into production this spring, after which you can probably expect to see it pre-installed in some new car models. 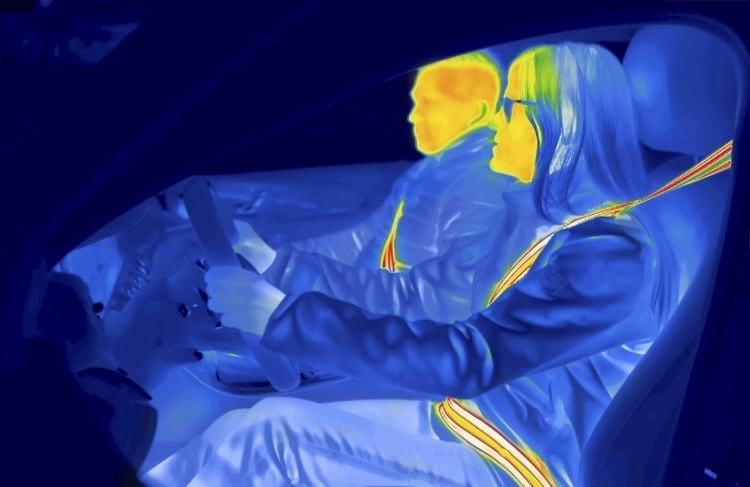 This seat belt is fitted with heating conductors right in its webbing, allowing it to heat up to toasty temperatures without affecting the seat belt’s traditional functions. According to the outfit, it can quickly go between 96 degrees and 104 degrees Fahrenheit in conjunction with the heated seats to keep the vehicle occupants warm and comfortable. Adding heat belts as a heat source can also potentially reduce the energy needed to heat the cabin, which, the outfit claims, could result in a range gain of up to 15 percent for EVs. Yeah, we think that’s a bit optimistic, but you never know.