The Coolest Retro Gaming Consoles You Can Buy In 2019 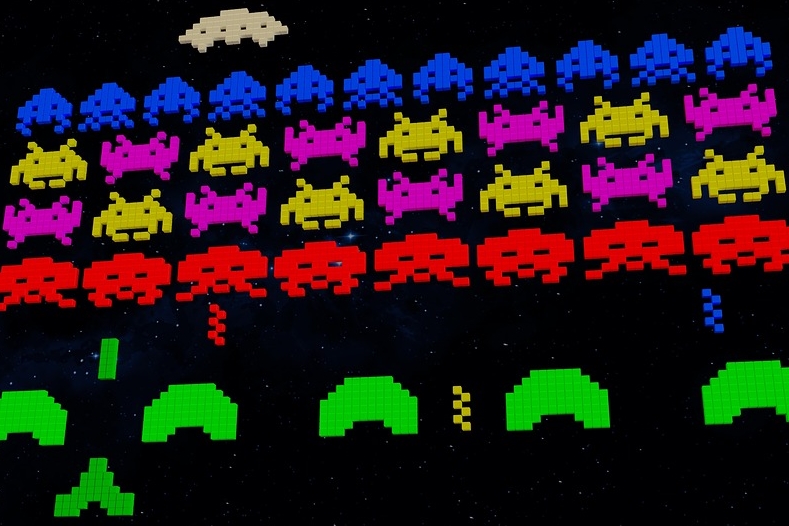 We’ve seen plenty of products run retro games before, from handheld devices to living room machines designed for new HDTVs. However, it wasn’t until Nintendo dropped the NES Classic that we saw all the big names really look to capitalize on people’s interest in video games of old. Simply put, there are a ton of them now.

The good news? It means, you have plenty of choices in retro gaming rigs, whether you’re an old gamer looking to relive your childhood or a young bloke wanting to experience those simpler days for the first time. The bad news? You can’t possibly buy all of them, right? If you’re like most people, you’ll have to pick and choose. Hopefully, this guide helps you with that.

We’ll start with, arguably, the two most important releases in the current retro console revival. You know, Nintendo’s miniature versions of their classic devices. They’re the most important, partly, because they’re two of the best consoles you can pick up in the existing retro lineup. Mostly, though, it’s because they’re the ones that really started the trend. 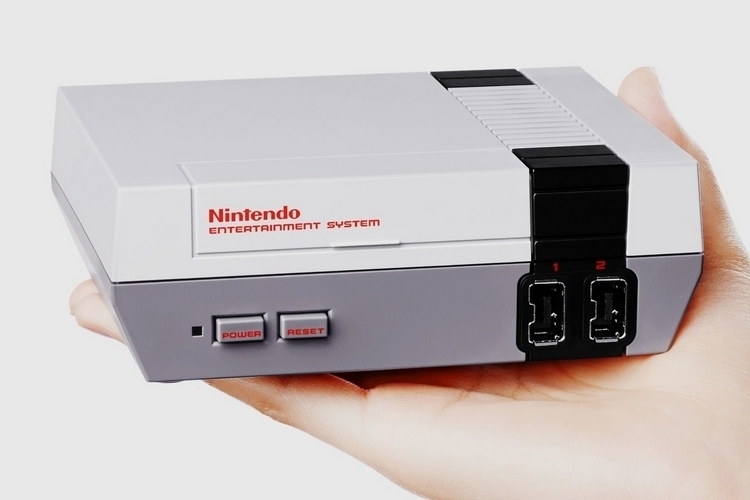 The console that started this retro gaming craze, the NES Classic combines an impeccably adorable design with 30 preloaded games, allowing you to relive the heyday of 8-bit gaming on titles like Super Mario Bros, The Legend of Zelda, and Metroid. While there’s no infrastructure for buying new games that you can add on to the console (a missed opportunity, really), loading ROMs via a USB stick is easy enough and that’s exactly what a good load of the console’s owners have been doing, essentially turning it into an 8-bit emulator for enjoying 80s games right in the living room. 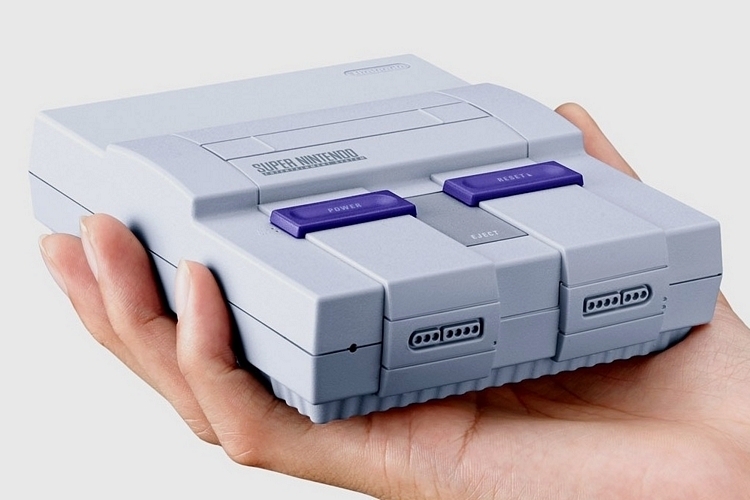 With the NES Classic’s sell-out success, Nintendo’s 16-bit console was certain to be revived, too, and it did not disappoint. Arguably the best retro console of the current crop, this beautifully-crafted machine comes with 21 SNES games, including Super Mario Kart, Mega Max X, and Street Fighter 2 Turbo. Since it’s their second time releasing a retro console, Nintendo took their time here, offering multiple display options, a selection of new functions (built-in save and rewind, for instance), and a few Easter eggs scattered throughout that should offer additional sources of joy for die-hard retro fans. And yes, people have figured out how to play ROMs on it, too, so there’s that.

Before the NES Classic was even an idea someone at Nintendo HQ came up with, the Analogue NT showed up back in 2014, taking retro gaming more seriously than anyone before it. Truth be told, we thought it was an overpriced NES clone the first time we saw it. Since then, though, Analogue’s line up has become one of the most important among retro gaming community. 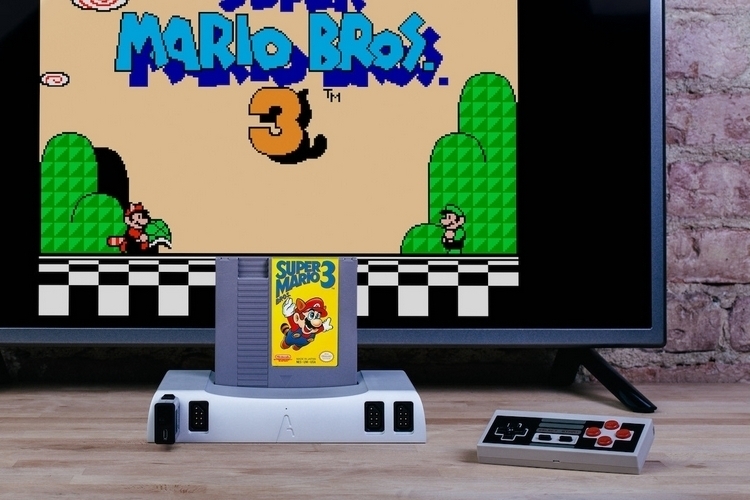 The NT Mini is that original console’s eventual successor, bringing retro fans an exquisite all-aluminum build, rescaled 1080p graphics, and 48KHz 16-bit stereo audio. More importantly, it didn’t run ROMs like most machines out there, instead sporting a slot that worked with NES, Famicom, and Famicom Disk System cartridges, giving retro gaming purists a machine to absolutely geek out on. 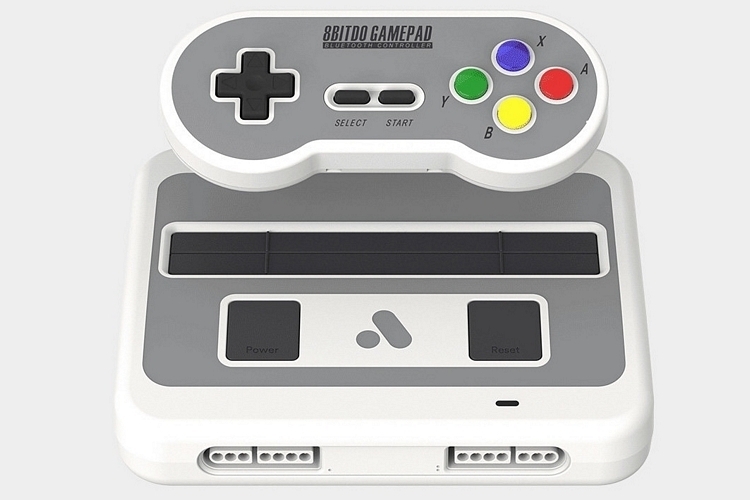 Billed as “the definitive way to explore Nintendo’s 16-bit era,” the SNES clone plays Super NES cartridges in native fashion, rendering it in 1080p 60fps with zero lag with 16-bit 48KHz stereo sound. It comes with a wired gamepad, although it’s compatible with 8Bitdo’s wireless SN30 controller, allowing you to enjoy your gameplay completely untethered. Don’t want your retro games looking your modern games? Not a problem, as it comes with multiple display options, from resolution (480p, 720p, and 1080p) and aspect ratio to scanline options and stretch adjustments. Suffice to say, it’s better, newer version of the Super NES and there’s nothing else like it. 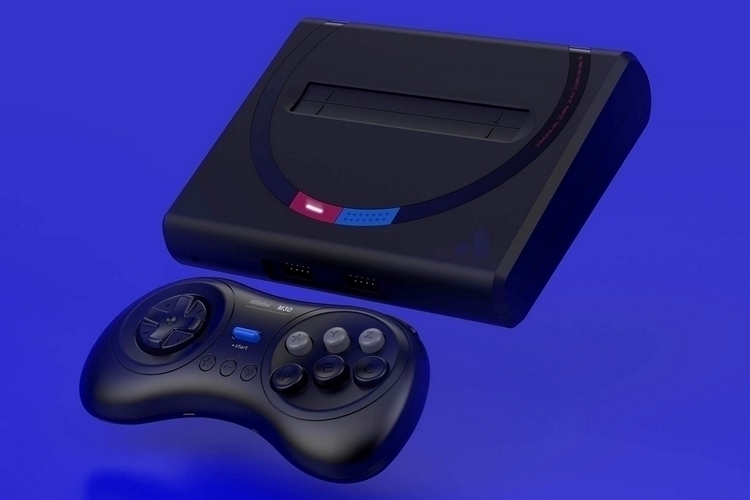 Like their previous machines, this SEGA clone uses an FPGA chip, allowing it to play erstwhile 8-bit and 16-bit games in 1080p graphics with zero lag. More importantly, it takes cartridges for SEGA Genesis, SEGA Mega-Drive, and SEGA Master System out of the box, with added support for Mark III, Game Gear, Sega MyCard, SG-1000, & SC-3000, although you’ll have to buy separate cartridge adapters for all of the latter platforms. It doesn’t come with a controller, by the way, so you have to order compatible gamepads either from Retro-Bit or 8Bitdo. 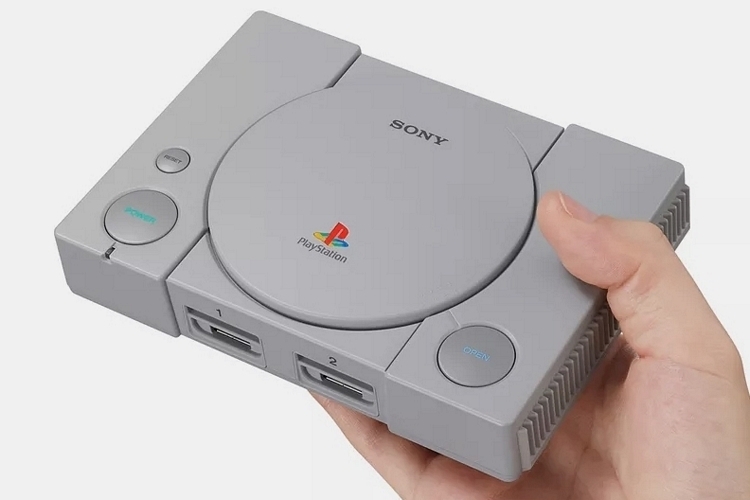 The first game console to sell 100 million units gets its much-deserved revival in compact form, recreating every element of the original, from the wide profile and CD slot to the oversized buttons and the classic controller. Seriously, it’s like owning the original, albeit in a smaller form with a non-functional CD chamber. With only 20 games onboard, the experience can feel a little bit lacking, especially if you have some great memories with games on the platform. With that said, they did throw on some of the most memorable games in there, including Final Fantasy VII, Tekken 3, and Ridge Racer Type 4. Suffice to say, it’s a worthy purchase, especially for longtime gaming fans. 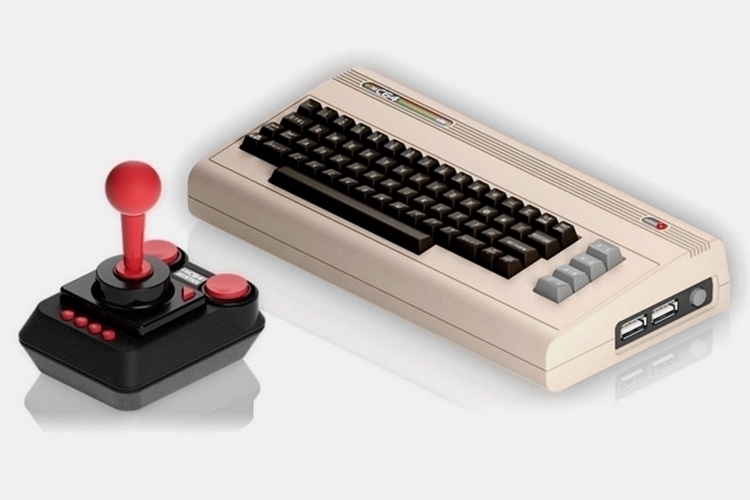 A modern reboot of the Commodore 64, this machine recreates the original’s keyboard form factor, albeit with non-functional keys, so you can’t use them to play retro games the way you play modern games on the PC. Instead, you’ll be playing the preloaded games using a bright red joystick, similar to the ones old-timers used back in the day. You can use that joystick to play any of 64 preloaded tiles, which include California Games, Impossible Mission, and Monty Mole. Sadly, it skips out on a few classic titles (Skate or Die, Bubble Bobble, and Ultima, for instance), but a good chunk of the onboard games are good enough that you probably won’t mind. 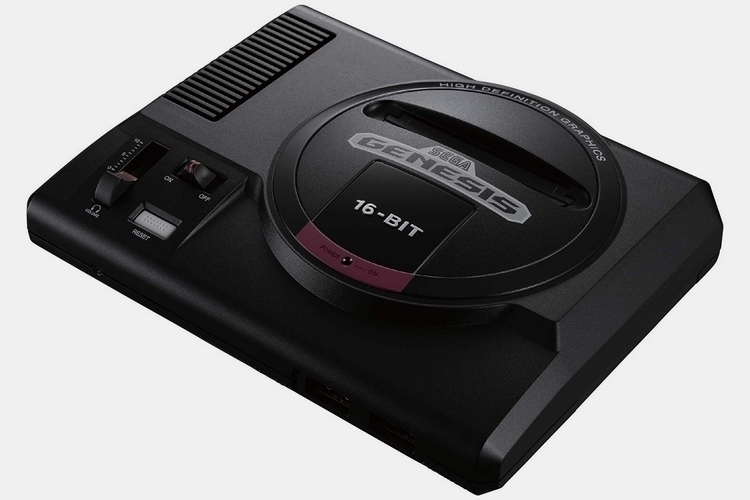 While there have been SEGA-branded retro consoles before, they were all licensed products from third parties, which meant the outfit had nothing to do with overall quality. The Genesis Mini, though, is an actual SEGA product and it shows, as it’s both thoughtfully-designed and beautifully-crafted. It’s loaded with a generous amount of games, too, coming with 42 different titles, including classics such as Sonic the Hedgehog, Earthworm Jim, and Gunstar Heroes. 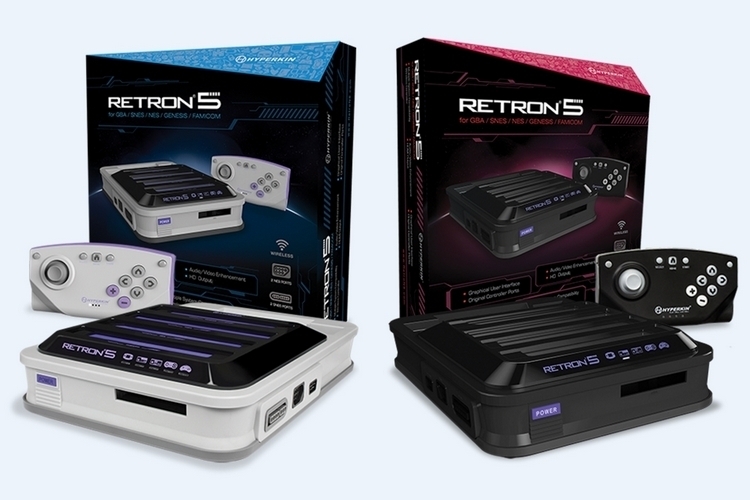 While Analogue’s retro consoles can play cartridges from one type of system, this veritable all-in-one plays all cartridges from nearly every important legacy system from the 80s and 90s. Specifically, it has five cartridge slots that allow it to play games from the NES, Famicom, SNES, Super Famicom, Genesis, Mega Drive, Game Boy, Game Boy Color, and Game Boy Advance. Unlike Analogue, though, this one doesn’t use an FPGA chip, instead turning the games into ROMs and processing them much like a traditional emulator. That means, neither the graphics nor the audio will be as good, but if you enjoy playing retro games on emulators, the experience should be very familiar. It outputs to 1080p for enjoying on your living room TV, all while being compatible with controllers for all the different consoles it supports (it has six slots – two of each kind). 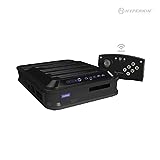 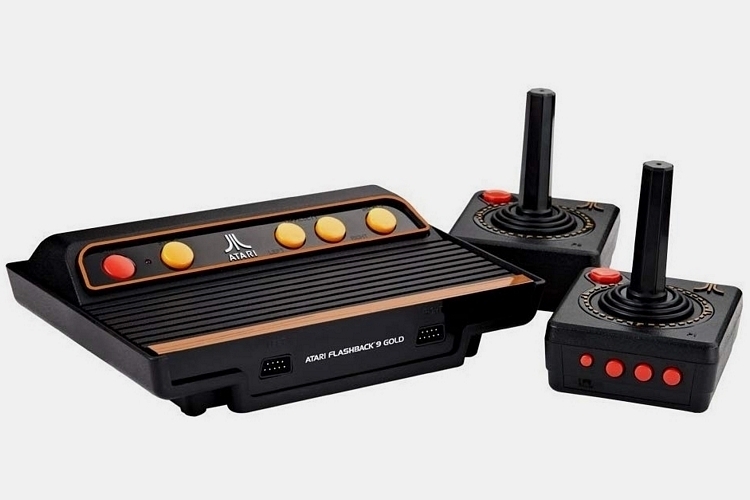 AtGames’ version of the Atari 2600, this home console lets you relive the nascent days of gaming in the early 80s, complete with upscaled 720p graphics, so the erstwhile simple graphics of the time can look somewhat decent in your 55-inch living room TV. It comes with two wireless joystick controllers, so you can play the games they were meant to be, all without being tethered with annoying cables. Sadly, though, no paddles are included, although it should be compatible with any paddle for the original console. A total of 120 games are onboard, from Frogger and Pitfall to River Raid and Keystone Kapers, along with nearly every paddle game from the original 2600 (which makes the exclusion of paddle controllers a really strange decision). 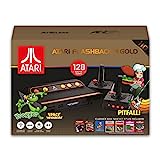 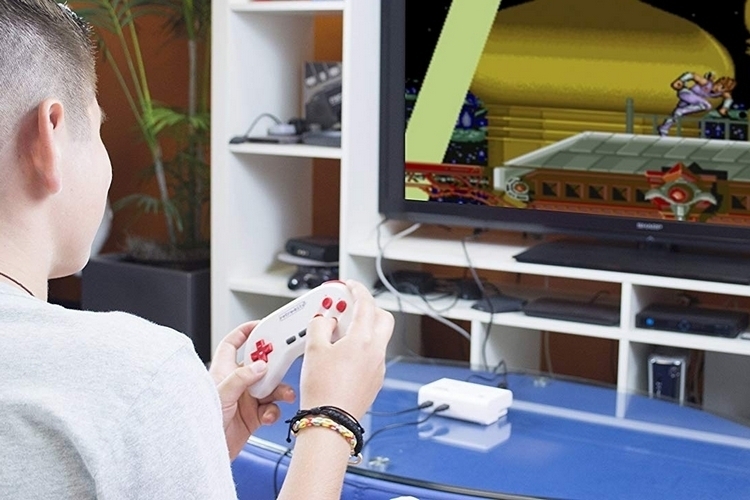 A no-frills emulator-based retro console, Retro-Bit’s gaming rig combines officially-licensed ROMs from the NES, Super NES, and SEGA Genesis libraries, along with several dozen coin-op arcade titles from Capcom, Data East, Irem, and Technos. A total of 90 games are onboard, including console classics like Mega-Man, Super Ghouls ‘n Ghosts, and Street Fighter 2010, as well as arcade hall favorites such as Double Dragon, 1942, and Captain Commando. It has 720p video output for viewing nicely on modern TVs, as well as an RCA connector for hooking up to older TVs, so you can play like it’s 1988 all over again. 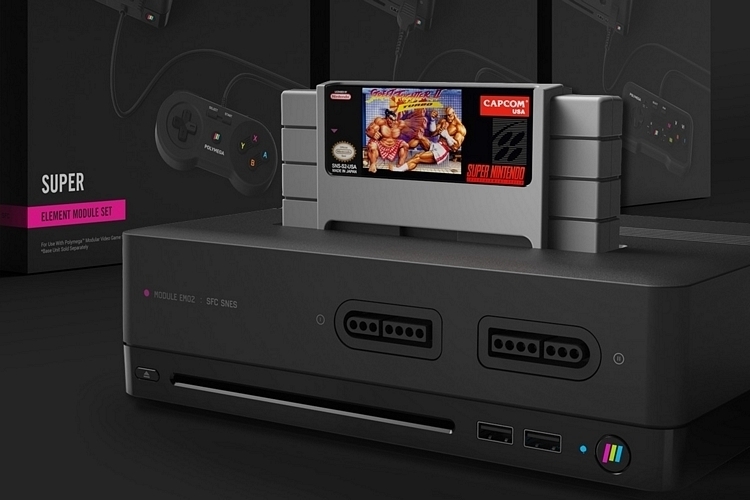 Arguably, the most ambitious retro gaming console you’ll see this year, the Polymega is an all-in-one emulator machine that can play games from 30 compatible legacy systems. We know, that sounds a little too much, but it’s also real, as the system can support all the regional versions for any compatible console. That console list includes the Playstation, SEGA Saturn, SEGA Genesis, SEGA Genesis 32X, SEGA CD, TurboGrafx 16, TurboGrafx CD, Super Arcade, SuperGrafx, NeoGeo CD, NES, and Super NES.  It can accept all the supported systems’ cartridges and CDs, any games from which it can automatically rip and save to its 32GB of onboard storage, so you can keep your original copies on the display shelf, instead of reaching for them every time.  An online storefront allows you to buy and download games from any of the supported systems, too, bringing the convenience of modern storefronts to your retro gaming predilections. It ships end of summer, priced at $299 for the base version (supports PS1, Neo Geo CD, TurboGrafx CD, SEGA Saturn, and SEGA CD) and $649 for the full set (supports all the listed consoles above).