The Coolest TVs And Monitors At CES 2023 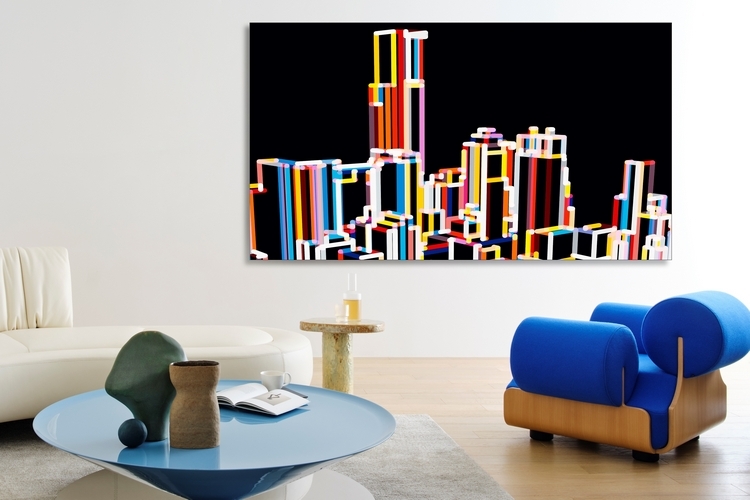 Every year, the Consumer Electronics Show (CES) serves as a showcase for the upcoming cluster of new TVs, monitors, and other display technologies. This year, of course, is no different, with companies looking to push the boundaries of consumer displays as we know them. From ridiculous 8K definition panels and completely wireless TVs to panels that can be stuck onto your windows and giant monitors that will supercharge your productivity to the cutting-edge in screen innovations, the CES floor is a veritable buffet of displays that can change the game for home entertainment and office productivity alike.

These are the coolest TVs and monitors at CES 2023. 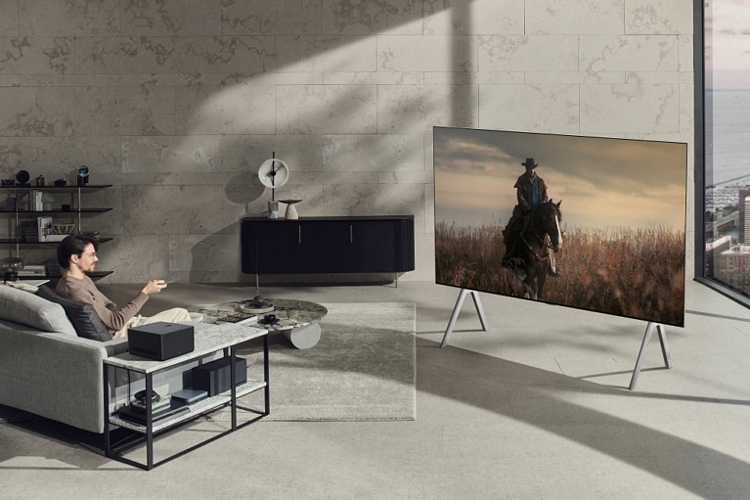 While it’s not completely wireless as it still uses a power cord, LG’s new 97-inch 4K TV ditches everything else. That’s right, there are no ports on the darn thing, so you can’t just plug in your PS5 in the back for some console gaming. So how do you game, watch Blu-ray movies, or hook up wired video sources? It comes with an external receiver box with all the ports you need and that’s where you plug in any device you want to use with the TV. Just keep the box in the same room as the TV to have it wirelessly transmit all audio and video to the panel. According to LG, the box can transmit up to 4K at 120Hz from distances of up to 30 feet away. 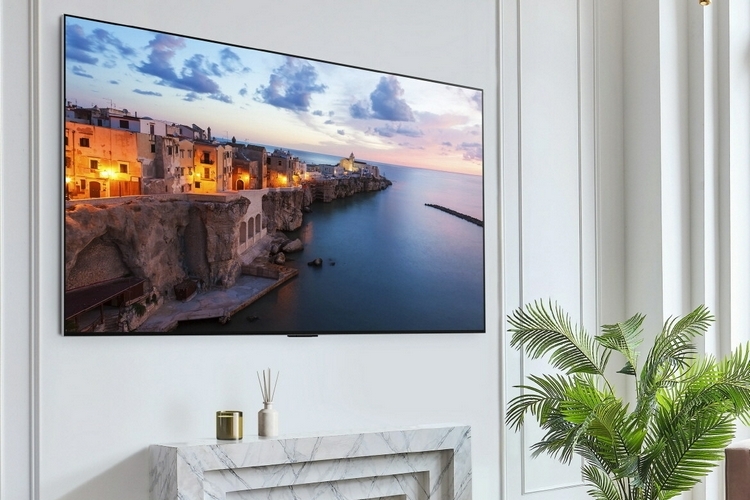 The newest model in LG’s Gallery Series, the TV uses a brand new light control architecture and light-boosting algorithms to deliver a 70 percent brighter picture, resulting in sharper, more realistic images. LG claims the onboard AI now produces better picture upscaling, automatic refinement of important objects in the scene, and enhanced dynamic tone mapping, among other fine-tuning functions. It boasts an ultra-slim frame that’s designed to push flush against the wall, leaving no visible gap when wall-mounted, making it look more like a display frame than a TV panel. The G3 is available in 55-, 65-, and 75-inch sizes. 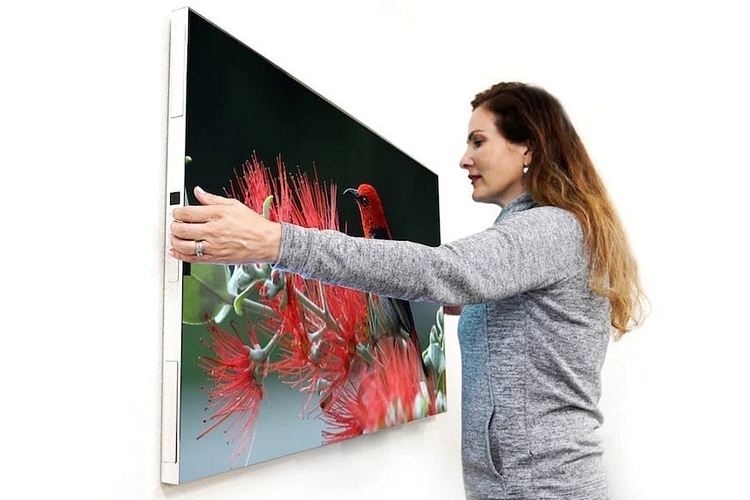 Easily the most unique TV in the entire show floor, this completely wireless 55-inch panel eliminates the power cord by using hot-swappable batteries, so you simply charge whichever batteries you’re not currently using and swap them in as soon as the charge on your TV starts getting low. There are no ports either, so you’ll have to rely on wireless protocols if you want to put content from your devices onto the panel.

Despite having batteries, it manages to stay reasonably lightweight enough that you don’t need to mount it to a wall using screws. Instead, the back of the TV is fitted with active-loop vacuum modules that you can use to just stick the TV onto any flat surface.  If 55 inches of display real estate isn’t big enough for your TV needs, by the way, you can snap four of these TVs together and have them function as a single 110-inch TV with 8K resolution.  In case that still isn’t big enough, it supports snapping up to 16 panels to create a single 220-inch TV with 16K resolution. Yes, it’s absolutely, stupidly bonkers. 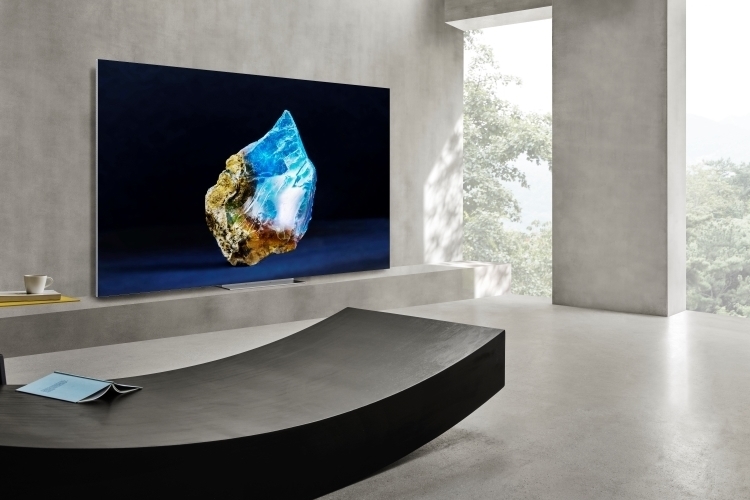 Want a microLED TV, but can’t quite get over how expensive they are? Maybe Samsung’s newest 76-inch micro-LED panel can finally land you one, as it’s supposedly the most affordable microLED TV to date. And yes, it will likely get even more affordable as the year progresses, as they will also release it in smaller 63- and 50-inch models. Why are microLED TVs so expensive anyway? Mostly because they use sapphires to make each of the tiny LEDs and these 4K TVs have a ton of them, since each individual pixel corresponds to one microLED unit. TV specs include a 240Hz refresh rate, two nanoseconds response time, a black level depth of 20 bits, and a 99.9 percent screen-to-body ratio, making the whole thing look entirely bezel-free. 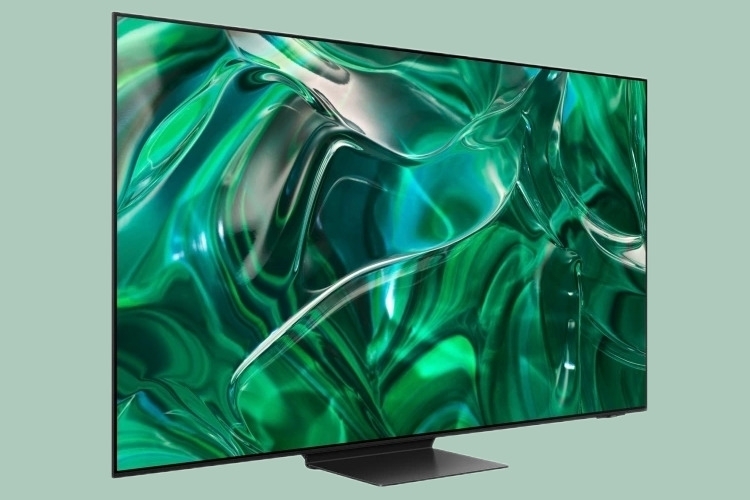 The latest addition to Samsung’s QD-OLED lineup, the 77-inch S95C model comes with 2,000 nits of brightness, a 144Hz refresh rate, and a 70-watt 4.2.2-channel Dolby Atmos speaker. They also threw in AMD’s FreeSync Premium Pro and 0.1-millisecond response time, which means it’s going to make for one heck of a console gaming panel. Like other TVs that combine OLED with the outfit’s Quantum Dot system, it should deliver the best of both technologies, so you get to enjoy OLED’s superb contrast, detail, and viewing angles along with QLED’s superior colors. Design-wise, it’s slimmer than the outgoing S95B model at just 10mm thick and comes with the OneConnect box, a single external enclosure where you can connect all your devices, so you only need to minimize the wires coming out behind the TV. 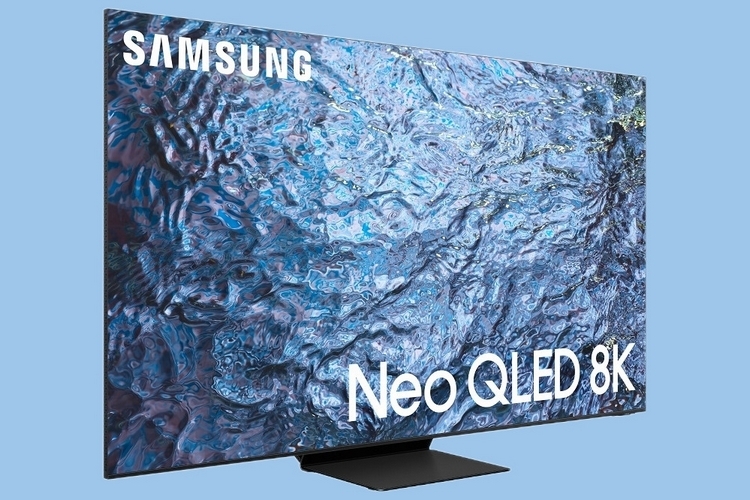 Samsung brought the next generation of QLED TVs to the show floor in Vegas and the QN900C is the best of the lot. It’s an 8K panel powered by the outfit’s Neural Quantum Processor, giving it plenty of real-time picture correction features, including AI upscaling, shape adaptive light control, and auto-HDR remastering. If an 8K TV is too much for your needs, they also have a 4K model called Neo QLED QN95. 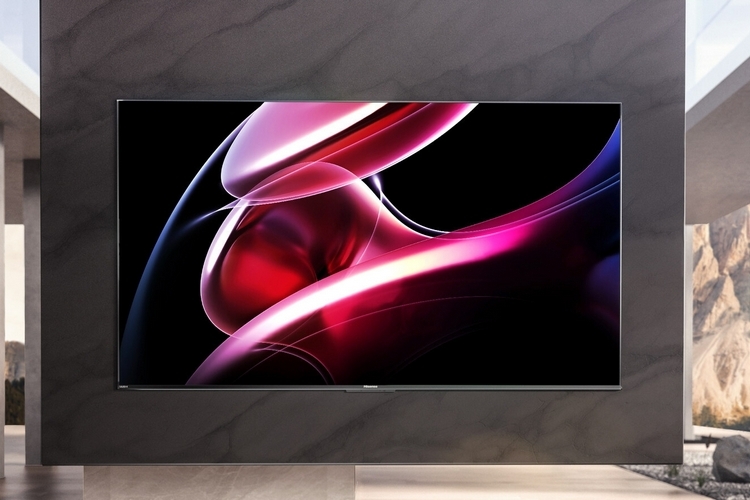 Hisense’s newest flagship panel, the 85-inch ULED X, features the outfit’s newest mini-LED backlight system, which gives it 5,000 individual dimming zones, resulting in three times the environmental contrast and two times the dynamic range of OLED TV. It has a peak brightness of 2,500 nits, a 16-bit light control algorithm, and a 150,000: 1 contrast ratio. More than a stage to show a pretty picture, the TV also comes with an 80-watt 4.1.2-channel sound system to ensure an overall elevated viewing experience. 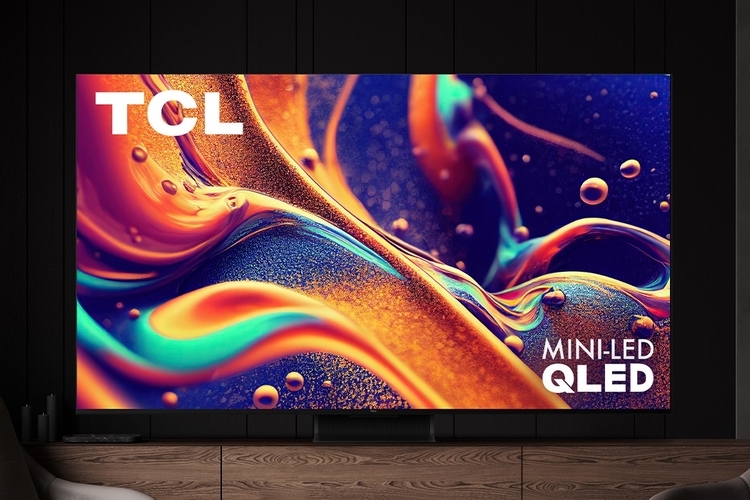 If you’re like us, you were looking forward to the newest additions to TCL’s Series 6 line, which has built a strong reputation in recent years for its excellent image quality and mid-range pricing. Well, they didn’t have any new models before. Instead, they’re showing off this QM8 model, which, from what we can tell, takes the place of the Series 6.

A mini-LED TV, the 4K panel boasts 2,800 nits of brightness and 2,300 dimming zones in the biggest 98-inch model, along with 120Hz native framerate that you can double by activating the VRR feature. According to the outfit, the 98-inch QM8 is thinner than their 65-inch Series 6 from just a few years ago, making it a lot easier to mount all on your own. 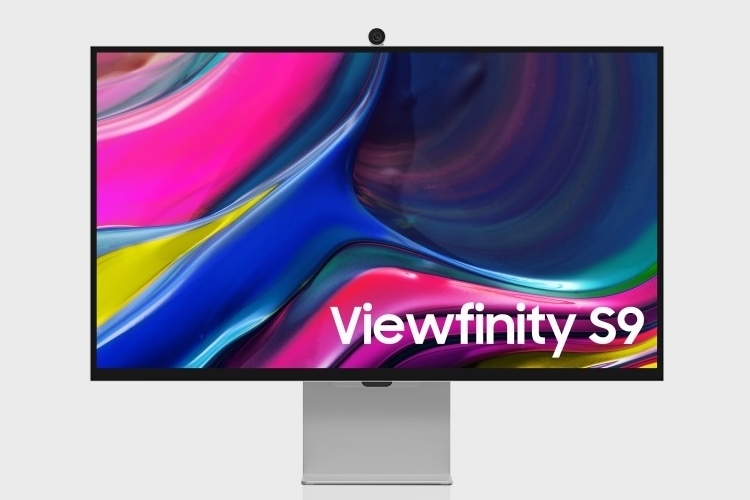 Samsung’s answer to the Apple Studio Display, this 27-inch 5K panel is optimized for creative professionals, such as artists, graphic designers, and photographers. It has a wide color gamut that covers 99 percent of the DCI-P3 color space, while a built-in Color Calibration Engine ensures your screen displays color and brightness accurately. While it’s a monitor not an all-in-one, it does come with Samsung Smart Hub onboard, so there are available apps you can use without having to connect a PC, including Google Meet for doing video calls using the integrated 4K SlimFit camera. It comes with both USB-C and Thunderbolt 4 ports. 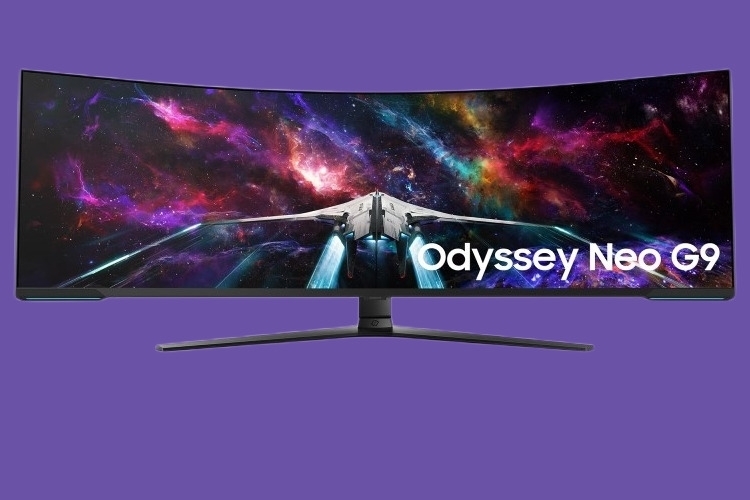 It can’t be CES without a ridiculous gaming monitor on the show floor. And it doesn’t get wilder than this ultrawide curved panel that Samsung calls a dual UHD monitor, which boasts a 7,680 x 2,160 resolution in a 32:9 aspect ratio, making it equivalent to a pair of 4K side by side 4K panels. The 57-inch display comes with a 1000R curvature, mini-LED backlighting, and VESA Display HDR 1000 support for vibrant and immersive pictures, while a 240Hz refresh rate allows you to put all of your GPU’s processing muscle to work. According to the outfit, it has DisplayPort 2.1 support, which boasts twice the data transfer speeds of the previous 1.4 version. 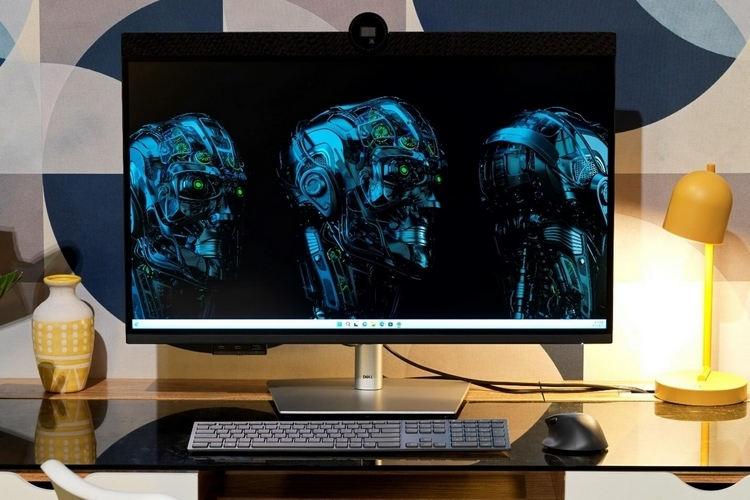 While Dell introduced a number of UltraSharp monitors at the show, this 32-inch 6K display is the clear standout. Equipped with IPS Black panel technology, it boasts higher contrast and deeper blacks than conventional IPS monitors, allowing it to showcase more depth for dark objects even in darker scenes, all while producing accurate colors from practically any angle. Designed for productivity, it comes with a built-in dual-gain HDR 4K webcam that’s equipped with auto-framing, automatic light adjustments, and a privacy shutter, along with dual 14W speakers, a pop-out port deck out front, and DisplayPort 2.1 support. 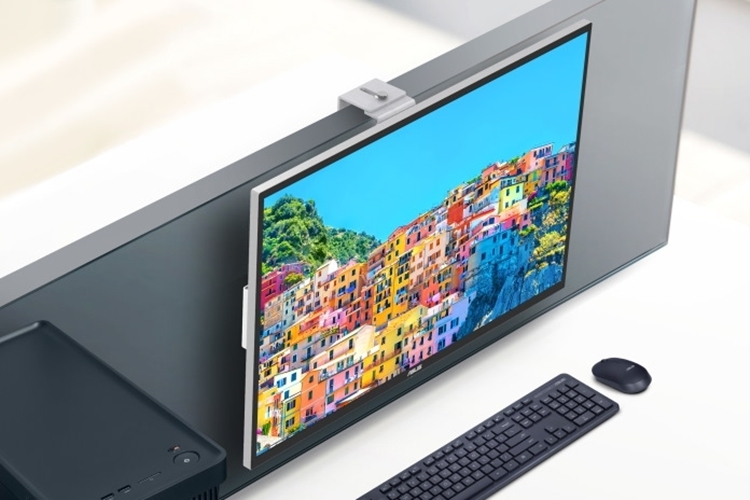 Designed for creative professionals, this 31.5-inch 4K monitor comes with a true RGB OLED panel that offers true 10-bit color, covering 99 percent of the cinema-grade DCI-P3 color gamut. ASUS equipped it with onboard hardware calibration for optimizing the color accuracy and color profile, while coming with bundled CMS tools for periodically checking the display’s accuracy over time. It’s a gorgeous panel, with slim lines and an overall clean design. There’s a unique bar that runs across the back (so it doesn’t support a VESA mount), allowing you to put it up horizontally or vertically up a wall, all while letting you hang it from a cubicle or using the included slim stand. Features include 700 nits of brightness, ultra-fast 0.1ms response time, two Thunderbolt 4 ports, one 90W power delivery USB-C port, and one 15W power deliver port.