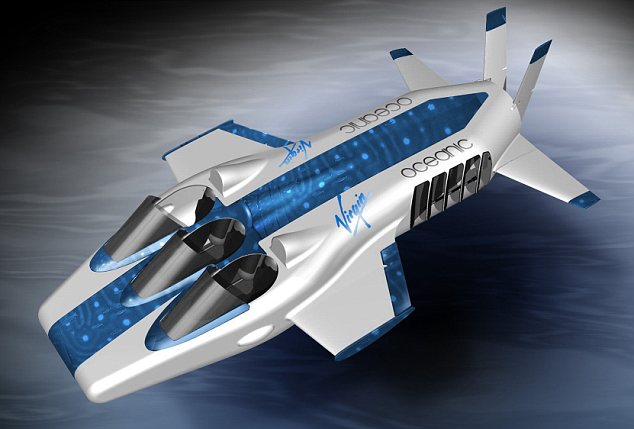 What cool new toy can a guy who owns a slew of gorgeous cars, an airline and a space shuttle get for 2010?  In billionaire Richard Branson’s case, as it turns out, it’s a £415,000 prototype submersible called the Necker Nymph, which is the first of its kind.

Dubbed as an “underwater plane,” it is said to literally glide on water like an aircraft and incorporates numerous fighter jet technology in its design.  Instead of using ballast to propel it like a normal sub, for instance, it has wings with downward “lift” that it uses to fly down up to depths of 135 feet.  It can also coast over reefs without hitting them (due to positive buoyancy) and perform swift 360-degree turns.

The Necker Nymph can ride three people (one pilot, two passengers) for up to two hours on a full tank.  Intended to safely extend the capabilities of scuba diving, it utilizes an open cockpit design (using clear, domed hulls) that affords those inside a 360-degree view of all the sights under the water.  Hawkes Ocean Technologies, the company who built the vehicle, claims that due to its low light and noise emissions, it allows passengers to descend into the ocean without disturbing the ecosystem, allowing you to witness marine life in its natural state.

Designed specifically to launch from Necker Belle, Branson’s 105-foot catamaran, the sub can be rented for the price of $25,000 for seven days, but only if you also rent the aforementioned boat ($88,000 for seven days).  When not in use by the luxury boat, the Necker Nymph can also be launched from the dock of Branson’s Necker Island resort, but you’ll have to arrange with them for the rates.