The PlayStation Vita Is The Next-Gen PSP 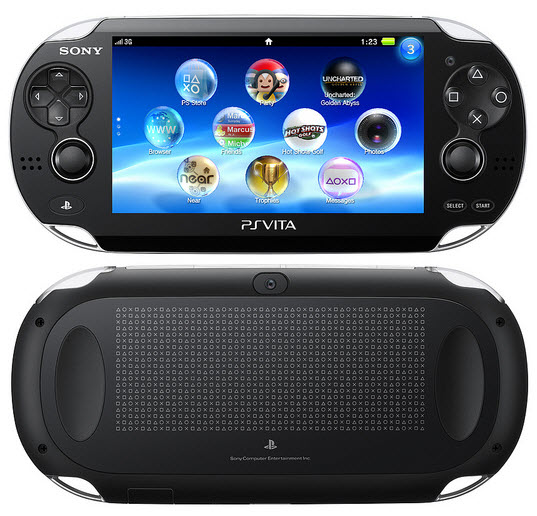 Sony finally pulled the wraps off its next-generation handheld console.  Called the Playstation Vita, the PSP successor literally crams a plethora of hardware, making for one mightily endowed gaming machine.

Ditching the slider design of the PSP Go, Sony returns to the classic PSP shape here — only sleeker.  It measures 182.0 x 18.6 x 83.5 mm, which is about the same size as the older PSP models, but is surprisingly light for the kind of hardware it packs (according to those getting hands-on time at E3).

The Playstation Vita brings Sony’s classic gaming controls on board:  a PS button, a d-pad, four action buttons, two shoulder buttons and two thumbsticks, along with the ubiquitous Start and Select.  Expect a lot more control options, though, since the screen is a multi-touch panel, there’s an extra capacitive touch pad in the rear and, like modern smartphones, it has a six-axis motion sensing system for less-traditional gameplay.  Oh, and lest we forget, the screen is a gorgeous 5-inch OLED panel, with 960 x 544 resolution and a 16:9 aspect ratio.

Other hardware details include a quad-core ARM Cortex A9 processor, an SGX543MP4+ GPU, front and rear cameras, GPS, WiFi, optional 3G and Bluetooth.  The powerful hardware and massive control options make for some crazy interactive gameplay — something Sony made sure to make full use of with the first-party titles they showed off at E3, like LittleBigPlanet, Uncharted: Golden Abyss, ModNation Racers, Ruin, Wipeout 2048 and more.

Suffice to say, the Playstation Vita is going to give anything Nintendo comes up with a serious run for the money.  Pricing is $249 for the WiFi-only version and $299 for the 3G, with availability expected at the end of the year.