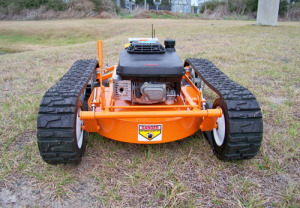 Every so often, a piece of technology appears that makes us wonder if we’ve stepped into the middle of a science fiction movie. Such things simply can not, perhaps should not, exist. Is the world ready for such stuff? Will the power of this  creation become too much for mankind? Ultimately, will the thrill of power corrupt the landscaper that for years has had to  push that lawnmower on his own?

I say we are ready. I have wanted a iRobot Roomba like version of an automatic lawnmower for a long time now. This one is not there yet but it could be quite fun cause its remote controlled.

Yes, we the people and off course Landscaper’s will be the ones that must determine how to contain the power of this new gadget, the  Evatech GOAT Robot 22T. Evatech understands the difficulties posed by more traditional lawnmowers. Hills are often an  insurmountable obstacle. It would be easier to take the weed eater out than risk a hard push, or worse, tipping over.

So you’ll be happy to learn that the GOAT Robot is like a mini tank mixed with an RC car, ready to attack any lawn. It can  take down any slope up to a 70 degree angle. The machine is remote controlled from a maximum distance of half a mile. And  this beast of a lawnmower can move at speeds of up to 8MPH, so you had better be ready with a plan for the rest of your day  when this beast eats up grass like a hungry hog. For those in colder climates, the GOAT also comes with a snowplow  attachment. You’ll never have to shovel your driveway again.

Perhaps we’re not ready for this kind of power, but the genie has been let out of the bottle, and landscapers across the  world are saying they are the better for it. For landscapers, and even the casual kid just trying to earn a few bucks, this  gadget is the superior lawnmower for the man that always wanted a little more power at his disposal while he cuts grass.