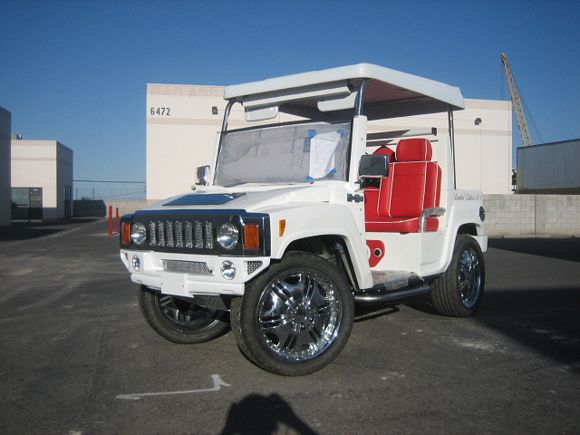 Golf carts are never bad ass.  Small, underpowered and geared for prancing around 18 holes, it’s normal for them to be fittingly understated.  Custom tuner Bad Ass Golf Carts don’t seem to think so, however, especially not after their latest creation.   Called The Royal Cart, the motorized golf course vehicle is clad like a shrunken version of a Hummer H3.

Rather than a beastly-looking cart, though, the tuned-out ride looks like a cartoon version of the mid-sized SUV – 18-inch wheels, hood vents, grille and other custom bodywork, notwithstanding.  Seriously, it’s the kind of Hummer that Spongebob Squarepants will be driving if they were angling for a product placement (apart from the fact that the cartoon version will need to run underwater). 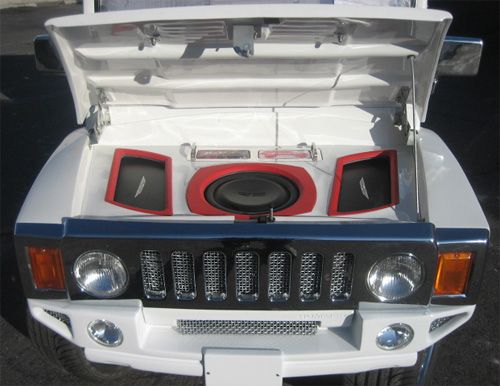 The drivetrain has been updated to a faster 35mph motor, ensuring your victory in the next golf cart race you participate in.  While that change was rather modest, the electronics isn’t.  Featuring  a sick sound system (two 12-inch woofers, three amps and three sets of Dynaudio 220V rig), five TVs, monitors on the headrests and visors, touchscreen controls and a DVD player, it’s a veritable entertainment center on wheels.

Not content, the crew even threw in remote control on everything (including the hood), a full security system (far as I can tell, machine guns aren’t part of the update) and club lighting, so you can party it up with other country club members.  Suffice to say, the list of custom additions is exhaustive – you can check the rest from the creator’s site (link below).

Naturally, a monstrosity like this isn’t for retail – especially not at the $55,000 price.  Instead, The Royal Cart is a custom project for a customer that plans to use it to scare off wildlife (or attract it, I’m not really sure) over at his private island.