The Scribble: A Self-Animating Doodle Pad 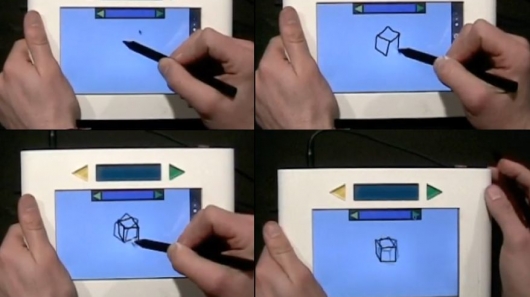 Doodle pads of all variants have been part of the toy landscape for a long time. The next wave of them, however, could be just like the Scribble, a dedicated drawing pad designed to let you produce animated sequences.

Created by a team of Art and Design students at the University of Michigan, the device lets you draw a succession of images and plays them back as sequential frames. Just like a flipbook without the paper. Or a Flash editor without a full-featured computer.

The Scribble takes a tablet form factor, with a display that you can draw on using a plastic-tip pen. Hardware for the prototype uses an EeePC’s guts, paired with a specially-ordered touchscreen. The case was modeled in Rhino and rapid prototyped using ABS plastic, with the software custom-written by the team.

You start each animation by drawing on the page onscreen and saving it. A new page with a grayscaled version of the previous image then appears on the second page (so you can use it for reference while drawing the next frame). And so on. Once you’ve drawn the whole strip, you can have the machine show the images one at a time in quick succession, creating the illusion of movement. All saved images are editable, so you can just dive right in and correct when you notice any part that needs to be changed. It also comes with a camera if you’d rather use the device to capture stop-motion film (you take one frame at a time, same as the drawing).

According to the team, which consists of Alexis Stepanek, Ryan Thurmer, Chris Parker and Penn Greene, they came up with the Scribble after surveying a focus group of Grade 3 students about fun toys and enjoyable activities. I reckon, being able to make their own cartoons probably showed up somewhere near the top of everyone’s list.

[Univ of Michigan via Gizmag]