The Whike: Assisted Cycling With Sails 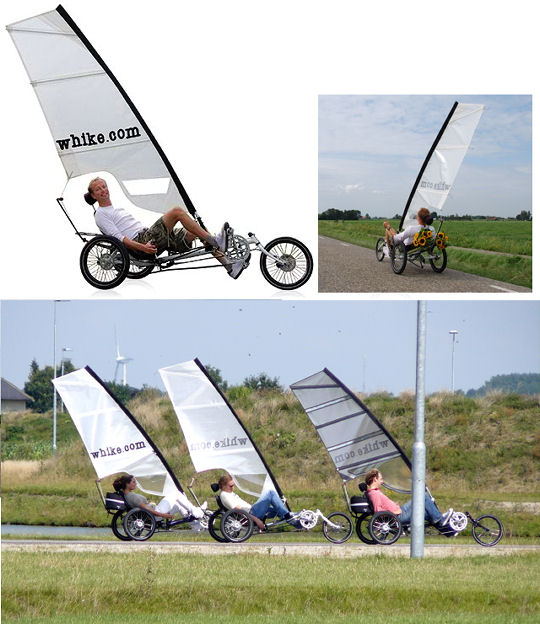 Over the last few years, electric motors have seen increased use in bicycles to allow for added speed on the road.  The Whike takes the same assisted cycling concept but uses a sail instead of an electric motor to help propel you forward.

Widely embraced by environmentally-conscious folks for providing the same speed benefits of electric bikes without the battery use, the Whike is finding an increasing audience among thrill-riders as well.  With the sails up during good winds, after all, the nature-powered vehicle lets you sail on the road at speeds of up to 50 kph.

Purported as a street legal (depending on where you live, most likely) and safe way of transport, the Whike is a three-wheeled recumbent bike with a 1.6 square meter, 3-batten sail.  The sail can be folded up for pure pedal-powered driving or rolled out for a wind-assisted ride.  It weighs 19 kg and sports 40/65 cranks, an 18-speed gear and a Shimano Deore derailer with ultegra shifters.

It requires driving by an adult weighing at least 65 kg to provide adequate resistance against strong gushes of wind.  For safety purposes, all three wheels come equipped with individual disk brakes.  When you hit the front brake, it releases the spinlock, causing the sail to stop helping the bike go forward.  Under very strong winds, the manufacturer advises to take down the sail and go on a pure pedal drive instead to avoid losing control.  Knowing the kind of spirited folks who’ll be drawn to a ride like this, however, I’m pretty sure we’ll see it get pushed to extreme limits.

As with most performance bikes, the Whike doesn’t come cheap – it’s currently selling for around 3,000 Euros.  While the reckless daredevils in the product picture above refused to don a helmet, we highly suggest you spring for one, especially if you plan to use it in a windy part of town.