The Wii Gets Showered In Gold, Bestowed Upon The Queen 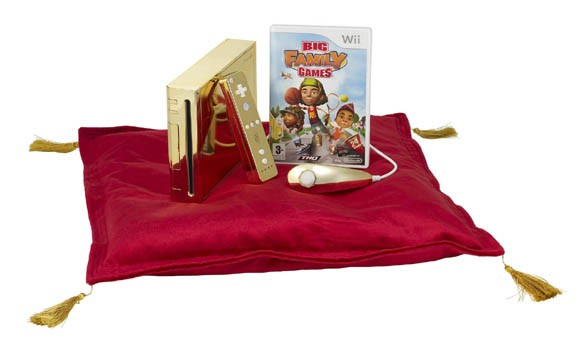 Though it doesn’t play any better than the regular variety, a gold-plated Wii sure looks a heck of a lot more eye-catching than the plain vanilla console next to my TV at home.  Bestowed upon her Majesty, the Queen of England, the gesture comes as part of THQ’s promotional campaign for the upcoming Big Family Games.

Blindingly shiny, the Royal Family Edition Wii (we just made that up) looks like a standard bundle, with both a similarly gold-clad Wiimote and nunchuck.  If I were the Queen, I’d be offended – I so deserve more than gold-plating and commoner features.  “Banish those offending game publishers from my midst,” I would have commanded with a dismissive wave.  Then, I’d levy a heavy tax on their families for the rest of the year, so that everyone understands that the Queen cannot be appeased by a mere gold-plating.

Lucky for THQ, all they seem to have gotten so far is a quiet response.

Big Family Games, which came with the shamelessly promotional bundle is being touted as the “ultimate” Wii title for the whole family, from the oldest grandparents (at 83, Queen Elizabeth II probably does fall into the “oldest” demographic) to the youngest kids.  Seriously, though, I can’t imagine her Majesty ever engaging in such plebeian pursuits.

Also check out these deals available on Wii bundles