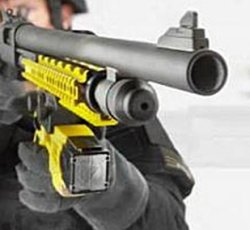 So you’re walking home from work. You’ve got almost everything important to you in your pocket: wallet, cash, ID, cell phone. To you, their just the seemingly meaningless possessions that make up your life. But to a mugger, they’re profit. They’ll come after you to take what’s yours, and when that happens you had better be sure you have a way of defending yourself.

Good thing the robber didn’t notice the stun gun affixed to your back, right? And good thing he didn’t notice that you’re a trained marksman, that you saw him tailing you from half a mile back, and when you turned into that dark alley you knew he would follow you. Now that he’s come after you, instead he finds you’re behind him, the gun trained on him…. Okay, so it looks like you haven’t bought the gun yet, so before the above happens, let me tell you about it.

What you’re looking at is the latest non-lethal weaponry, the Wireless X12 Taser LLS (Less Lethal Shotgun). The form is designed to look like a high-tech gun, but it’s ability to protect you doesn’t cause the same harm to your enemy. As the name describes, the gun delivers a non-lethal electrical charge that immobilizes a person through electrical impulses rather than the standard tazer method, which immobilizes through the use of pain. This little beauty is able to fire a charged round from up to 88 feet away and is strong enough to penetrate clothing.

In all seriousness, the weapon is the newest in a line of effective tools in hot demand by law enforcement officers. Until the gun is released in June, we can not even say if the gun will be available for the general public. As stated, their claim is that the gun paralyzes through a electrical impulses, not through conventional pain, but I doubt the sensation of enough voltage going through your body to paralyze you is going to feel as good as a gentle massage.