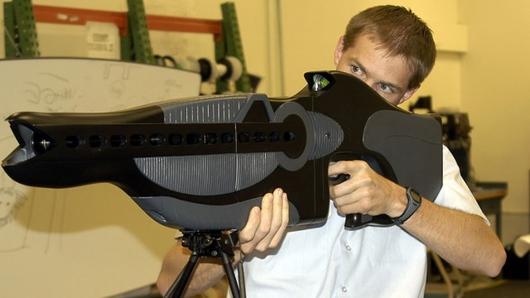 A fire hose usually does the trick when trying to keep a small crowd back without putting anyone in serious harm’s way.  However, the whole mess that water creates makes it largely unusable for indoor applications (such as when trying to control a disturbance inside a facility, for instance).  That’s where the Thermal Laser System, which keeps people from moving forward by creating heat sensation within a certain distance, comes in.  Unfortunately, it only works if the people are naked.

Since nudist colonies aren’t at the top of the list of people who need to be laser-gunned into backing off , the technology is currently being improved to successfully pierce through clothing.  Hit with the infrared laser sans threads, subjects will feel a painful burning sensation on the outer layer of their skin, all without causing any actual damage (at least, that’s the idea).

Currently under development by the U.S. Military, the extremely benign weapon attaches to the standard rail system on military rifles, making it more portable than similar heat-creating contraptions (like the PHaSR in the above picture).  No exact range has been specified yet, but it is expected to manage the effect over a considerable distance (like 50 feet or more).

The Thermal Laser Weapon is now undergoing field testing by the Joint Nonlethal Weapons Directorate (JNLWD), where it is proving to be even less dangerous than even tasers and impact rounds (both of which you’ll continue to suffer from for a good few minutes), since their effects are immediately reversible. Present configuration sends invisible rays onto the subjects, although future versions will likely have to be  visible, so the operators can see exactly what they’re hitting.