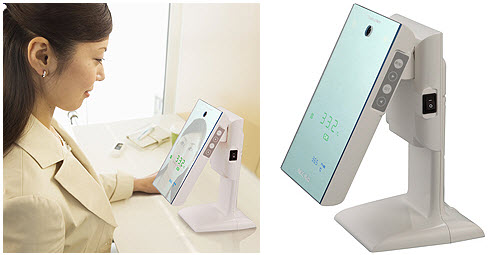 The Thermo Mirror might look like a small make-up mirror for getting a quick touch-up while you enter an office building’s lobby.  In truth, though, it’s already checking whether you’ve recently contracted a flu virus, so security can escort you out of the place and lock you in a containment facility underground (or maybe just take you to the local clinic).

Created by NEC Avio, the predecessor of the non-contact medical measurement device was originally developed in 2009 when a new type of flu appeared in Japan.  Airports and seaports were equipped with the contraptions, allowing them to test visitors for flu-like symptoms non-invasively, so they can be treated before potentially infecting other individuals.

The Thermo Mirror is a mass-market version of that machine from two years ago.  Using infrared thermography, it zones in on a specific point of your face — such as the center of the forehead — and measures the skin temperature right at that moment.  The process starts as soon as you face the mirrored part, which also displays the temperature in either green (when you fall at or below the threshold) or red (when you’ve got a fever going).

Since skin surface temperature can change depending on the surrounding environment, the machine automatically adjusts its threshold to compensate.  That means, there’s no need to manually program temperature levels — it will handle that part of the business all on its own.

Two models of the Thermo Mirror will be available: SX-01A and SX-01B.  Both work in a similar manner, with the latter getting the ability to interface with external devices (for manually triggering checks, for instance).    Pricing for the two products are  ¥98,000 and ¥120,000, respectively.