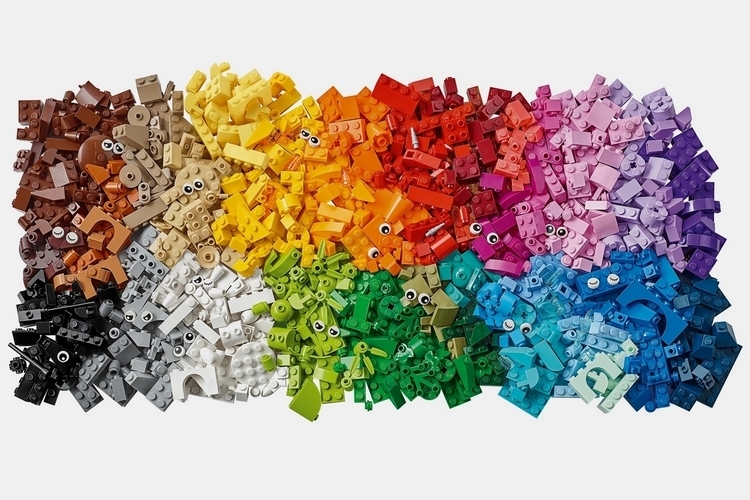 We know, LEGOs aren’t just for kids anymore. Despite the growing range of LEGO sets specifically aimed at adults, though, the brick-based construction toy remains a great toy for kids – one that can help develop fine motor skills, problem solving, and lateral thinking. Not to mention, they can make for hours of fun, especially for kids who like getting creative and thinking out of the box with their LEGO creations.

As far as LEGOs go, there’s a big distinction between sets made for kids and sets created for adults. The former is focused on fun and play, while the latter is typically designed to challenge the builders. Sure, a little challenge is fun for kids, too, but too much and they could get bored, give up, and switch to something else instead. As such, when shopping LEGO sets for kids, it’s usually best to stick to models aimed specifically at their age range.

Here are some sets we think will be worth your time to check out. 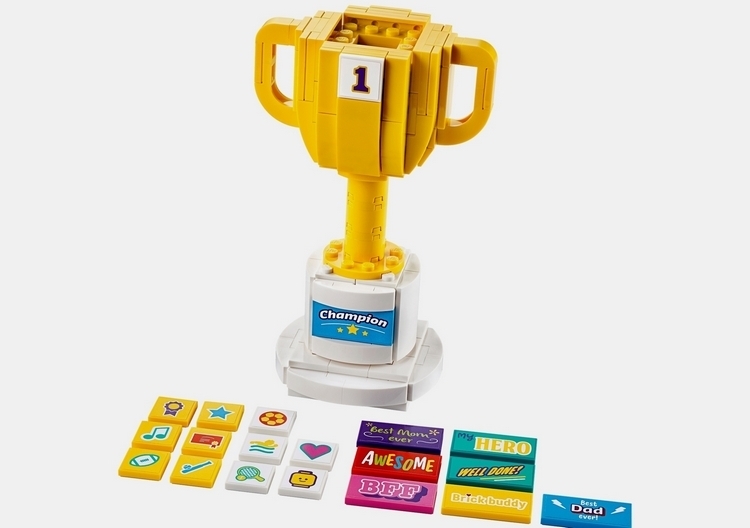 Some kids get trophies for academics. Others get them for sports. With the LEGO Trophy, kids don’t even have to get them for anything, they can just make their own. It comes with assorted stickers that let you change the theme of the 5-inch trophy at a whim, making it a music award for being “awesome” one moment and a heart-decorated award for amazing BFF feats the next, allowing kids to award to each other for whatever purpose they deem fit at any given moment. At 200 pieces, it should be quite the easy build, too, making it ideal for construction toy novices. 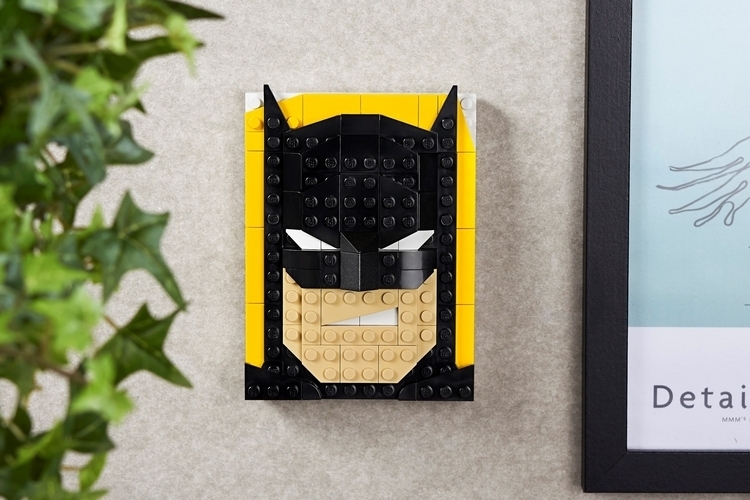 We’re big fans of LEGO’s new Art sets, which allow you to create 2D pixel images of various pop culture characters. As fun as it will be for kids to build something they can mount up a wall, the sets in that collection range in the thousands of pieces, making them a bit too tough of a challenge for young brick builders. The Brick Sketches line should offer a more age-appropriate alternative and this Batman set from that collection is arguably the best of the lot. Consisting of 115 pieces, this should make for a set they can put together in an hour or so, giving them a sneering portrait of the Caped Crusader they can hang up their bedroom wall.

LEGO BrickHeadz The Mandalorian & The Child 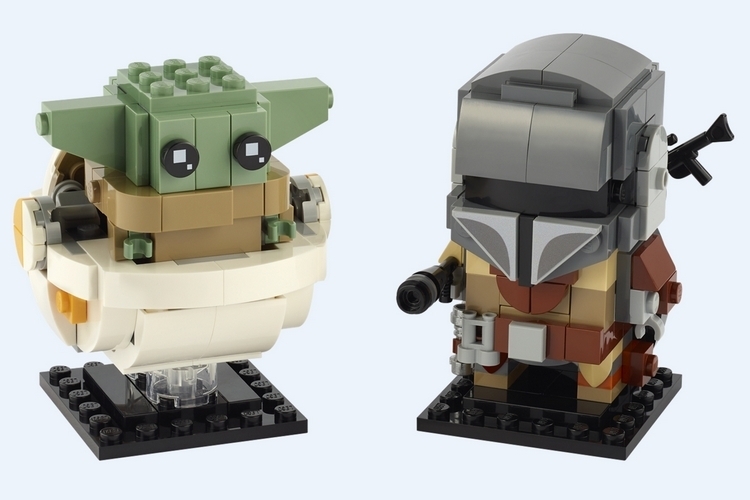 How can you go wrong with a gift of Baby Yoda? You can’t. This LEGO set combines the Force-sensitive green alien with his bounty huntin’ protector, allowing kids to play with two of the year’s most popular pop culture characters in that adorably goofy BrickHeads form. At 259 pieces, this isn’t exactly the easiest build for little kids (it’s recommended for 10 years and older), but we imagine the amount of play you can get out of Din Djarin and The Child will make assembling the whole set very satisfying. 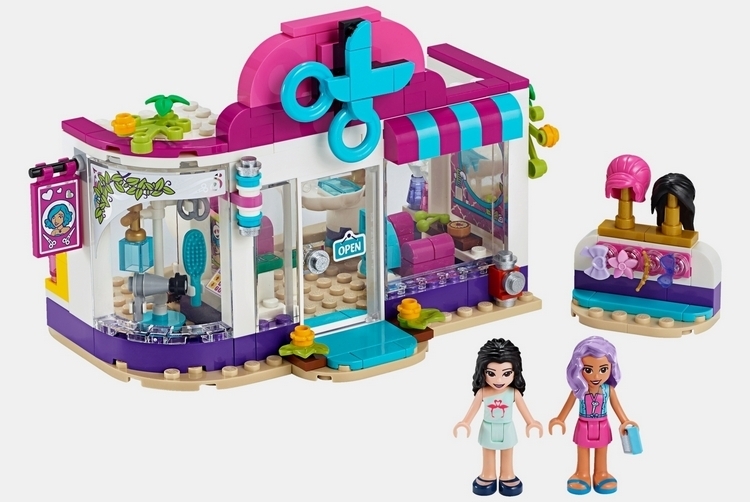 To the unfamiliar, LEGO Friends is a line aimed squarely at young girls, in the hopes of getting more of them into construction toys. This particular set casts two of the recurring characters, namely Nina and Emma, with their very own hair salon, which includes individual stations for washing, cutting, and styling, along with plenty of accessories, such as wigs, brushes, scissors, hair dryers, hair clips, and more that you can place in any of the two mini-dolls’ claw-shaped hands. Yes, they call them mini-dolls to differentiate from the standard minifigs. 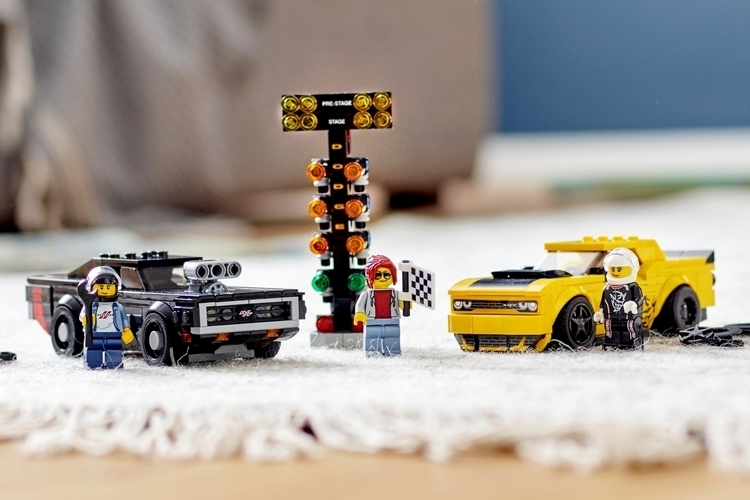 No, these aren’t the best toy cars you can get from LEGO. Those would be the models available from the more advanced Technic collection. This two-in-one set, however, gets you a pair of American muscle cars that most kids can put together on their own, whether for racing side-by-side across a tabletop, driving towards each other on a wild collision, or getting serviced by a fleet of minifigure mechanics. It comes with two race car driver minifigures, each of which can be sat inside the car via the removable windshield, as well as a race marshal minifig and an awesome tree-style start light that you can integrate into nearly every single race car set you own. 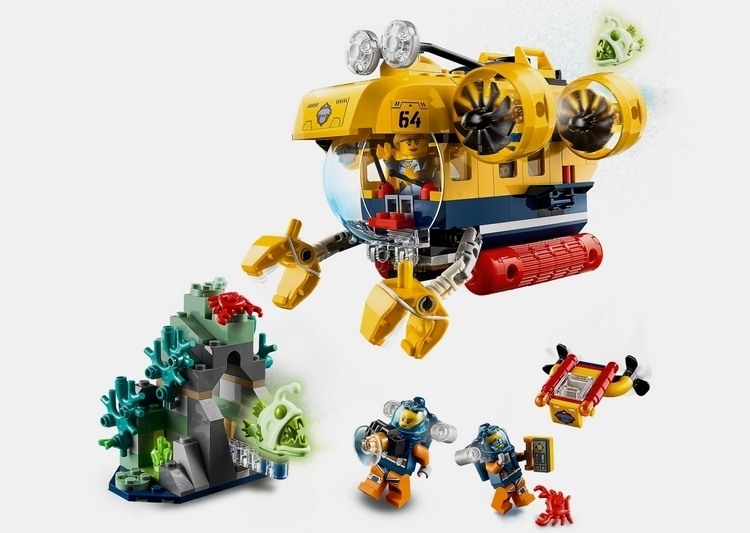 The LEGO City collection will probably be your best at finding age-appropriate sets with familiar themes, as they, basically, sell models based on things you encounter every day. For an affordable set from this line, we really dig this ocean exploration set that lets you build an awesome-looking underwater sub with claws that you can use to find and retrieve sunken treasures, shipwrecked vessels, and scary creatures from the deep. Set also includes an underwater drone, a coral-covered seabed setting, and four minifigures. 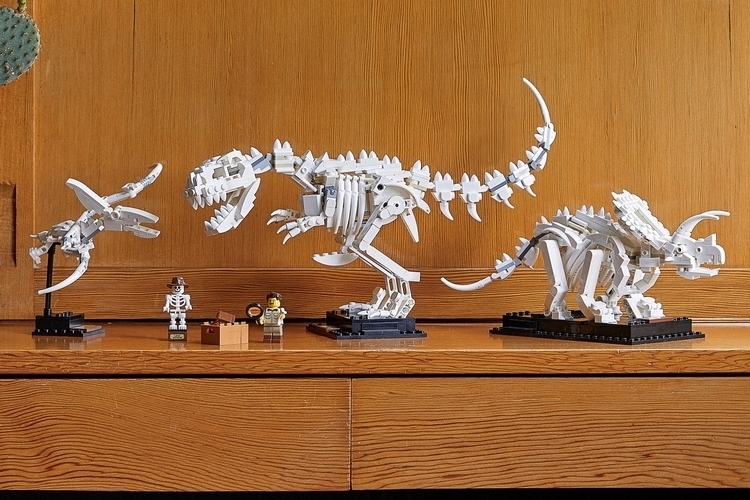 We know, this isn’t exactly a set aimed at kids, with a 16 and up recommendation. If I was a kid, though, I’d gladly give up my Halloween candy in exchange for this awesome set, which gets you LEGO fossil recreations of a 15-inch long T-rex, a triceratops, and a pteranodon, allowing you to turn any shelf into a veritable dinosaur museum. They’re all done at 1:32 scale, too, so the creatures size up realistically to each other. All the fossils come with their own display stands, a crate full of dinosaur elements (egg, bones, and more), and even a fossilized archeologist for the heck of it. 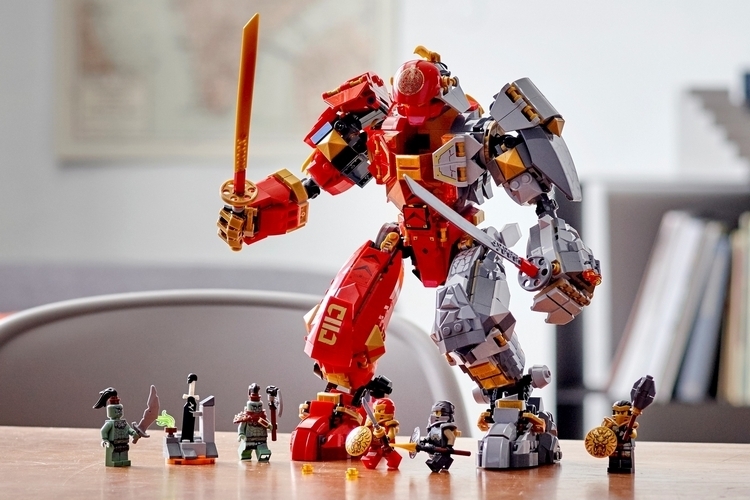 For kids who like ninjas and mechs with equal aplomb, could there be anything better than this downright wild set, which lets you build a 10-inch tall battle mech styled like a robot ninja. Equipped with giant swords on each hand and stud-firing blasters on the left wrist, it’s ready to go all-out crazy on anyone in its path, with articulation on the arms and legs allowing you to pose it in various fighting stances. The 968-piece set comes with five Ninjago characters, namely Hero Kai, Hero Nya, Hero Cole, Moe, and Murt, up to two of which can fit in the mech’s cockpit to pilot it at any time.

LEGO Minecraft The Creeper Mine 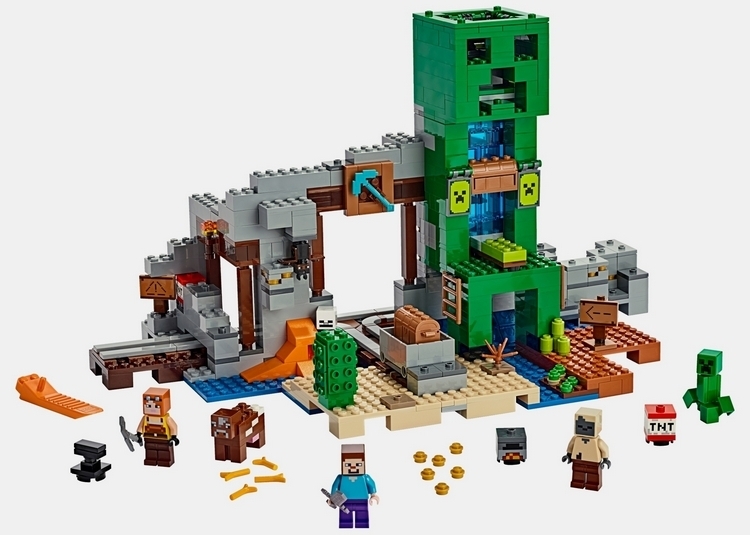 Strictly for kids who actually play Minecraft (much of it will make no sense otherwise), this themed set lets you build your own creeper mine from the game, so you can dig up heaps of gold right from your tabletop. It’s got the iconic creeper tower serving as the centerpiece of the structure, which stores all the gold that’s been recovered from the mine, along with a working rail track with a mine cart, an irrigated vegetable patch, and even a comfy shelter for when all that mining gets you tired for the day. It comes with three standard minifigs, a Creeper minifig, a husk, and a whole bunch of accessories. 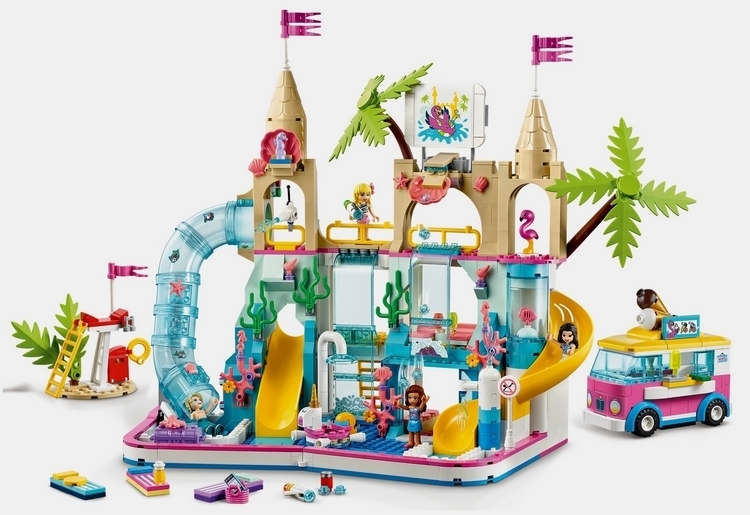 This set lets you build a large water park, with thrilling slides, winding tubes, and multiple levels, all stationed atop a large pool. It’s filled with plenty of detailed items, such as a relaxing hot tub, a locker section for your gear, a lifeguard station, a unicorn pool float, and ornate decorative elements all throughout. The set comes with four mini-dolls, namely Stephanie, Emma, Olivia, and a requisite lifeguard figure. 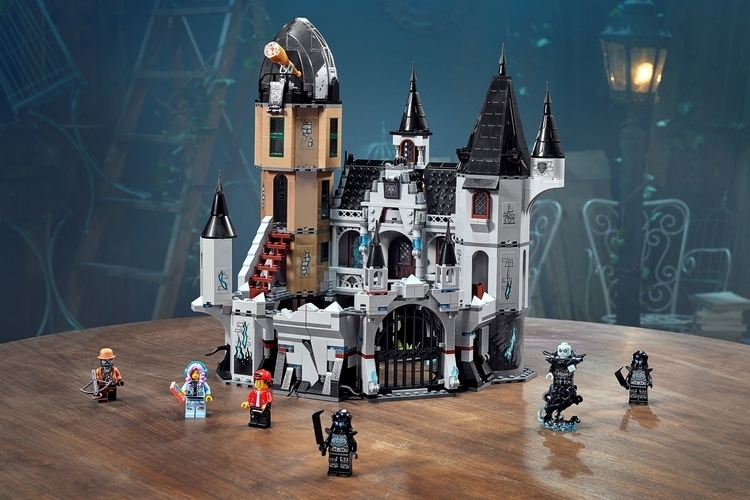 Got a kid who likes spooky stuff? Spook them for Christmas with this haunted castle set, which measures a whopping 13 x 12 x 10 inches (height x width x depth). Styled like those gothic castles you’ll frequently find in horror media, it’s got ornate towers, pointed arches over vaulted ceilings, and vertically-oriented rooms. Seriously, it’s the kind of place you expect a cult of medieval vampires to be living in. It’s got a spacious courtyard where dastardly things can take place, along with fully accessible rooms across three levels where all manners of supernatural horrors probably occur as we speak. The toy, by the way, is designed to work with the Hidden Side app, which can add augmented reality “ghosts” to the set for that extra hint of spook. 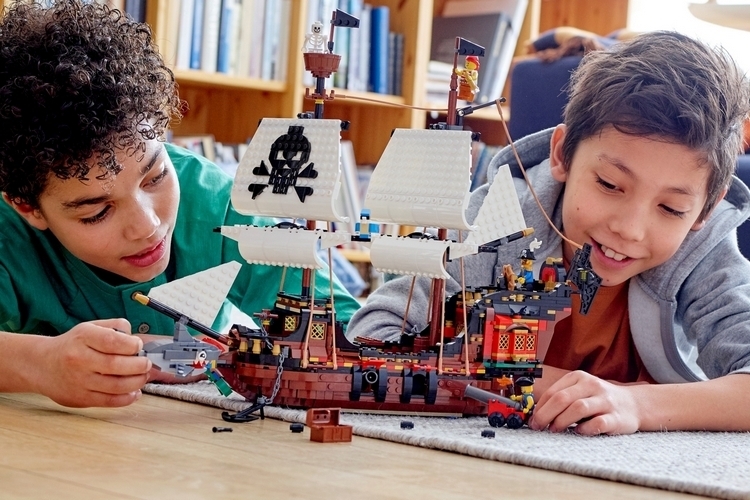 Got a kid who loves pirates? Give them their fill with this 3-in-1 set, whose bricks you can use to build either a classic pirate ship you can sail across the seas, a pirate’s inn where local swashbucklers can gather at the end of the day, or an island with a giant skull statue in its center. And if that’s not enough, you also get tons of extra elements, including a shark, a skeleton, small boats, swords, and more, along with three pirate minifigures ready to burn and pillage everything in sight. 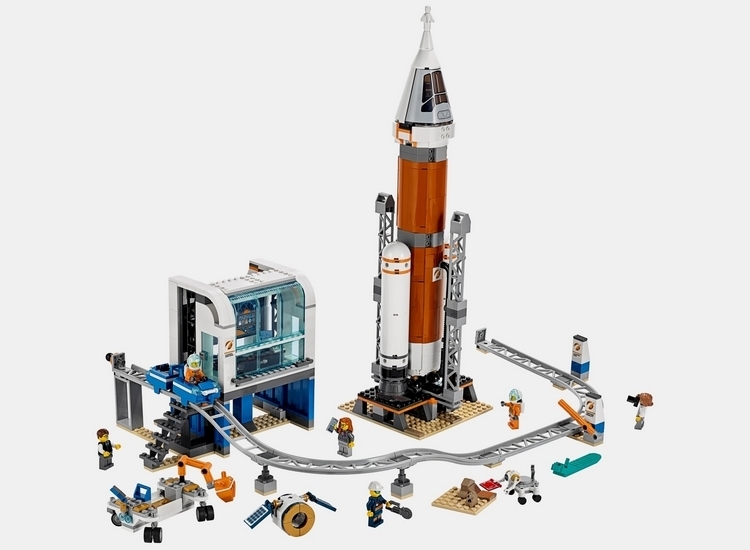 Rockets and space have long been staple toys for kids and this construction set continues the tradition. Made up of 837 pieces, the set lets you build a multi-stage rocket with cockpit, booster, and payload storage modules, with the whole thing connected by a railway to a building that serves as research area and launch control tower. There’s a launchpad with tower arms that open during takeoff, a two-car rail cart for moving between launchpad and tower, a space rover with an articulated grappling arm, space telescope, and more. It comes with six minifigures and one robot figure. 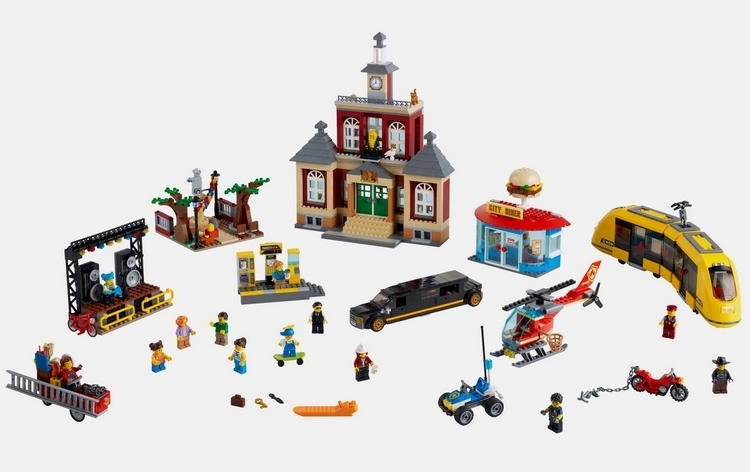 For those more willing to splurge, this set lets you build a full-fledged city square, with a two-level town hall, a city diner with a giant burger statue on top, a park, a concert stage, and a tram station. As with any bustling city, there are plenty of vehicles in the set, including a stretch limo for the mayor, a handyman wagon, a motorbike, a helicopter, and even a passenger tram for all the other minifigures that don’t get their own ride. All the buildings and vehicles are individually-bagged, too, so kids can have an easier time sorting through the 1,517 pieces. They throw in 14 minifigs, by the way, for easily populating your city center with a bunch of new friends.