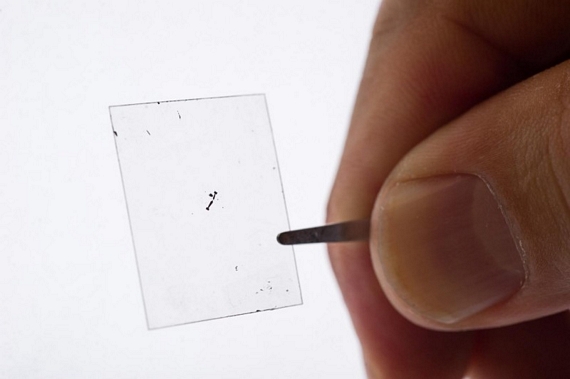 The mechanical generation of electricity has previously been predicted on molybdenum disulfide (MoS2), an anatomically-thin material that’s transparent, lightweight, and highly bendable.  However, it hasn’t been produced in an actual lab setting.  Until now, that is, with Researchers from Columbia Engineering and the Georgia Institute of Technology developing the world’s thinnest electric generator.

On the report published in the journal Nature, the team demonstrate the piezoelectric effect in the two-dimensional material, making it the thinnest object in the world to ever show the power-generation ability.  This observation provides a new lab-proven property for two-dimensional (2D) materials, opening the doors for a different breed of future kinetic generators.

Why is this significant?  The level of thinness of MoS2 (it’s, literally, just a single layer of atoms) means it’s possible to integrate it into ultra-small wearables as a module for power production that can be fed to the onboard battery to power the device.  The fact that it’s transparent, lightweight, highly bendable, and very stretchable also means it can be integrated not just on the cases of smartwatches, but on shirts, wristbands, socks, and other items that won’t be able to handle the size and weight of current materials used in kinetic generators.

Most of this team, by the way, are the same group of guys who demonstrated back in 2008 that graphene, another 2D carbon form, is the strongest material in the world.  Yeah, they’re kind of into 2D materials, which is awesome because it’s about time 2D got the respect it deserves.  Seriously, 3D is all hype.

You can check out the full report from the link below.