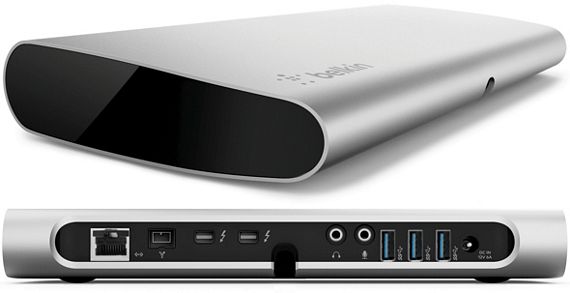 Apple’s Thunderbolt ports are pretty great, with the simultaneous 10Gbps upstream and downstream capabilities.  At this day and age, though, it’s really still rare we’ll need to transfer that much data over cables, so might as well use that port to tidy up your mess of a work desk.  That’s exactly what the Thunderbolt Express Dock will allow.

Made by Belkin, it’s an IO hub that connects to your Mac’s Thunderbolt port then offers all the ports and connectors you need right from its compact frame.  That way, you can spare your work desk the hassle of multiple threads of wires snaking through from your MacBook to your various gadgets — just hook this up, hide it in a drawer, and all you’ve got is a single cable to deal with.

Seriously, the Thunderbolt Express Dock bundles so many ports, we can’t see a reason why you’ll still need to plug anything else directly to the computer.  It has three USB 3.0 ports, two Thunderbolt ports, one Firewire slot, an Ethernet slot and even audio IO (mic/headphones).  Even better, it supports daisy chaining of Thunderbolt devices — up to five of them.  The hub does need its own independent power source, though, so you’ll have to plug it in to an available outlet.  On the other side of this is a single Thunderbolt slot, which will be what you connect with the computer.

Why hasn’t someone made anything similar to the Thunderbolt Express Dock before? Personally, building a gadget that can handle all that IO while communicating with the PC from a single interface is probably very difficult.  And if Belkin really did pull this off and it works reliably (haven’t tried it myself), this is kind of a big deal.  Price is $299.99.