Tiret Gotham Collection: Watches For The Dark And Dreary 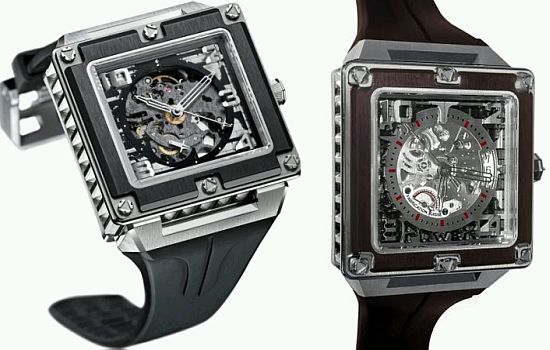 If Bruce Wayne wore a watch, what would it look like?  Horology company Tiret New York tried to imagine the answer to that question and came up with this – the Gotham Collection.

Inspired by the Batman universe’s version of New York City, the timepiece looks every bit as dark as the setting that inspired it.  Sporting art deco sensibilities and modernist flair, it’s a piece I can definitely see the millionaire vigilante rocking.

The Gotham Collection consists of two models, one chronograph (brown bezel and strap in the picture) and one power reserve (black bezel and strap).  Both  are decked in a variety of fine materials, including white gold, steel, ceramic and natural rubber.  Buyers can also request precious gems (preferably stolen or cursed – hey, it’s Gotham City) to be added to the mix.  They use Swiss ETA 2897 movements for the time-telling mechanism, with a Valjoux 7750 for the chronograph.

Both models feature plenty of details on the face, making it extremely busy to look at – the same way you’d probably feel watching Gotham from the roof of a tall building.  Of course, there’s no way Batman would actually wear this thing (there’s no Bat logo and no space for gadgets), but his alter-ego should look dapper with that chrono model wrapped around his wrist (and, maybe, a Bat Umbrella in hand).   Yep, he might even give the power reserve one as a Christmas gift to Alfred.  Robin only gets a plastic watch, though – he’s a dork.

The Tiret New York Gotham Collection has been limited to 300 pieces.  No word on price, but I’ll bet it’s as scary as the streets of the comic book city that inspired it when residents of Arkham Asylum breaks loose.

[via A Blog To Read]